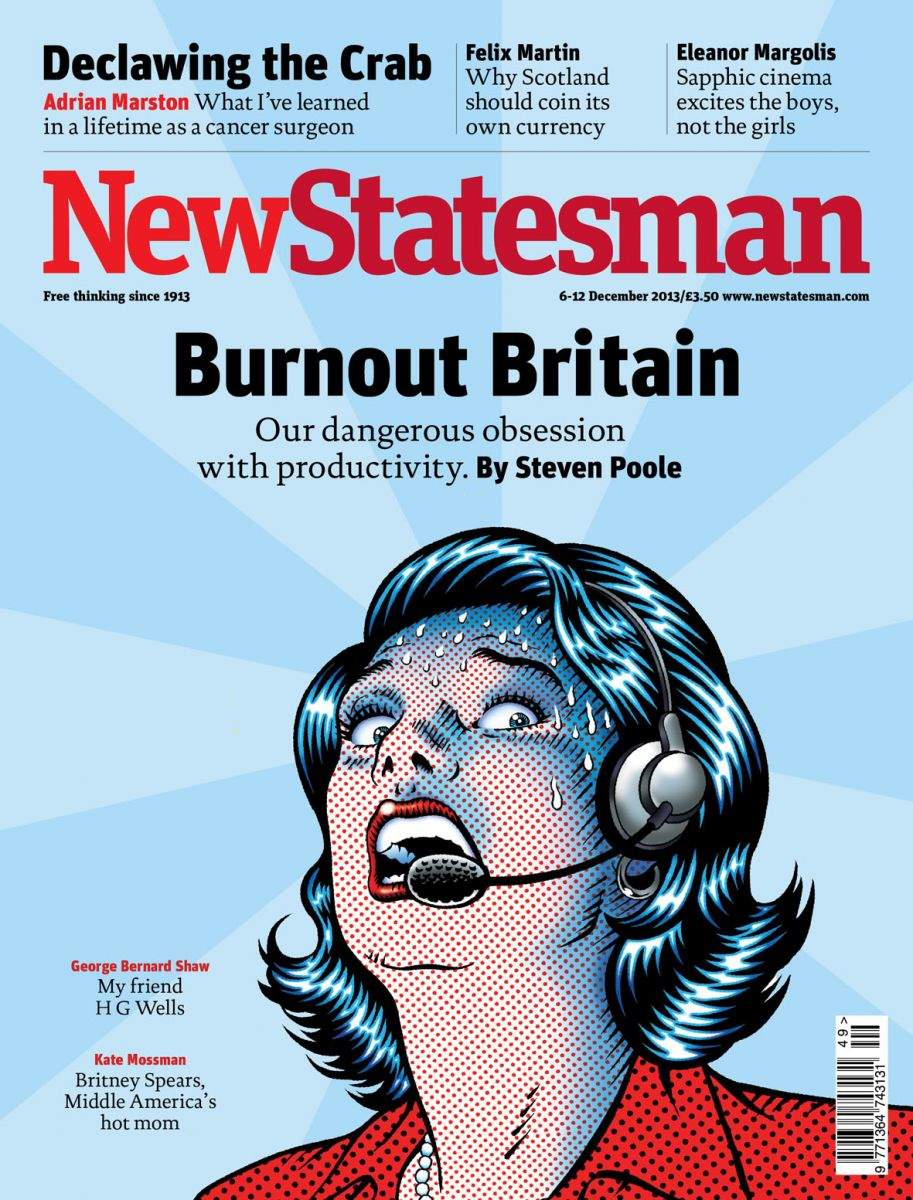 COVER STORY: BURNOUT BRITAIN AND THE CULT OF PRODUCTIVITY

THE POLITICS INTERVIEW: THE NEW HOME OFFICE MINISTER NORMAN BAKER ON WORKING IN “ENEMY TERRITORY”, THE DEATH OF DAVID KELLY

SOPHIE McBAIN REPORTS FROM BLACKPOOL, A “DUMPING GROUND” FOR THE SOCIALLY EXCLUDED

MEHDI HASAN: WE MUST NOT TREAT THE EUROZONE CRISIS AS A MORALITY TALE ABOUT “LAZY” SOUTHERNERS

FELIX MARTIN, AUTHOR OF MONEY: THE UNAUTHORISED BIOGRAPHY, ON WHY SCOTLAND SHOULD COIN ITS OWN CURRENCY

THE SURGEON ADRIAN MARSTON: “CANCER” IS NOT A DIAGNOSIS, IT IS A LABEL

ANTONY GORMLEY ON ART FOR EVERYONE IN THE NS CENTENARY INTERVIEW

COVER STORY: THE CULT OF PRODUCTIVITY

For this week’s cover story, the author and journalist Steven Poole examines our dangerous obsession with productivity from footballers’ work rates to the world of Big Data.

We are everywhere enjoined to work harder, faster and for longer – not only in our jobs but also in our leisure time. The rationale for this frantic grind is one of the great unquestioned virtues of our age: “productivity”. The cult of productivity seems all-pervasive. Football coaches and commentators praise a player’s “work rate”, which is thought to compensate for a lack of skill. Geeks try to streamline their lives in and out of the office to get more done. People boast of being busy and exhausted and eagerly consume advice from the business-entertainment complex on how to “de-fry your burnt brain”, or engineer a more productive day by assenting to the horror of breakfast meetings.

A corporate guru will even teach you how to become a “master of extreme productivity”. (In these extreme times, extremity is always good; unless, perhaps, you are an extremist.) No one boasts of being unproductive, still less counterproductive. Into the iron gate of modernity have been wrought the words: “Productivity will set you free.”

But, writes Poole, doing nothing may be the best thing for your well-being and your brain:

According to Andrew Smart’s book Autopilot, recent (but still controversial) brain research recommends that we stare vacantly into space more often. “Neuroscientific evidence argues that your brain needs to rest, right now,” Smart declares on the first page. (It took me a long time to finish the book, because I kept putting it down to have a break.)

Smart’s evidence suggests the existence of a “default network”, in which the brain gets busy talking to itself in the absence of an external task to focus on. To allow this “default network” to do its thing by regularly loafing around rather than switching focus all day between futile bits of work, Smart argues, is essential for the brain’s health. “For certain things the brain likes to do (for example, coming up with creative ‘outside of the box’ solutions),” he writes, “you may need to be doing very little.”

In a candid interview, the Liberal Democrat minister Norman Baker talks to George Eaton from his new berth at the Home Office about working in “enemy territory”, the “unfinished business” surrounding the death of the government scientist David Kelly, and the Lib Dems’ betrayal over student fees.

Baker on the death of David Kelly:

It is just 13 minutes before I succumb to the temptation to ask him whether he still favours a new public inquiry into Kelly’s death. So exercised was Baker by the event that he stood down from the Lib Dem front bench in order to devote a year to writing a 424-page book (The Strange Death of David Kelly) on the subject. “People who attack it by and large haven’t read it,” he says. “And I’d like them to come back and deal with the facts, if they want to deal with the facts, ten years on, but I concluded in 2007 that it was unfinished business and nothing much has moved since then.” Will he use his new berth at the Home Office to lobby for an inquiry? “What would have to happen is: the Attorney General would have to reopen the inquest, which was absurdly curtailed. So that’s a matter for him.”

Baker on the Home Office:

Baker does not attempt to hide the extent of his disagreement with the Home Secretary, describing the atmosphere as “hostile”. “It’s no secret that the Home Office is quite a political department and that the Lib Dems and the Tories probably have more challenges in reaching common positions in that department than in many others,” he tells me.

Baker – who admits that “the only time in government that I’ve come close to resigning” was when the Lib Dems broke the “Vote for Students” pledge and backed rises in tuition fees – maintains, “Education should be free.”

“I’m very conscious that people of my generation benefited from free education. I come from a poor background, unlike most people in government, and I couldn’t have got where I was without a really good state education. I’m deeply grateful for that and I couldn’t have done it had I had to pay a lot of money for it, so I feel particularly uncomfortable with the idea of charging for tuition fees as a principle.”

In a meeting with the NS’s political editor, Rafael Behr, László Andor, the European commissioner for employment, social affairs and inclusion, explains that David Cameron’s bullish position on the EU risks giving the UK a bad image abroad and could jeopardise the whole European project.

On 1 January, the EU will lift temporary limitations on the rights of Romanians and Bulgarians to enter the UK labour market. That threshold, I suggest to Andor, combined with Conservative fears of Ukip and tabloid hysteria, are the reasons behind Cameron’s aggressive posture.

“It is regrettable that the Prime Minister is under such pressure,” he concurs, adding that other EU leaders have faced similar resistance at home. Is the UK debate unusually toxic?

The sceptics’ main target is employment protection, which many Conservatives consider a burden on enterprise but the rest of Europe sees as vital for a level playing field. . . Employment protection is “one of the cornerstones of the single market”, Andor says. He doesn’t expect Cameron to have any better luck renegotiating free movement. “If you start thinking of raising walls to migration, others will start to think about raising barriers to cross-border capital movements or trade. Then the whole structure is going to unravel.”

MEHDI HASAN: THE EUROZONE CRISIS IS NOT A MORALITY TALE ABOUT “LAZY” SOUTHERNERS

As the suffering and despair caused by austerity intensifies in southern Europe, Mehdi Hasan warns that the scapegoating of countries such as Greece and Spain over the eurozone crisis is both wrong and hypocritical.

It is dangerous, misguided and mendacious, as countless economists from the New York Times columnist Paul Krugman to the Financial Times commentator Martin Wolf have pointed out, to treat the eurozone’s ongoing debt crisis as a modern-day morality tale. It isn’t.

Record debts were caused by post-crash bank bailouts and a crisis-induced collapse in tax revenues. Take Spain. That country’s downturn was the result not of excessive government spending or public debt but of the explosion of private debt, particularly in the real estate and banking sectors. Because of the crash, Spain’s public-debt-to-GDP ratio morphed from being one of the lowest in the eurozone to one of the highest.

Another reason why we shouldn’t moralise about debt is to avoid the charge of rank hypocrisy. After all, why pick on the Greeks, rather than the Germans? In the years before the crash – for example, from 2003 to 2004 – Germany persistently breached the budget deficit rules laid down in the EU’s growth and stability pact; the then chancellor, Gerhard Schröder, demanded that his country be exempted from any penalties. In 2006, while Spain and Ireland were running budget surpluses, Germany was in deficit.

SOPHIE McBAIN: HOW BLACKPOOL BECAME A “DUMPING GROUND” FOR THE SOCIALLY EXCLUDED

The NS writer Sophie McBain reports this week from Blackpool as the holiday season ends and “around 2,500 people become unemployed overnight”.  Like many other seaside towns, Blackpool, writes McBain, has become a place of last resort for the socially excluded, unemployed and those involved in substance abuse.

Two hundred metres inland from the promenade, pebble-dash terraces that were once guest houses and B&Bs have been converted into bedsits renting for around £65 a week and attracting a new kind of visitor. Blackpool has become a town where “you can turn up with a bin bag and £150 and you can get a flat,” says Simon Blackburn, leader of Blackpool Council.

We meet in his office in Bay House, a shelter for homeless young people at the end of a street full of run-down bedsits. Here in South Shore, a two-bedroom house is currently on sale for £40,000. Low property prices and fond memories of childhood holidays do attract newcomers, but, says Blackburn, “One of the main reasons someone comes here is because something’s gone wrong in their life.”

Despite facing the prospect of having its budget slashed by half, Blackpool Council is planning to focus its limited resources on an overhaul of the town’s housing stock in the hope that this will help improve individual well-being, unemployment and anti-social behaviour:

Councillor Gillian Campbell is responsible for the selective licensing scheme [which will ensure private landlords maintain certain standards of property management] and often accompanies housing enforcement officers on their visits. “Some of the places we’ve come across have been absolutely awful. You wouldn’t let a rat live in them. It’s been disgusting and quite heartbreaking as well, because some people are used to it, they don’t think they deserve better,” she tells me. Some of the houses she’s visited have had no heating or warm water, or indeed no plumbing or water at all. The team has seen collapsed ceilings, dangerous damp, exposed wiring and people living with dead and decomposing animals. At one point, after carefully checking whether I’ve eaten, Campbell whips out a photo of a corner bath filled to the rim with urine, faeces and loo roll.

In this week’s Politics Column, Rafael Behr argues that, having made the coalition work, Nick Clegg should now position his party as a guardian of the middle way while the two larger parties fight it out:

Clegg will not match Osborne’s pledge to keep cutting through the next parliament until the Budget is in surplus. Nor does he agree with the Chancellor that all future deficit reduction should be achieved without raising taxes. “It can’t be done,” a close ally of the Deputy Prime Minister tells me. “Or rather, it can be done but not if you care about distributional fairness.” The Lib Dems will let the Tories campaign for ever-stingier benefits, while they promise a “mansion tax”.

So why, if Clegg has stuck to the “liberal centre” so carefully, does his party still languish so low in the opinion polls, asks Behr:

Standard surveys of national voting intentions ask the wrong question where potential support for his party is concerned. In a close race, what matters is whether, in constituencies where Lib Dem candidates have a chance, people see them as a possible insurance policy against undiluted rule by whichever of the big two parties they like less.

Eleanor Margolis joins the “bespectacled butches” at a screening of

Blue Is the Warmest Colour

Will Self on the joys of the hermaphroditic hot dog