In the form of today’s unemployment figures, Christmas has come early for David Cameron. Joblessness fell by 99,000 in the last quarter to 2.39 million (7.4%), the lowest level since May 2009, while employment rose by 250,000 to 30.09 million (although the rate, at 72.0%, remains below its pre-recession peak of 73.1%). The coalition now has an unarguably good story to tell on jobs, something we can expect Cameron to make much of at the final PMQs of the year today.

But these headlines figures mask some worrying trends. Total pay, including bonuses, rose by just 0.9%, a real-terms cut with inflation at 2.2% over that period. In the public sector, pay fell in nominal terms by 0.3% (and will continue to fall in real-terms until at least 2015-16 due to George Osborne’s pay cap).

As well as enduring a living standards crisis, with the longest fall in wages since 1870, the UK is also suffering from a crisis of underemployment. There are now a record 1.47 million people working part-time because they can’t find full-time jobs. 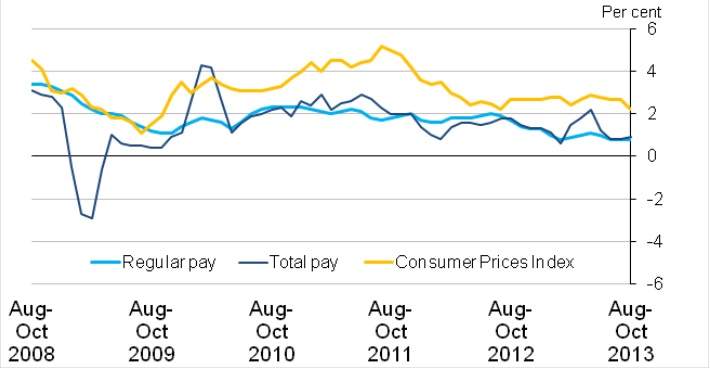 The Tories remain confident that wages are a “lagging indicator” and that higher output will translate into higher salaries. As Osborne remarked after the publication of the most recent GDP figures, “If Britain is growing then the finances of Britain’s families will start to grow.”

For Labour, this optimistic analysis proves that the Conservatives have failed to grasp that the crisis is not merely cyclical but structural. The link between higher growth and higher wages has been severed and will not be easily repaired. Ed Miliband’s team point to the pre-crash period, when incomes for millions of low-and middle-income earners stagnated even in times of strong growth, as evidence that the market can no longer be relied upon to deliver for the majority. In an economy as unequal as Britain’s, any gains quickly flow to the top. If, as forecast, wage growth returns next year, it will be of the unbalanced kind seen in April, when high earners collected their deferred bonuses in order to benefit from the reduction in the top rate of tax (the one month since May 2010 in which real incomes rose).

If Labour is right, it is hard to see the Tories winning the credit they hope for the recovery. Confronted by Miliband’s “cost of living” offensive, their instinct remains to shift the debate back to the macroeconomy. But they should be wary of relying on this line of attack. To most voters, after all, living standards are the economy.