Since the opening of the first underground railway in London 150 years ago we’ve settled on a mix of different ways for moving people through cities – train, tram, bus, car, bike, bus, foot. Through the years, though, major cities could afford to experiment with some pretty far-out technologies – and so it is with the London Pneumatic Despatch Railway (LPDR), a Futurama-ish tube that carried parcels and people beneath the capital in the 1860s.

I first stumbled across the LPDR when reading up about pneumatic tubes after Elon Musk announced his Hyperloop idea. If you missed it, he wants to send people in capsules through a 570km-long pneumatic low-pressure tube from Los Angeles to San Francisco at speeds of up to 962km/h (yeah, really). I read that, then saw this: 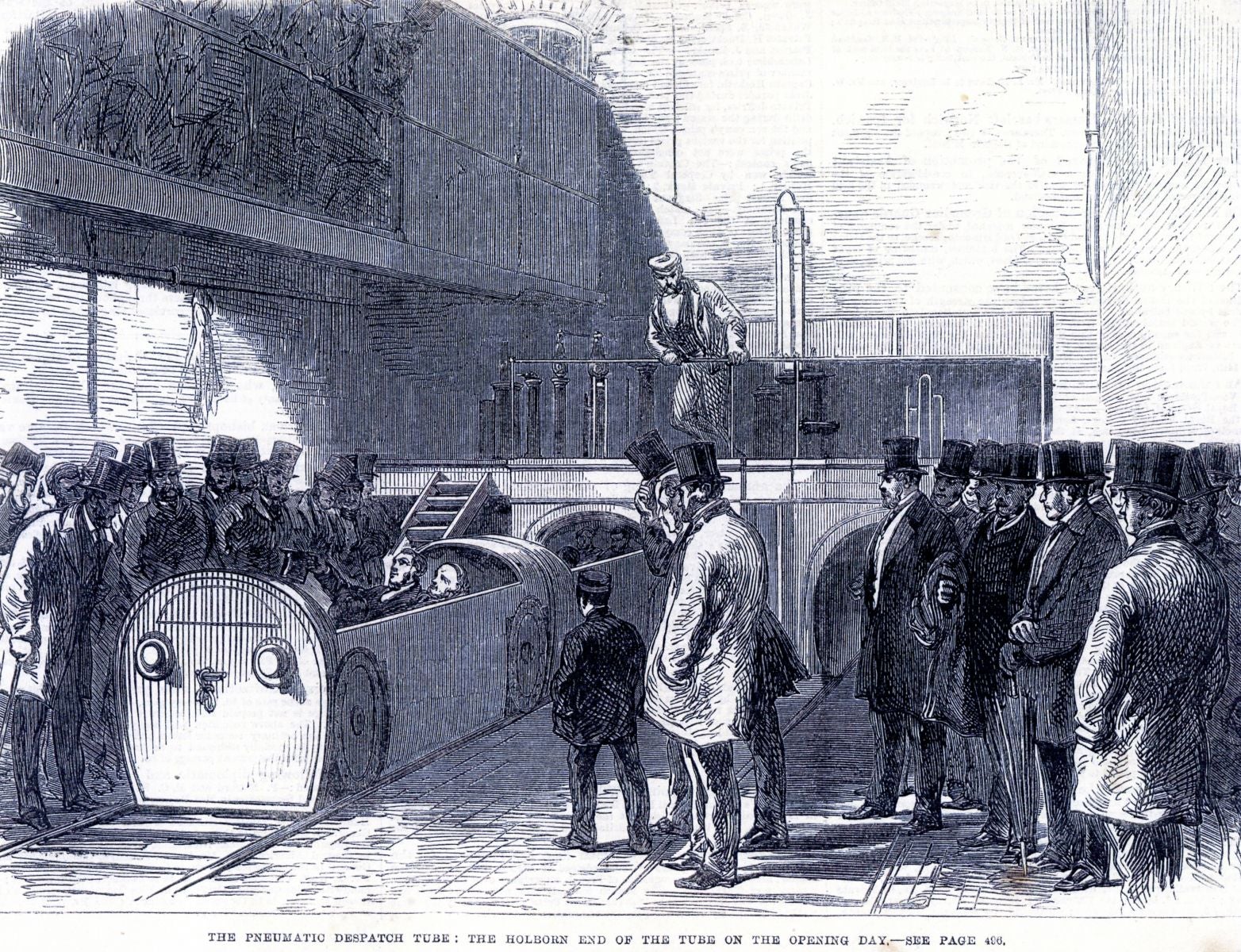 That’s a party of Victorians gathered around a “pneumatic despatch tube”, and they look like they’re going to send those two men through it in a carriage. What the hell was this thing?

To find out, I asked Julian Stray, the senior curator of the British Postal Museum & Archive (BPMA) – and the story begins in the middle of the 19th century, at the height of the British Empire. And you’ve got to deal with mail. It’s all about mail.

“The General Post Office (GPO) was the routing hub of the whole country,” Stray explains. “You would have had the foreign mails, the inland mails, the country mails, the mails to the provinces. Speed is everything. A loss of two minutes required a written explanation to one of the directors or the Postmaster General.”

The bandwidth of this system was throttled by the narrow streets between the stations on London’s edge and the GPO sorting office in the middle near St Paul’s Cathedral – horse and carriage traffic jams could have Empire-wide knock-on effects – and, in an example of what Stray calls “that Victorian endeavour, that willingness to have a go regardless of the cost of failure”, some canny entrepreneurs spotted a business opportunity.

A group of men came together to form the Pneumatic Despatch Company. Its board was headed by the 3rd Duke of Buckingham, a close friend of Disraeli’s. Also involved were bookstore magnate WH Smith (yes, that WH Smith), and Thomas Brassey, an engineer who was one of the key players in the Victorian era’s “railway mania”. They were going to build a new kind of underground railway. 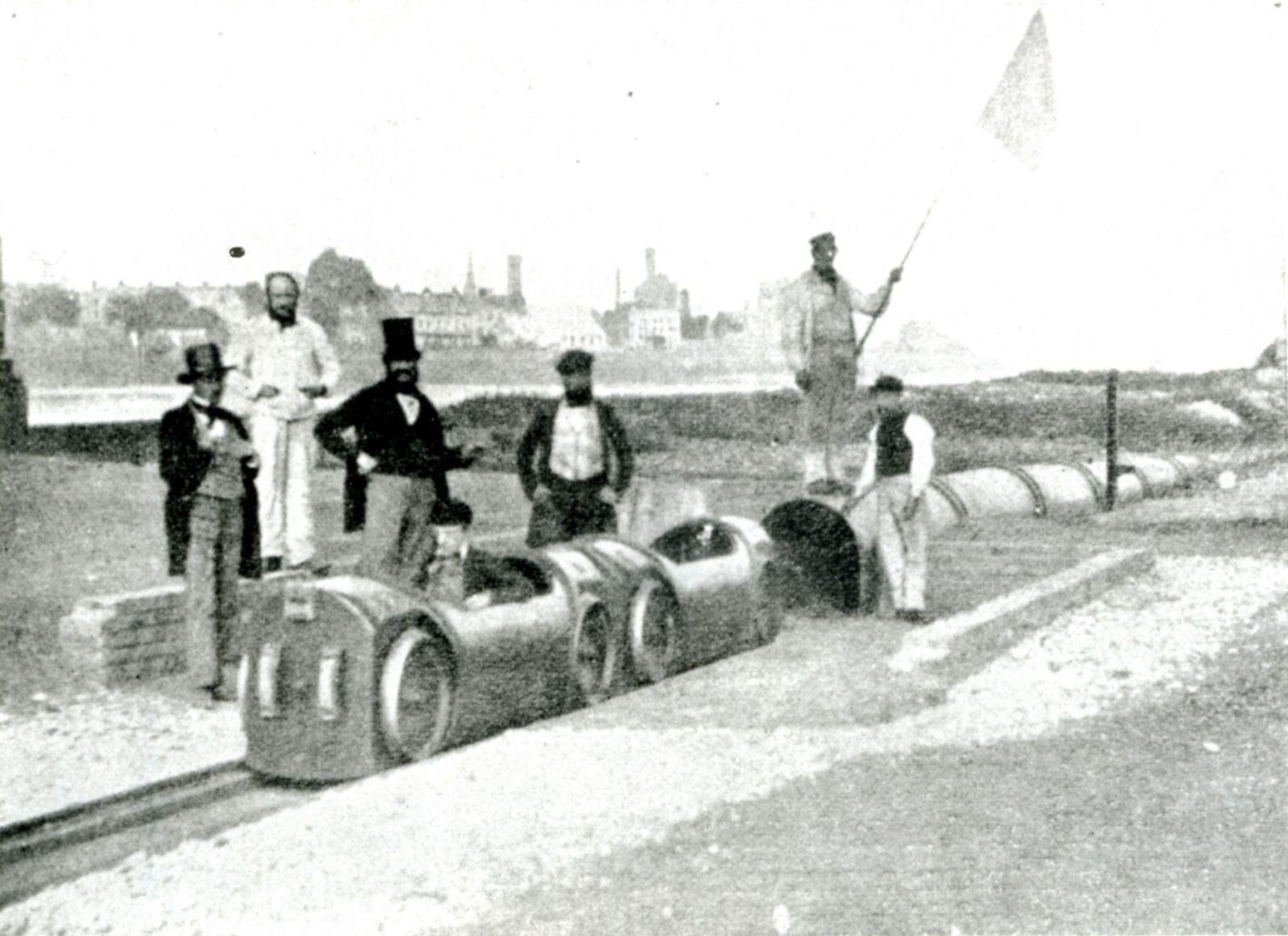 In the summer of 1861, Thames steamship passengers floating past Battersea Pier would have seen a curious experiment laid out on the river bank. 411m of cast-iron tunnel, 80cm tall and a little bit narrower than that wide, with carriages disappearing into one end and reappearing at the other. It was a pneumatic tube, big enough for bags of mail – and people. Grinning lads would climb into the carriages, lie under a blanket, and get fired along the tube at speeds up to 30mph.

Pneumatic tubes are still around today, in places like hospitals and banks. Most major cities in Europe and North America had their own pneumatic telegraph networks in the latter half of the 19th century, before the electrical telegraph took over – though some networks lasted for decades beyond then. François Truffaut’s 1969 film Baisers Volés features a scene with a character sending a letter via Paris’ still-operational pneumatic telegraph:

The modern pneumatic capsule system was invented by engineer William Murdoch in the 1830s. These were tubes of a few inches in diameter, designed to carry small, light items, like letters. Powered by a steam engine, they worked on the principle of suck or blow (and that’s not how Musk’s Hyperloop would work, by the way, which achieves its high speeds by sucking the air out of the tube so there’s minimal air resistance for capsules riding on rails). It’s a simple system, and inevitably some engineers in the mid-19th century wanted to scale it up to something big enough to carry people.

The most famous of these is probably Alfred Beach, whose 1870 Beach Pneumatic Transit was the first subway line in New York City (and which might be most famous now for its brief cameo in Ghostbusters). A tube-shaped train that could carry 22 people sat flush within a 2.4m-wide tunnel, blown along a 95m test track beneath Broadway. It was a popular tourist attraction at the time, but Beach failed to get investors interested in backing him in extending it into a proper underground railway (and a stock market crash in 1873 didn’t help either).

There was a similar demonstration railway built in 1864 in Crystal Palace for the Great Exhibition, and there were some other experimental pneumatic trains in places like Devon, Dublin and Croydon, but there was never a full run at the idea that lasted very long. Pneumatic tubes are incredibly expensive to maintain when scaled up to the size of normal trains.

Of all the pneumatic railways, though, the LPDR is the oldest – it’s actually the second-oldest underground railroad in the world, opening only a year after the first Paddington-Farringdon line of the Underground – and the longest-lasting of them all. “As a system it was fantastic,” Stray says. “But it was a failure.”

The LPDR was built in two parts. The first, in 1863, was a single tunnel (the same size as the test one at Battersea) running from beneath platform one of Euston station to the Eversholt Street sorting office, a third of a mile away. But the second part, built between 1863 and 1866, was the main project – two tunnels, 2.8km from Eversholt Street to Holborn and 1.5km from Holborn to the main GPO office near St Paul’s.

The reason it takes a long dog-leg detour down Tottenham Court Road is that the Duke of Bedford, who owned most of the land between Euston and Holborn, refused the Pneumatic Despatch Company permission to mine its tunnels underneath. It was a bigger tunnel than before, too – 1.5m wide – running just beneath the road surface.

“It is phenomenal,” says Stray. “They had 21-foot-wide centrifugal fans at first powered by so-called ‘Cornish engines’, but they kept on handling it with bigger and bigger engines. It was some weight being transported in these things. Two of the carriages would be carrying about 12 tonnes, journeying at up to 30mph.” That’s not bad – it was more than twice as fast as the 12mph trains on the Paddington-Farringdon line.

When it opened, the great and the good of London’s political and business class turned out at Holborn station to watch the first bags arriving from Euston – and to have a ride on it themselves.

“People would travel on it, clutching a tallow candle on their chest. It was the Alton Towers of its time. Occasionally as they came near the road surface they could hear the clatter of horse’s hooves on the cobble stones. It would dip down under Holborn, occasionally as it went low there would be a splash of water and a smell of rust, and they could tell where they were. There was a lovely report of a lady who was shot the entire length of the system, ‘who emerged virtually unscathed, crinoline and all’.” Visitors to London, including the son of Napoleon III, gave the LPDR a try.

Yet despite proving a smash hit as a novelty, the LPDR proved rubbish at what it needed to do most of all – transport mail. The stations at each end were in basements, and once you factored in the time it took to lug the heavy sacks up and down staircases at either end there wasn’t any kind of time saving compared to the horse and carriage. This became a bigger problem when times began to slip beyond nine minutes for each leg.

“It slipped down to about 17 to 20 minutes [from] loss of gas, loss of pressure,” Stray explained. “Occasionally there would be complete breakdowns where someone would have to crawl into the tube with a length of rope, tie it around the carriages and draw them out. Also there was an ingress of water, and occasionally wet bags, and the last thing you wanted was damaged mail.”

There was also political opposition to the LPDR from within the GPO, which had been forced into paying for this expensive experiment by Parliament. “They were probably looking for a reason for it not to work – that’s my suspicion,” Stray said. Business dried up. In October 1874, the last train left for the GPO, and it closed for good after soaking up £200,000 in costs – that’s £1.9m in today’s money. “They really only had a decade of use.”

Perhaps the most surprising thing about the LPDR is how quickly it faded from memory. Transport blogger Ian Mansfield found an article from the Windsor Magazine in 1900 detailing the rediscovery of “London’s lost tunnel”, which is amazing for something that was barely a quarter-century old at the time.

By the 1920s, when the Post Office realised it could use its old pneumatic railway tunnels for laying down telephone wire, it had the problem that it had no idea where the tunnels actually were – and, when it got down there, it found that sections had been destroyed by newer construction projects, or used by companies illegally for storing things like lumber. Gas had a tendency to build-up in the city’s sewers at the time, causing pavement explosions, but in 1928 a gas build-up in the old LPDR tunnel near the junction of High Holborn and Kingsway caused one of the most serious of the era (known at the time as “Holborn Explosion”).

“It lifted the ground for hundreds of metres in each direction,” said Stray. “It blew in shop fronts. There were flames that were 30 feet high in the air, that burned for hours on end. Below ground, where a lot of premises had cellar space, the walls were blown in a few inches.” One man was killed, and thousands of pounds of damage was recorded.

All we have left of the LPDR are two of the carriages from the small tunnel between Eversholt Street and Euston – that’s a photo of them at the top of this piece. They were found in 1930 during construction work at Euston, and are currently kept at the British Postal Museum & Archive in Debden. The rest of the tunnels – those not destroyed by more modern construction works – are probably caved in, filled with rubble, or otherwise lost.

Here’s Rammell’s 1958 map of where he thought the LPDR would eventually run: 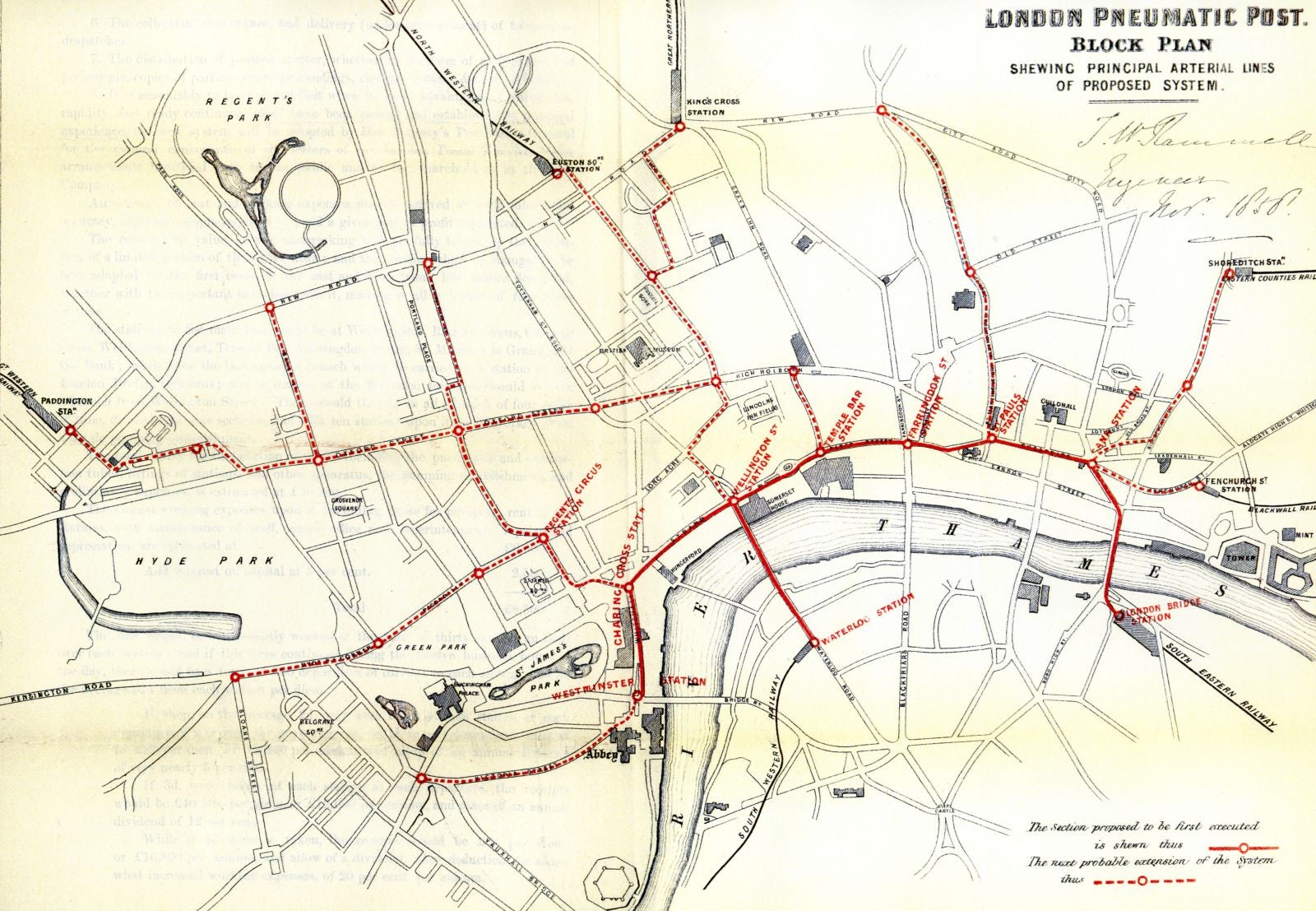 The hope was that key government buildings – like the Houses of Parliament, India House, Custom House, the Tower of London, the Royal Mint, and the Bank of England – would all be linked up. In the end, a traditional railway built in 1927 – the Mail Rail – pulled off much of what Rammell dreamed of, linking Paddington to Whitechapel via several of Royal Mail’s key London offices.

Mail Rail closed in 2003, becoming a thing of legend among the capital’s urban exploration community (and only finally conquered by explorers in 2011). The BPMA is currently trying to raise funds to build a new Mail Rail museum and offer tours of certain closed sections, and from 2019 it hopes to offer rides on a replica train through a kilometre of the tunnels. Unlike the LPDR this piece of London history hopefully shouldn’t be lost to memory.

Yet we should wonder about what might have been had the technology for the LPDR been a little bit more reliable, or its backers willing to lose a little bit more money. “This was ambition,” said Stray. “This was ‘railmania’, a time when the supplements to things like the Times would carry a thousand proposals like this. People lost many millions of pounds. There is little surviving of this, little surviving headed notepaper, there’s no signage or anything like that. But there are the stories.”