After trying, with some success, to bury bad news about Universal Credit under coverage of George Osborne’s Autumn Statement last week, Iain Duncan Smith will find it harder to avoid scrutiny of his failures today. He will appear before the work and pensions select committee at 4:30pm to answers questions about the problems with the programme and Labour is highlighting new OBR figures showing just how few claimants will be on the benefit by the time of the election.

As recently as March 2013, it was forecast that 1.7 million people would be claiming Universal Credit by 2015 but as the table below shows, that figure has now been rounded down to zero. As I reported last week, there were just 2,150 people on the benefit at the end of September, 997,850 claimants short of Duncan Smith’s original April 2014 target of one million. By 2015-16, the OBR expects 400,000 people to be claiming Universal Credit, less than 10% of the original target of 4.5 million. Nearly three million (2.9 million) are forecast to be on the system by 2017 but the OBR warns that “given the delays to date, and the scale of migration required in 2016 and 2017, there is clearly a risk that the eventual profile differs significantly from this new assumption”. It notes that the government’s new migration timetable “has yet to be subjected to full business case approval”.

Universal Credit: from 1.7 million to zero 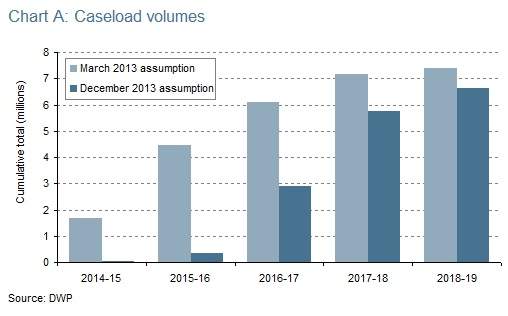 Interviewed on the Today programme this morning, Duncan Smith defended his record on the basis that, unlike in the case of previous government failures over tax credits and the NHS IT system, “no one has been affected”. But this defence relies on him accepting that he has failed to deliver the “welfare revolution” he so confidently promised in 2010 in favour of damage limitation. After regularly boasting that more than a million people would be on the system by 2014, he unconvincingly claimed that he “never wanted to dwell on figures”, before eventually conceding: “I do accept, of course, that this plan is different from the original plan.”

It was in September, in an an excoriating report, that the National Audit Office warned that “throughout the programme the Department has lacked a detailed view of how Universal Credit is meant to work”, that the 2017 national roll-out date was in serious doubt, that the department “has not achieved value for money”, with £34m of IT programmes written off, that the current IT system “lacks the ability to identify potentially fraudulent claims” and that the DWP repeatedly ignored warnings about the viability of the project. Duncan Smith recenty told the work and pensions select committee that he was merely following advice from MPs “not to go too fast” but as Labour chair Anne Begg replied, “There’s rushing it and there’s a snail pace”.

Also appearing on Today, Rachel Reeves described the programme as “a shambles” and declared that “the whole project is now in disarray”. But the shadow work and pensions secretary again affirmed that Labour still believes in “the principle of Universal Credit”, a position that contrasts with that taken by the SNP, which has pledged to scrap the scheme if Scotland votes for independence next year. While Reeves is rightly using Duncan Smith’s failures to gain the political edge over her opponent, the longer they continue, the more urgent the question becomes of just how Labour will get the project back on track if it wins in 2015.