One of the unexpected consequences of Russell Brand’s guest-edit of the New Statesman is that Robert Webb (of Peep Show fame) has rejoined the Labour Party (no, I didn’t know he was a member either).

In an open letter to Brand in tomorrow’s NS (which you can read in full here), he writes:

I read your thing on revolution in these pages with great interest and some concern. My first reaction was to re-join the Labour Party. The Jiffy bag containing the plastic membership card and the Tristram Hunt action figure is, I am assured, in the post. I just wanted to tell you why I did that because I thought you might want to hear from someone who a) really likes your work, b) takes you seriously as a thoughtful person and c) thinks you’re wilfully talking through your arse about something very important.

Webb warns that “when you end a piece about politics with the injunction ‘I will never vote and I don’t think you should either’, then you’re actively telling a lot of people that engagement with our democracy is a bad idea. That just gives politicians the green light to neglect the concerns of young people because they’ve been relieved of the responsibility of courting their vote. 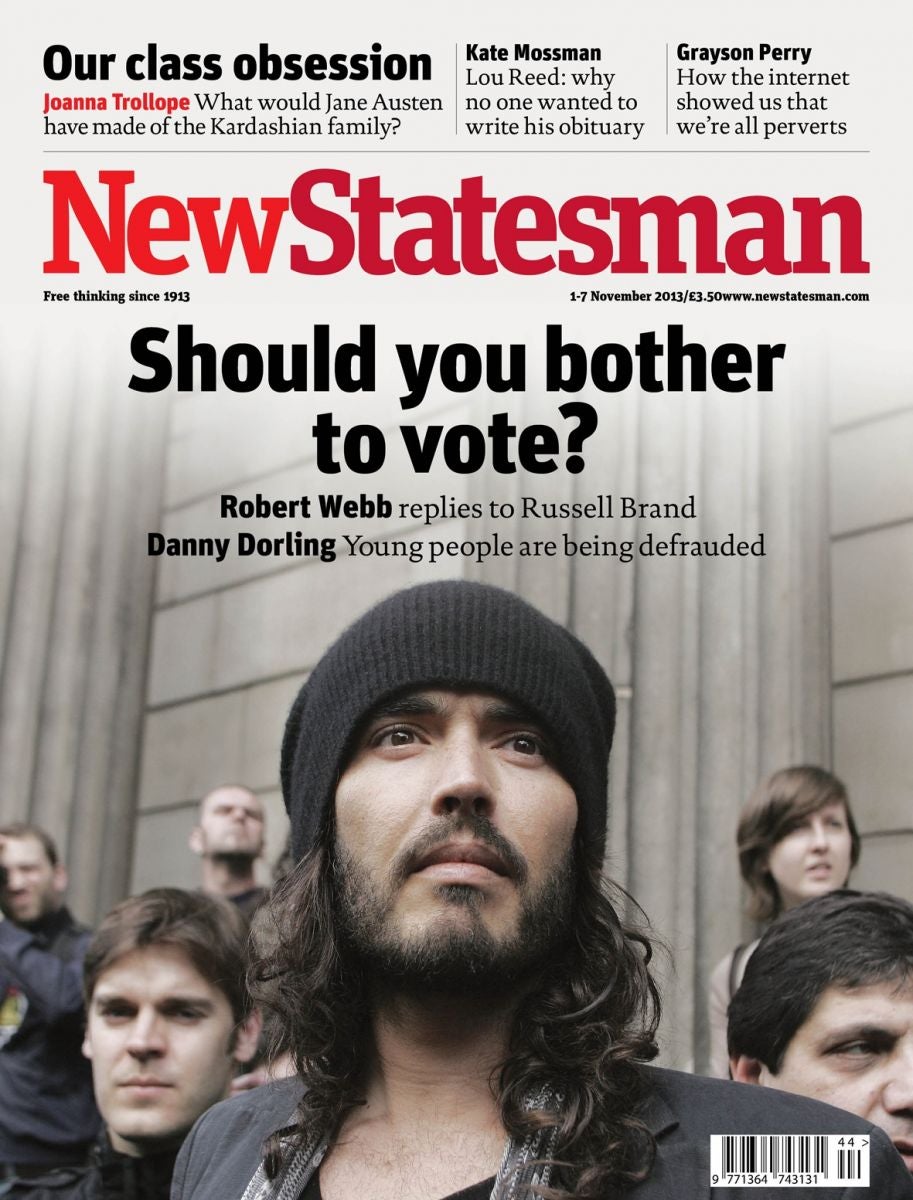 In a spirited defence of the last Labour government’s record, he argues:

The last Labour government didn’t do enough and bitterly disappointed many voters. But, at the risk of losing your attention, on the whole they helped. Opening Sure Start centres, introducing and raising the minimum wage, making museums free, guaranteeing nursery places, blah blah blah: nobody is going to write a folk song about this stuff and I’m aware of the basic absurdity of what I’m trying to achieve here, like getting Liberace to give a shit about the Working Tax Credit, but these policies among many others changed the real lives of millions of real people for the better.

This is exactly what the present coalition is in the business of tearing to pieces. They are not interested in helping unlucky people – they want to scapegoat and punish them. You specifically object to George Osborne’s challenge to the EU’s proposed cap on bankers’ bonuses. Labour simply wouldn’t be doing that right now. They are not all the same. ‘They’re all the same’ is what reactionaries love to hear. It leaves the status quo serenely untroubled, it cedes the floor to the easy answers of Ukip and the Daily Mail. No, if you want to be a nuisance to the people whom you most detest in public life, vote. And vote Labour.

With Eddie Izzard and John O’Farrell already among the party’s celebrity supporters, it looks as if Miliband has the comedians’ vote sewn up.