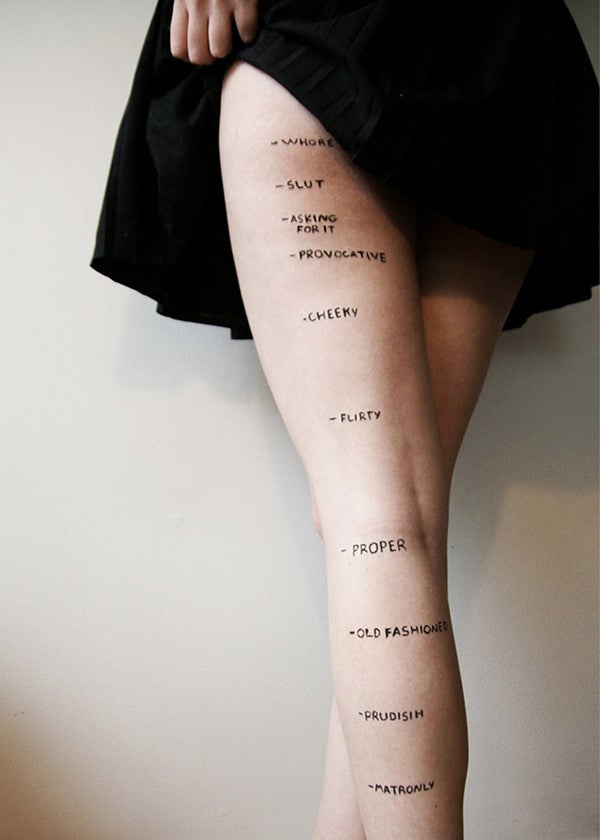 When Canadian artist and graphic design student Rosea Lake released an artwork that criticised society’s view of women, she could have never guessed that it would go transatlantic. Even less likely was that in doing so, it would end up in the hands of a far-right political group in Belgium who would appropriate it, and then spearhead their campaign against ‘Islamification’ with a xenophobic version.

While at university in 2012, Lake shared a piece online that she had created for a design project. It featured a woman’s legs and a skirt, with terms from ‘slut’ and ‘whore’ to ‘prudish’ and ‘matronly’ written at the appropriate measuring points. Almost immediately, the image went viral.

‘We measure women the same way we measure cylinders,’ she told The Huffington Post that year, in an interview that followed up her startling internet success (over 100,000 reblogs in 24 hours), ‘but no one says it because it’s mean.’ Clearly, terms like ‘asking for it’ – another example from the artwork – are meaner than stating the situation outright.

Fast forward a few short months, and Lake is now leading a Facebook campaign in support of ‘artists who have been ripped off everywhere’ following the unauthorised use of her image by Vlaams Belang (Flemish Interest.) The group has a murky history, originating from a party (Vlaams Blok) that was effectively shut down by a court ruling in 2004 declaring it racist. Vlaams Belang is supposedly a less extreme version of its predecessor, which advocates strict limits on immigration and opposes multiculturalism.

Anke Vandermeersch, senator of the Vlaams Belang party and President of related group Women Against Islamification, apparently lent her own legs for a recreation of the image which uses the words ‘steniging’ (stoning) at the top, ‘gematigde Islam’ (moderate Islam) at the ankles, and the self-explanatory ‘Sharia-conform’ underneath the feet.

On the Women Against Islamification website, an article by Anke Vandermeersch states that the group are against ‘the authentication of mosques, the subsidisation of Muslim associations, Quran schools and mosques, the payment of imams, etc.’ She also warns, in the scaremongering tones so beloved of the far right, that ‘[i]f Europe does not strike back, the dire menace of Islamic colonisation will sooner [or] later become true.’ There is more than a trace of irony in the fact that Lake named her original artwork ‘Judgments’ (Vlaams Belang reimagined it as ‘Vrijheid of Islam? [freedom or Islam?]’)

Lake, who intended her original work to promote tolerance and discussion, says that she does not have the means to pursue legal action against Vlaams Belang or Anke Vandermeersch. In her original Tumblr post sharing her work, she wrote: ‘I used to assume that all women who wore Hijabs were being oppressed, slut-shame, and look down on and judge any woman who didn’t express her sexuality in a way that I found appropriate. I’d like to think I’m more open now.’ Sage advice that Vandermeersch and her compatriots would do well to follow themselves.

Meanwhile, Lake hopes to use the same social media tactics which made her artwork so successful in the first place to spread the word about Vlaams Belang’s underhanded tactics. Although financial compensation seems logistically impossible to guarantee, she considers it important from both a political and artistic perspective to raise awareness.

It remains to be seen whether the Vlaams Belang party or the Women Against Islamification project will pay her any attention – one of many debts which they owe her.