The announcement by Nick Clegg that the coalition will introduce free school meals for all five-to-seven-year-olds from next September has given the Lib Dems something to cheer on the final day of their conference. But if they’re to be consistent, at least some should be denouncing him. 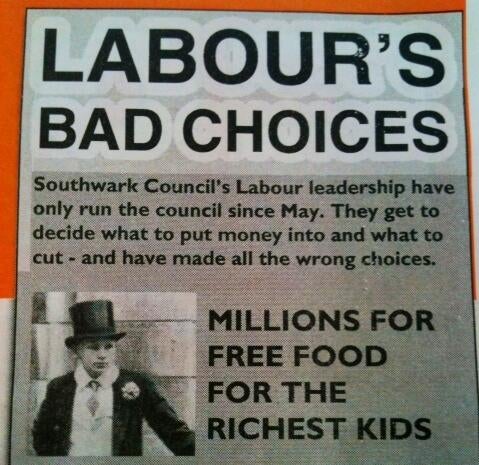 In Southwark (as well as Hull and Islington) the party campaigned against the Labour council’s introduction of free school meals, branding the policy “millions for free food for the richest kids.” In September 2011, councillor Anood Al-Samerai, the leader of the Liberal Democrat group, said: “Labour spending more than £8 million on free school meals for wealthy families simply isn’t the answer. There is no evidence to show that extending free school meals to every child will significantly reduce obesity.

“In fact there is evidence from other places which dropped this expensive scheme that it doesn’t work. And Southwark already has one of the highest uptakes of free school meals in the country, yet one of the highest obesity levels.

“What works is educating parents and children about how to prepare healthy meals at home. Labour in Southwark has cut early years work in the borough which does this. What works is sport and exercise.

“Labour have cut the Southwark community games which do this. What works is active youth services. Labour has cut these. Instead they are wasting millions on a bribe they offered because they were desperate to be elected and they are taking council tax money from poor families to spend on the lunches of richer ones.”

The most notable aspect of Clegg’s policy is the reassertion of universalism after the means-testing of child benefit. He said yesterday that he aspires to introduce free school meals for all primary pupils. In response, just as Southwark Lib Dems attacked Labour, the Institute of Economic Affairs and others have criticised the coalition for subsidising the children of rich families. But this ignores the social benefits of universalism.

Free school meals remove the stigma of means-testing (the main reason why 40% of eligible children don’t claim them) and ensure that every child receives a healthy lunch. In pilot areas, there was a 23% increase in the number of children eating vegetables and an 18% fall in those eating crisps. As a result, students were found to be on average two months ahead of their peers elsewhere, with between 3 and 5% more children reaching target levels in maths and English at Key Stage 1. Academic improvements were greatest among children from the poorest families.

If rumours of the death of universalism appear to have been exaggerated, it is clear that all three of the main parties now believe in prioritising universal services over universal benefits. Influential figures such as IPPR director Nick Pearce and Gavin Kelly, the chief executive of the Resolution Foundation, have recently argued that should be switched from benefits such as the winter fuel allowance and child benefit to services such as social care and childcare.

This is not just because the funds for improved provision cannot be raised through taxation alone, but also because universal services (most obviously the NHS, but also comprehensive education and Sure Start) have generated more enduring public support than cash benefits. It is notable, for instance, that while the government was able to win majority support for the cuts to child benefit, it could never hope to do so in the case of the NHS. Voters feel a greater sense of attachment and loyalty to institutions, rather than cash transfers.