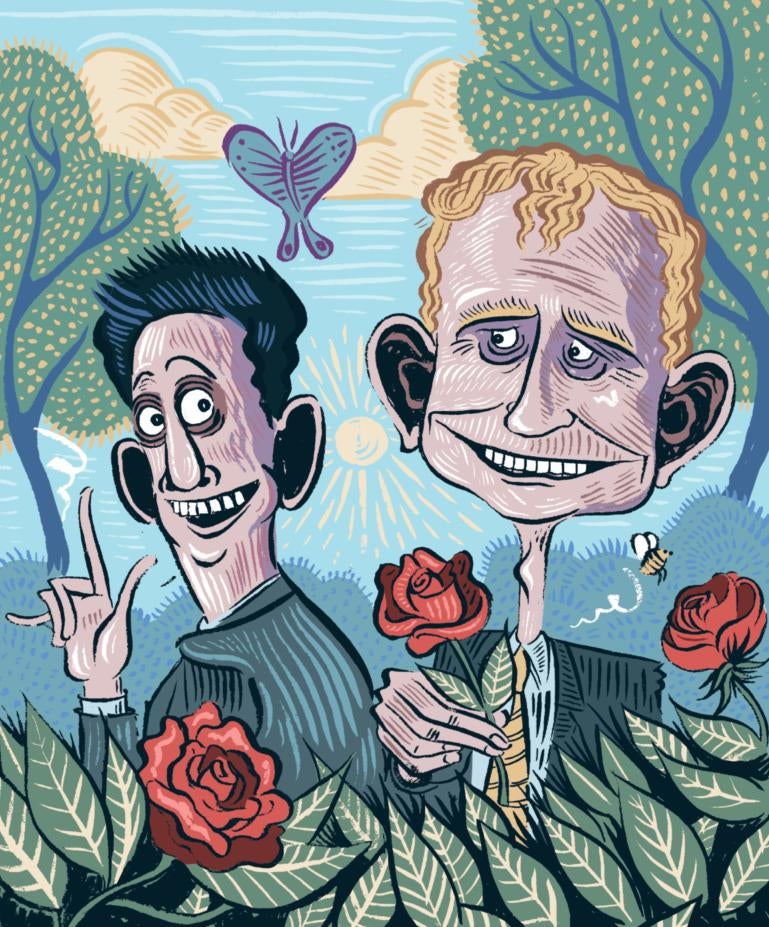 Liberal Democrat president Tim Farron said of Ed Miliband: “I don’t want join in with the Tories who compare him to Kinnock.”
Illustration: Nick Hayes

Nick Clegg and his allies have long regarded Tim Farron, the Liberal Democrats’ popular and ambitious president, with suspicion and they have even more reason to do so after my interview with him in tomorrow’s New Statesman.

Days before the Lib Dem conference opens in Glasgow, Farron lavishes praises on Ed Miliband in a clear signal that he has his eyes on a Labour-Lib Dem coalition after 2015. While critical of Miliband’s conduct over Syria (“He changed his mind half a dozen times in 48 hours”), he qualified his remarks by telling me:

I really like Ed Miliband, so I don’t want to diss him. I don’t want join in with the Tories who compare him to Kinnock.

He went on to praise Miliband as a model progressive:

First of all, he’s a polite and nice person. I think he is somebody who is genuinely of the Robin Cook wing of the Labour Party, from their perspective what you’d call the ‘soft left’. Somebody who is not a Luddite on environmental issues, somebody who’s open minded about modernising our democracy, somebody who’s instinctively a bit more pluralistic than most Labour leaders and a bit more internationalist as well.

I waited for a “but”, only for Farron to say:

And they’re other things too. For all that I think he could have done a lot more on the AV campaign, he did at least have the backbone to come out and back it.

He wouldn’t share a platform with Nick [Clegg], so he ended up with me, poor thing. I like the guy.

As Farron knows, should Miliband refuse to form a coalition with Clegg in 2015, he could well end up with him again. In a way that the Deputy PM never could, the Lib Dems president regards Miliband as an ideological co-spirit. While Clegg seeks to remake the party as an economically liberal outfit, instinctively closer to the Tories than Labour, Farron holds out the alternative of an unambiguously centre-left party, at one with Miliband on issues such as the 50p tax and tuition fees.

Farron’s comments set him at odds with Clegg allies such as Home Office minister Jeremy Browne (interviewed by Rafael this week), who described Labour as “intellectually lazy, running on empty” and suffering “from a leadership void”. Rather than making eyes at Miliband, he praised David Cameron for identifying “the big issue of our time” in the form of “the global race”.

By contrast, when Farron does mention a Conservative minister (Michael Gove) it is to bury, rather than praise him. He told me that the Education Secretary was “completely wrong if he thought that the way to deal with the age-old problem of the fact that Britain doesn’t always compete as well when it comes to educational outcomes as our European neighbours is to just berate the teaching profession, the chances are that it’s British political culture and class culture that are the reason why we’re behind other European countries and always have been.”

50p tax rate: “we should have that in our manifesto”

Elsewhere, in another point of agreement with Miliband, Farron calls for the Lib Dems to pledge to restore the 50p tax rate. While David Laws has warned against tax policies that raise little revenue and are “just symbols”, a view shared by Clegg, Farron turned this logic on its head.

“My personal view is that we should have that in our manifesto and while it raises an amount of money, it’s also a really important statement that we are all in it together.”

In the case of tuition fees, he similarly argued that the party should not settle for the status quo. “I would personally like to see fees abolished and replaced with a graduate contribution system purely based on ability to pay.” The manifesto, he said, should call for “movement towards a more progressive system.”

While avoiding mentioning Clegg by name, he told me:

The fear among activists is that the party will produce a bland, centrist manifesto seemingly crafted with a second Conservative-Lib Dem coalition in mind. It was a concern echoed by Farron. “The most important thing from our perspective, and I’m a member of the manifesto group, is that we ensure that our manifesto is 100 per cent Liberal Democrat. You don’t pre-concede on things. So if we think the Tories wouldn’t accept putting the top rate of tax back up to 50p, but we want to, then we stick it in there and we negotiate from that point.”

Syria: I would have voted against military action

Farron abstained on the government motion on Syria but told me that he would have opposed military action had there been a second vote.

“I made it very clear that if it was a call to intervene militarily, I would have voted against. If the vote had been won, and we’d been back here voting on action this week, I’d have been in the no lobby.”

On Clegg’s attitude to left-wing voters: “you don’t write people off”

As party president and the standard bearer of the Lib Dem left, Farron has made it his mission to win back the millions of progressive-minded voters who have deserted the party since the last election. But while he would never describe any voter as lost, Clegg often appears to regard his party’s former supporters with something close to contempt. He remarked last year: “Frankly, there are a group of people who don’t like any government in power and are always going to shout betrayal. We have lost them and they are not going to come back by 2015. Our job is not to look mournfully in the rear view mirror and hope that somehow we will claw them back. Some of them basically seem to regard Liberal Democrats in coalition as a mortal sin.”

When I asked Farron whether he agreed, he bluntly replied: “the people who are most likely to vote for you next time are the people who voted for you last time…You don’t write people off, they’re there to be persuaded to come back, or rather stay with us.”

Housing: we should build “vast numbers” of council houses

While the coalition’s Help To Buy scheme is inflating housing demand, Farron will use his speech to the Liberal Democrat conference on Saturday to address the fundamental problem of supply.

He told me that the party should commit to building “vast numbers” of council houses, a minimum of “half a million”, and that local authorities should also be allowed to develop “a new strand of income”.

Farron explained: “that means not just building council houses but building more expensive houses as a way of developing income streams. Local authorities do incredibly good work in supporting people but not if they’ve got no money, they’ve got a reduced council tax base and reduced funding from central government. Being a councillor is a miserable experience these days as you’re having to cut, cut, cut just to stand still. Well, here’s a way of providing a genuine source of income, with councillors as developers, as investors in their own communities.”

Tim Farron is speaking at a New Statesman fringe event ‘Endgames: the Lib Dems in the final phase of coalition’ in partnership with the Institute of Government on Monday 16th September at 6pm at the Liberal Democrat conference in Glasgow. He is also doing an ‘in conversation’ event in partnership with Santander on Tuesday 17th September at 6:15pm.