What’s so special about Germany, anyway? Throughout the euro crisis, Merkel and her colleagues have been at pains to remind the rest of the world that Germany is a eurozone country like any other. It is subject to the same rules as the rest of Europe and faces many of the same challenges. Germans are neither comfortable with being Europe’s hegemon (a “foreign concept”, according to Merkel), nor do they have the means to fulfil that role. Germany is, as the Chancellor recently stated, “not the richest country”, and they do not think the ‘periphery’ is so poor as to be incapable of self-help. Through German eyes, their relative economic position today results from shrewd choices they made before the crisis. The ‘periphery’ must now follow suit.

However, despite Merkel’s protestations, German public opinion shows acute awareness of its position as Europe’s exceptional nation. Germans are well aware of their superior economic position vis-a-vis the rest of the continent. According to the Eurobarometer, the EU’s largely ignored survey of its citizens, 77% think the national economy is doing well versus 26% who think the same of the European economy. Furthermore, as the chart below shows, while Germany may be subject to European rules, there is widespread acknowledgement that they are setting them, or at least driving the policy debate.

The Eurobarometer vividly illustrates the extent to which Germany has deviated from the rest of the eurozone since the crisis began (only Austrians and Finns join Germans in viewing their national economy positively). The survey also shows the degree to which the policy-response to the crisis has been asymmetric. When asked which issues were of most importance to their country, Germans named debt, closely followed by inflation. Conversely, citizens from France and the ‘peripheral’ countries worry about jobs significantly more than deficits. Eurozone policy has focused almost exclusively on the needs of Germany and the other creditor nations. The chart below, which shows citizens in the ‘periphery’ feeling largely ignored, reflects this fact, and perceptions of their national economies could barely be worse. French opinion seems to be going the same way. The divergence hints at greater political tension in the euro area – unless policy can be diverted onto a more conciliatory path. 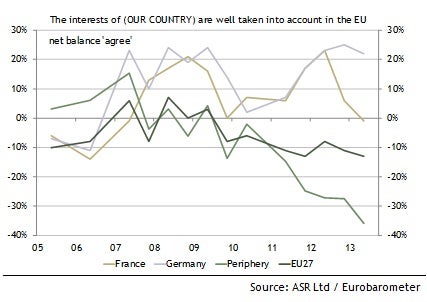 So what do the Germans want to do with their new-found dominance? Despite being the only country with political capital to spare, the results of the Eurobarometer suggest the political imperative in Germany points worryingly to the status quo. Germans are ultimately satisfied with their economic situation and position of power within the eurozone. Equally, they show little desire to proactively seek a resolution: when asked about eurobonds, Germans are far and away the biggest opponents in the single currency – whereas most of their neighbours support the idea.

In a recent speech, Niall Ferguson argued that Germany is increasingly conforming to the image of its 19th century national personification, ‘Deutsche Michel’. Michel, “the victim of unscrupulous neighbours, who picked his pockets and stole the shirt off his back”, caricatured Germans’ perception of themselves as an exceptional nation in a continent of poorer, scrounging neighbours. The results of the Eurobarometer graphically illustrate these very fears. The question is whether, following September’s election, Angela Merkel will be willing to reach deeper into Michel’s pockets.