It looks the Tory poll bounce that followed David Cameron’s EU referendum pledge was of the “dead cat” variety. The weekend polls showed Labour’s lead had fallen to just six as the Conservatives’ vote share rose to 35 per cent but by the middle of the week it was back at nine. Today’s YouGov poll has the Labour lead at 12, back at the level seen before Cameron’s speech.

This will come as a surprise to some, but it shouldn’t. As I noted on the day of Cameron’s speech, while voters share the Tories’ euroscepticism, they do not share their obsession with the subject. Polling by Ipsos MORI (see below) shows that just six per cent of voters regard the EU as one of the most “important issues” facing Britain. As Lord Ashcroft writes in a typically astute analysis on ConservativeHome, Cameron’s pledge has “made Tories feel better about being Tories” but it has not “changed anybody’s mind”.

How important is the EU to voters? Not very 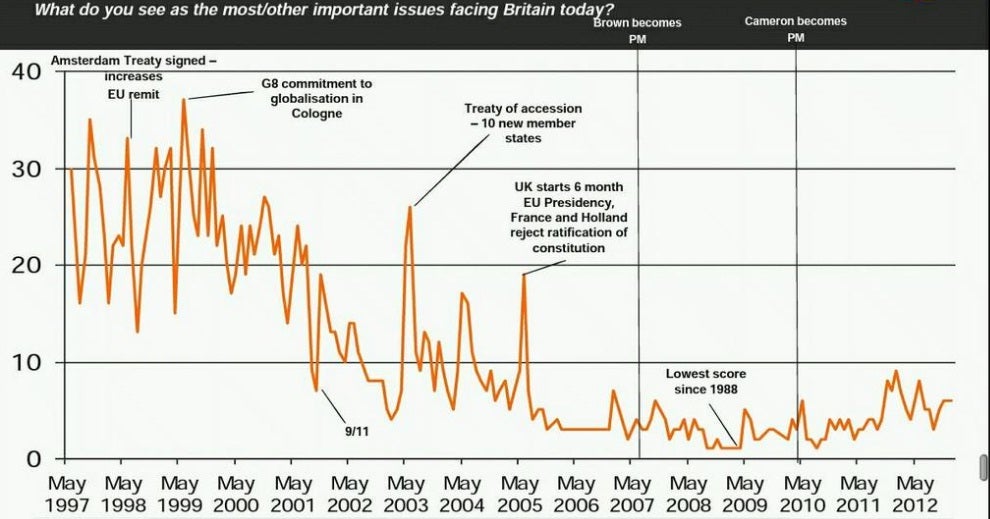 This isn’t to say that Cameron was wrong to make his pledge. It has undoubtedly won some votes back from Ukip and shored up eurosceptic Conservative support. Rather, it is to say that Tory MPs need to remember that the outcome of the next election will be determined by growth, jobs and public services – the issues that matter to most voters. So long as growth remains non-existent and wages remain below inflation, the Tories will struggle to advance.

With Labour back in front, Ed Miliband is in a stronger position to argue that his decision not to match Cameron’s referendum pledge was the right one. While the Tories bang on about Europe, he wants to bang on about growth. Morever, as Raf noted in a prescient post, Miliband doesn’t want the early years of a Labour government to be dominated by an EU referendum.