Anita Sarkeesian, the videogame critic who attracted an online hate campaign – and a game about beating her up – after she launched a Kickstarter project (I like writing it like that, to emphasise the madness of it) spoke at a TEDx event organised by the Paley Center for Media.

You can watch the video here; it’s around 10 minutes long:

I’ve taken screenshots of two of her points. The first is some of the harassment, because I think people need to know that when we talk about “trolling” or online abuse, we’re often not just talking about a few tasteless comments. Special shoutout to James Anderson, who used his Facebook profile to LOL: “Wouldn’t it be funny if five guys raped her right now :D”. 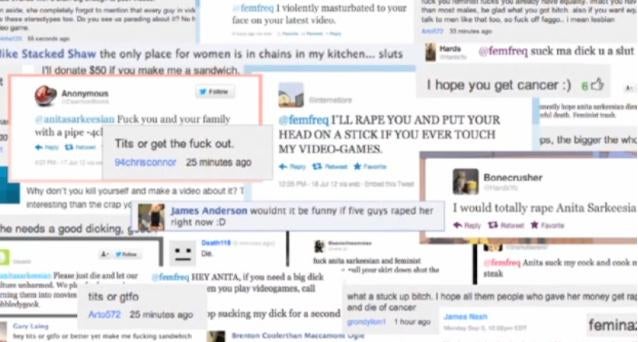 The second is what happened to her online presence. You can see the vandalisation of her Wikipedia page, the attacks on her website, the attempts to access her Twitter, Google and Formspring accounts and the attempt to have her social media profiles flagged as spam. In the top right is someone claiming to be from 4Chan offering up her phone, email and address, adding “this is going to be fun!” 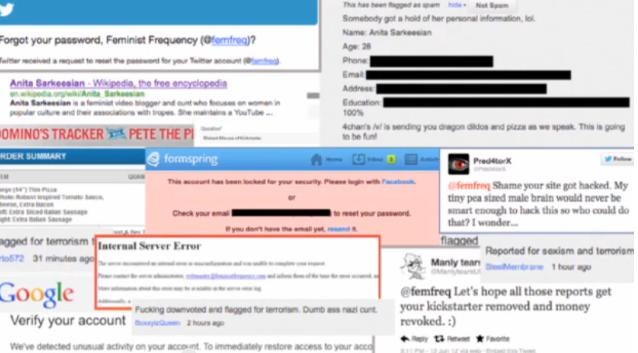 But the most interesting aspect of her talk is the way that she interprets the harassment itself as a game. There is an enemy – her – who must be defeated – by getting her to stop making feminist videos. There are forums dedicated to the cause, where members slap each other on the back for each latest bit of bullying. And there are rewards – in the form of peer approval – for being the worst, most daring member of the group.

As Sarkeesian put it: “This social aspect is a powerful motivating factor which provides incentives for players to participate and to escalate the attacks by earning the praise and approval of their peers. . . Players earn ‘internet points’ for increasingly brazen attacks. “

That echoes what I was told recently by Tom Postmes, a researcher studying “trolling” and online culture at the University of Groningen. He emphasised that although anonymity is often blamed for bad behaviour online, it’s not as simple as that. He told me:

It is clear that there is a social dynamic amongst trollers. They like to show off their work. For example, if anonymity for them was vitally important they would not use a pseudonym consistently through time and have multiple identities. It’s very hard to know but research suggests that people with particular kinds of online identities tend to stick to them for very long times. These people, they bask in the effects of their online contributions.

They take some pride in their work and they obviously also think it’s quite funny to do these kinds of things. There’s some kind of pride they derive from it within their community. It’s a very loose community of course, it’s not a clearly defined group. They do not hang out in one place. Nevertheless, they do comment on each others’ work, they look out for it. They clearly identify with some kind of common style of interacting online.

In Sarkeesian’s case, her abusers have effectively “gamified” trolling. It’s like when a group of kids gather, and they talk about doing something stupid, and no one is really sure whether or not to do it, and then the most extreme member of the group does. (And then everybody looks up to them, and realises that even if they think it was a stupid thing to do, there are no points to be earned for being a square.) Except because of the connectivity of the internet, the size of the group is vastly larger, and so the extremity of behaviour is further from the centre. Terry Pratchett put the idea beautifully: “The IQ of a mob is the IQ of its dumbest member divided by the number of mobsters.”

As Sarkeesian notes, to her abusers “it’s a game”; to the victim, it’s anything but.

The first time I wrote about Sarkeesian, I noted that there were two outcomes to her Kickstarter launch: one horrific, the other wonderful. (She got abused; she got funded.) It’s the same again now: in the video, she says that she had hoped to make five “Tropes vs Women” videos; thanks to the extra funding, she is making 13, plus a classroom curriculum that educators can use for free.

And the horrific bit? Look under that YouTube video:

WHY ARE COMMENTS TURNED OFF? This talk comes from a woman who was targeted by an online hate campaign. Predictably, the same campaign has targeted this talk, so comments have been shut down. If you’d like to comment constructively on this video, please share on your own social networks.