So Sally Bercow appears to have quit the Twitters for good. She already was on thin ice following the legal threats from Lord McAlpine, who was understandably miffed that she named him on Twitter during speculation following a Newsnight report; but she plummeted straight through it when she was accused of breaching a section 39 order, under the Children and Young Persons Act 1933, for naming a schoolgirl who allegedly ran away with her teacher.

A parenthetical, here: a lot of people, on Twitter and elsewhere, are angry that Bercow is in trouble for this, because they rightly point out that the girl had previously been named.

Section 39 orders are used to protect the identity of children who appear, or are likely to appear, in court as witnesses, victims or suspects. They are discretionary, and so can be placed by the courts when they think appropriate. Typically, this is as soon as a court case looks on the cards, which is why the vast majority of children involved in such cases are never named. Occasionally, however, it is in the child’s interest to allow their name to be publicised; maybe to encourage witnesses to come forward, to appeal to the public for help, or to track down a missing person. When that need has passed, the section 39 order can be placed as normal.

But what is important is that this is done in the child’s interest. Being a witness, victim, or suspect as a young person can be traumatising, and the system is set up to allow those people to not have their name forever linked with a bad period in their early lives. Yes, it is hard to make the internet forget anything, and the Streisand effect is probably, unfortunately, going to be invoked by people. But this isn’t the state crushing free speech to protect the interests of the rich and powerful; it is the state attempting to protect a vulnerable child. So please, don’t start spreading that child’s identity around as a knee-jerk response to Bercow’s troubles.

Why have the BBC and Labour Party learned Tuftonspeak?

Parenthetical over. The problem raised by Bercow’s reported breaching of the order is that, as mentioned, section 39 orders are discretionary. While, as a lay person with a good knowledge of media law, it’s possible to guess that whether such an order has been placed by looking at whether a child’s name suddenly disappears from the press, the only way to know for sure is to be a journalist at a newspaper which gets sent the orders.

This is, frankly, a system which isn’t fit for purpose in an age when nearly everyone in the country regularly uses tools which are capable of breaching those orders. The same is true of other media blackouts, like injunctions: the press is told of them, but they apply to the public as well. It has rightly never been a defence that one didn’t know the law they were breaking – but when it isn’t even possible to know the law you are breaking, you can perhaps feel slightly annoyed if you then accidentally get in trouble.

It’s hard to know what would be better, of course. Publishing a list of the identities which can’t be published is clearly counterproductive; yet we don’t want to abandon the system altogether. It may be that the best option really is that mooted by Keir Starmer: an agreement that twitterers with few followers won’t be prosecuted. That still leaves those who have ended up with thousands of followers facing the full wrath of the law – or, like Bercow, quitting until they take a course in media law – but it would at least minimise harm done to the vast majority of people using social networks.

In one final twist to the tale, just before Bercow’s account was deleted, she appears to have been hacked. This tweet was posted late last night: 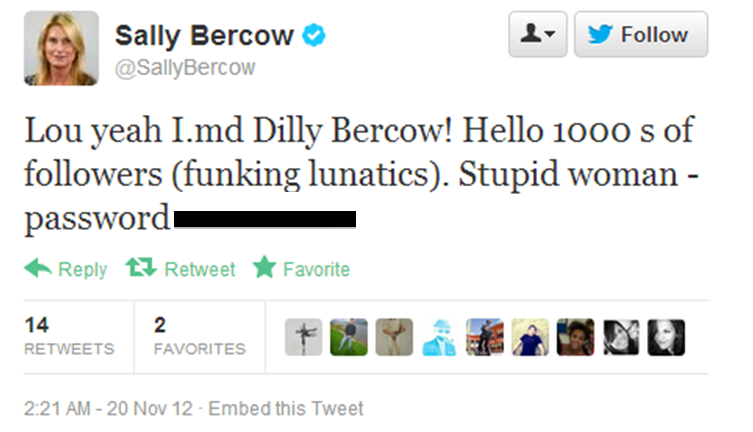 So it may not be the case that Bercow herself even deleted her account. We’ll see.

As this piece involves multiple ongoing and potential court cases, comments are disabled.