Today’s Mail has gone all guns blazing against the Leveson inquiry, unveiling a “quasi-masonic” conspiracy of interconnected individuals (what others might call “the media”) hell-bent on muzzling the free press. Over a dozen pages, it outlines a shadowy nexus around David Bell, who is one of the Leveson inquiry’s assessors, his friend Julia Middleton, the Media Standards Trust and a group called Common Purpose.

Here are 11 of the most surprising pieces of evidence brought to support the Mail‘s case.

Lib Dem donor and one-time SDP activist Bell is a former chairman of the Financial Times, at the time Fleet Street’s most zealous supporter of the European Union. Bell is also a former director of the FT‘s parent company Pearson, which was a financial backer of New Labour.

2. Many journalists have worked at more than one media organisation in the course of their careers

Ian Hargreaves is a former Ofcom board member and one of the best-connected figures in the liberal Establishment. A founder with Julia Middleton of the New Labour think-tank Demos, Hargreaves was deputy editor at Sir David Bell’s Financial Times (Robert Peston was political editor), editor of the Independent and New Statesman, Director of News and Current Affairs at the BBC and is now Professor of Digital Economy at Cardiff University. On the Media Standards Trust website he is listed as a ‘supporter’ of the Hacked Off campaign.

3. These are some pretty scary people we’re talking about:

Mother-of-five Middleton is the founder, chief executive and presiding guru of Common Purpose. She has been described as ‘messianic’ in her crusade to improve standards in corporate and public life.

4. The Guardian‘s Milly Dowler hacking splash was all untrue, except the bit we haven’t mentioned that wasn’t

In July 2011, a nuclear bomb was dropped on Britain’s newspaper industry: The Guardian alleged that the News of the World had deleted messages from murder victim Milly Dowler’s mobile phone, giving her parents ‘false hope’ that she was still alive. Despite the fact that we now know The Guardian story — which followed others detailing the hacking of messages left on celebrities’ phones — was almost certainly untrue, this was the tipping point. [source]

There is some sleight of hand here. In fact, the Guardian‘s splash that day led on the allegation that the News of the World had hacked the phone of murder victim Milly Dowler. The idea of deletions was mentioned in the sub-headline. It is now believed by the police that it is impossible to tell what, or who, caused the deletions. Nonetheless, it is not disputed that the paper hacked the phone of a dead girl in the hope of getting a story.

But while some of the Leveson assessors have patchy attendance records at the Inquiry, Sir David — whose unbridled eagerness to join the judge in his private rooms when the sittings rise has been remarked upon by observers — seems to have barely missed a day of the public hearings that began almost a year ago.

7. The FT has unisex executive loos

Writing in the New Statesman (bugger, are we part of this semi-masonic conspiracy? Do we need to buy robes?), Robert Peston of the BBC describes a “soiree” held by Middleton:

“Almost all her meetings end up with a collective wail about the irresponsibility and excessive power of the media. . . .Meanwhile, the discovery of the evening for me was that Pearson’s executive washroom is unisex, a la Ally McBeal. What is Marjorie Scardino, Pearson’s personable chief executive, thinking of?”

The Mail‘s feature writer, Richard Pendlebury, segues this into:

Peston was unnervingly prescient about one thing. Something has come of that soiree seven years ago.

8. From Chris Bryant’s underpants to Jean Charles de Menezes in one easy step

Another Common Purpose luminary is Chris Bryant MP — exposed by the press for posing in his underpants on internet dating sites. Bryant, who has led the charge against Rupert Murdoch in the Commons and was a Leveson witness, was Common Purpose’s London manager for two years.

Among the senior police officers who are also Common Purpose graduates is Cressida Dick, who was savaged by the press for her leading role in the 2005 shooting of the innocent Brazilian Jean Charles de Menezes in a London Underground carriage.

For a number of years Common Purpose has attracted the obsessive attention of the more outré internet conspiracy theorists such as David Icke, as well as bloggers on the far Right. This has provided a convenient smokescreen against a more rational investigation.

10. That Hugh Grant’s pretty shifty, eh? I mean, look at his face 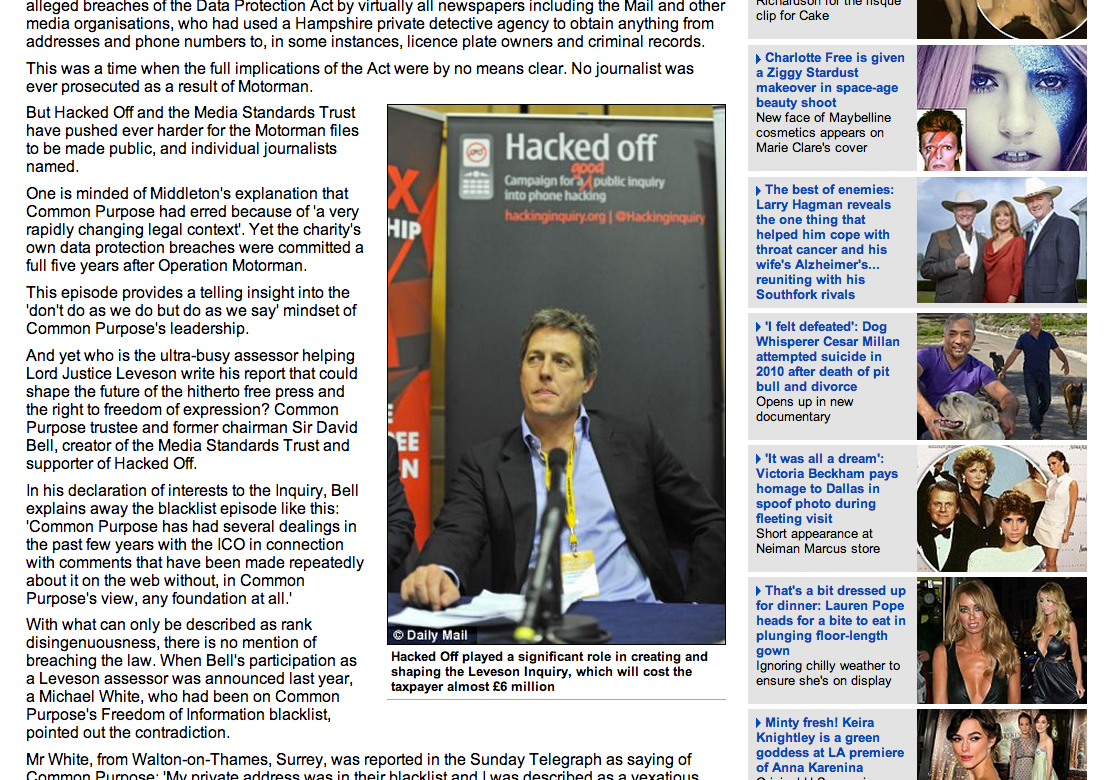 11. I Knew Lesbians Would Be Involved Somehow

The panel included three New Labour peers, including Baroness Helena Kennedy QC — one of Middleton’s top ten ‘inspirational leaders’ and an MST trustee (now acting Chair) — and Dame Suzi Leather, the ‘Quango Queen’ who took flak from the press for championing IVF treatment for lesbians and who was interviewed by Julia Middleton for a film which appeared on the Common Purpose website.

PS. Ssh! No one mention our shadowy nexus

Tragically, there was no space to mention that the Daily Mail is edited by Paul Dacre, who is chairman of the Code of Practice committee, which governs the workings of the current press regulator, the PCC.

Dacre once sat on a subway train near Sid Vicious, incidentally. Does that make him responsible for punk music? 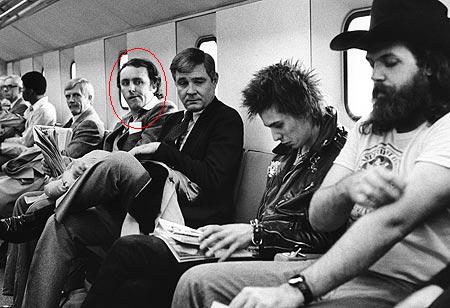