The House of Lords is a medieval relic from a time when land ownership was a major source of political power, and just as ownership of land moved from generation to generation so did the titles. As the House of Commons became the prime chamber the powers of the Lords were eroded and life peerages broke the historical link with land ownership.

This body we are commonly told must be replaced by one which is part elected and part-appointed; but it would inevitably acquire – through election – an authority that could be used to challenge the primacy of the Commons.

There is a case for a national advisory committee to look at legislation and make recommendations to the Commons, which would be the deciding body. This committee should be a representative gathering of people from different parts of our society, which would not be called Lords or enjoy any of the finery associated with that chamber.

How such an advisory body could be established would require further thought, to be sure that it would be genuinely representative of experience and interests and would have a contribution to make to legislation through its advice.

The Conservatives are destroying themselves – and the British economy

The first stirrings of rebellion against Liz Truss

To do this would be to abolish the House of Lords altogether and start afresh in a way that was useful and constructive. The Labour Party should be working on this idea and should reject completely the proposals the coalition government has brought forward.

This piece originally appeared in the New Statesman supplement “Reforming the House of Lords”, free with this week’s magazine. 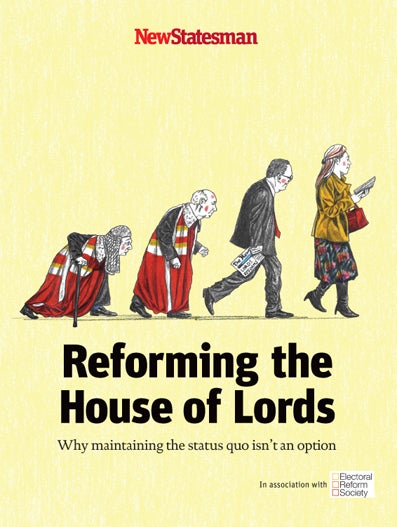