I am grateful to expert Louise Mensch, who once had a Greek Salad from Waitrose, for analysing the result of yesterday’s election so that I can grasp it. She said: “When push comes to shove, the Greek people voted for austerity and sanity. Are you listening, Labour?” Obviously I cannot compete with this sort of laser-like analysis, which would reduce Shakespeare’s Othello to “interracial marriages just don’t work”. But try, I must.

It is difficult to give you a sense of the tectonic plate shift which has taken place in the Greek political geology in the last few years. If you can imagine, between now and 2015, the Tories dropping thirty-two percentage points, the LibDems disappearing into seventh place with less than 5 per cent, the BNP securing 18 MPs, the Greens emerging from nowhere to become the main opposition and the prospect of a Tory/Labour coalition, you may get a taste.

Let us put aside the facile notion that a fragmented election result is “not decisive”. It is, in many ways, a healthier expression of democracy than what has happened in Greece for the last 50 years – a polarised sharing of 80 per cent of the vote between two major parties who swap power every few years. It is as valid a decision as any other. In the case of Sunday’s election, it says loudly and clearly “we trust none of you unfettered or unsupervised”. Given the history of corruption and mismanagement which has brought my country to its knees, it seems to me a perfectly sensible position.

The nominal victors are the New Democracy right-of-centre party. With 29.6 per cent of the vote, 2.7 per cent ahead of radical left SYRIZA, they have secured the much coveted “bonus” which, under Greek electoral rules, gives the top party an additional 50 MPs. This leaves them in the unenviable position of having to form a coalition and drive forward with the austerity package. To add to their woes, the most likely coalition partner (both in numerical terms and being pro-austerity) is the left-of-centre PASOK; their sworn enemies for a generation. PASOK, who were in power three years ago with 44 per cent, now languish on a paltry 12.5 per cent of the vote. Their fall from grace is truly astounding. The Communist KKE party has been obliterated into seventh place with less than 5 per cent. Other assorted new, coalition or independent parties have largely lost out too, as the vote became concentrated around New Democracy and SYRIZA.

SYRIZA is the real winner. I notice that both the BBC and Sky News yesterday took to describing them as left-of-centre or leftist. They are about as left-of-centre as Norwich is west-of-Japan. They are a radical left party and anti-austerity – a term which is not, as the Guardian seems to consider, interchangeable with anti-euro. They took shape in the debates of the Syntagma Square demonstrations, with little party funding or organisation, to secure 17 per cent in the May election and have increased that to 27 per cent a month later.

SYRIZA have already declared that they are not willing to play ball in a New Democracy led pro-bailout coalition. This leaves them in a uniquely strong position. Untainted by the corruption and dirty dealing of the past, their hands clean from the misery which will be visited on the electorate over the coming months, they can sit back, maintain their ideological position intact and watch their mandate grow in the opinion polls. Many commentators are now confidently predicting that their leader Alexis Tsipras (who British news outlets have taken to describing as “charismatic”, presumably because it would be unprofessional to say he’s “hot”) will be Prime Minister in Greece within a couple of years.

And SYRIZA have won in another very important way. They have shifted the whole debate on the bail-out package. So terrifying to Troika and their representatives was the prospect of having someone in charge who might put people above markets, that all the pro-bailout parties have had to water down their position during this campaign. Everyone is now talking about, at the very least, a relaxing of the conditions, a renegotiation of aspects of the package and an emphasis on growth.

Even the Euro-cacophony, which has been hollering that any attempt at deviation from the agreement would see Greece sent to the drachma naughty step, is making softer noises. German Foreign Minister Guido Westerwelle said “I can imagine we could do something in terms of the time frame”. The Commission and the IMF too, have been talking about helping Greece, using words like “partners” and “family”. Are these the same people who told Greece last year to “sell some of its islands” in order to repay its debts?

There was another winner too. The far-right party Chrissi Avgi (Golden Dawn) cemented its position with 7 per cent of the vote and will get 18 MPs. These are not cuddly BNP types. They are a neo-Nazi party with a history of violence which makes Nick Griffin look like Julie Andrews. Their supporters call the leader of the party “Führer” and greet him with the Nazi salute. Their logo is a swastika, thinly disguised as an ancient Greek meander. The country is littered with their graffiti calling for “another holocaust – to clean the place out”. 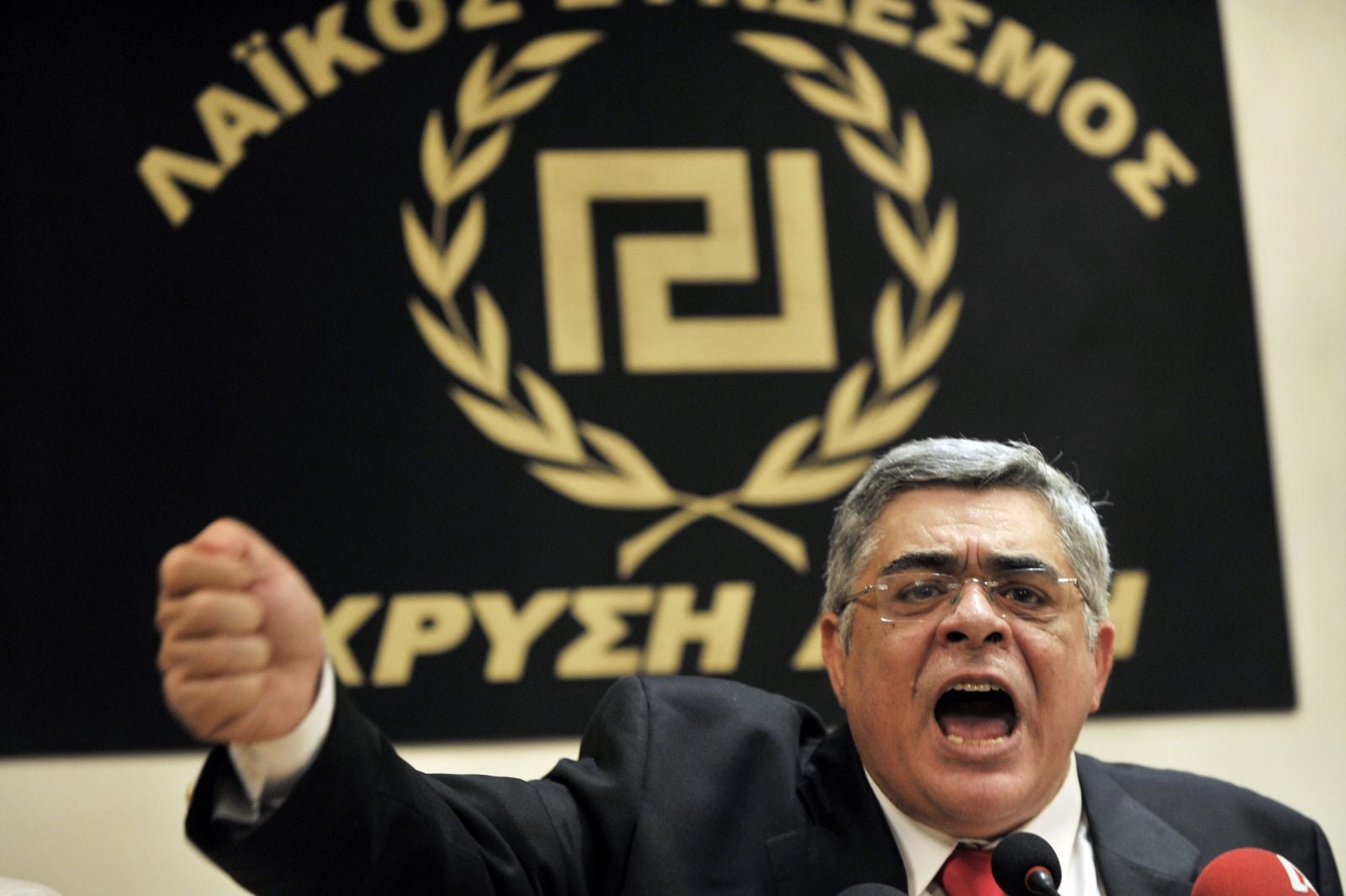 Many had said that the votes they got in the May election were protest votes; votes cast in anger. Many had hoped that their poster boy, Ilias Kasidiaris, viciously beating up a 60-year-old female rival MP live on television, would put voters off. Not a bit of it. Instead Kasidiaris has been elected to Parliament and will sit across from the very woman he assaulted. As one sharp blogger put it, “violence is porn for fascists”. And if the woman you’re punching happens to have very loud opinions, happens to be a lesbian, happens to be a communist, happens to be all three, well that’s the “money shot”.

Golden Dawn did not just appear out of nowhere. They have been around for a long time waiting for their opportunity. When I left Greece, many years ago, they would be the subject of whispered gossip at the grocer’s: “Did you hear? So-and-so’s son is a Chrissavgitis.” It was tantamount to having a criminal in the family; a source of shame. Yesterday, the results from my home-town of Mykonos show that among the four thousand or so voters, 267 people voted for a Nazi party. I probably know some of them. A couple might be my distant cousins. What the hell happened?

Fear and anger happened. And the responsibility must rest squarely with the centre-right parties. Because their reaction to difficult times, their reaction to fear and anger, is to reach for insidious, populist right-wing strategies. More fear. More anger. Attack the immigrant. Blame the unemployed. Demonise the disabled. Wave the flag and clutch at nationalism disguised as patriotism. It’s like an involuntary, political nervous tic. “The mind of the bigot is like the pupil of the eye”, said O.W. Holmes, “the more light you pour upon it the more it will contract.”

And this is the lesson which I hope the UK reader will take away and ponder. When the leader of New Democracy, Samaras, chooses to say that the reason kindergarten schools are struggling to cope is because of all the foreign kids, he paves the way for Golden Dawn to goose-step their way into Parliament. When Sarkozy courts Marine Le Pen’s voters, when Merkel says multi-culturalism is dead, when Cameron links race and religion to terrorism, they open the Overton window for the far-right burglars waiting outside. They make what was previously impossible, possible.

On to more important matters now. The deities of football have set up a highly ironic Euro 2012 quarter-final between Greece and Germany on Friday. We should suggest a little bet to Merkel – “Double or Quits. What do you say, Ange?” If by half-time Greece is not performing to Merkel’s expectations, she may well get rid of our manager and appoint a technocrat of her choice. Perhaps Greece will have a government by then. If they don’t do as they’re told, she may do the same. It wouldn’t be the first time.