In a second archive edition of the audio long read, we bring you two classic magazine articles. In the first, the then editor of the New Statesman, Kingsley Martin, visits Leon Trotsky in Mexico in 1937, where the Russian communist revolutionary was the guest of the artists Diego Rivera and Frida Kahlo (here referred to only as “Rivera’s wife”, though she was also Trotsky’s lover, or about to be). Martin wanted to ask the exile about the show trials then being held in Moscow, in which Stalin extracted confessions of sedition from Trotskyists. Why, he asked, had his supporters not been bolder and stood their ground? He came away from the encounter, beside a “bright blue patio where the bougainvillea blazes in the sunshine”, with more questions than he brought.

In the second article, the ground-breaking novelist Angela Carter writes about her experiences on a London maternity ward in 1983, shortly after becoming a mother for the first time at the age of 42. As in her fiction, she captures a strange mix of emotions and characters – the insulting doctor, the bossy nurse, the struggling NHS hospital, the bliss of breastfeeding her son, “who is doomed to love us, because we are his parents”, she writes. “The same goes for us. That is life. That’s the hell of it.”

Read by Adrian Bradley and Melissa Denes. You can read text versions of Martin’s article here, and of Carter’s here.

For more about Carter’s life and work, read A Card From Angela Carter by Susannah Clapp (her friend and literary executor) and The Invention of Angela Carter: A Biography by Edmund Gordon.

If you enjoyed this episode, listen to From the New Statesman archive: when HG Wells met Josef Stalin.

Topics in this article : Artists , pwfree 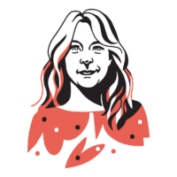 Melissa Denes is features editor at the New Statesman.