Over a period of two and a half years, Michael* looked for a girlfriend on the dating app Tinder. The app showed him thousands of women. In fact, Michael knows exactly how many women he swiped yes to: 4,373 out of 9,103. Fifty-four of these women said yes back, of which 11 agreed to dates. Out of these 11, one stood him up, one became a flatmate and two became girlfriends.

He happens to know these numbers because he spent hours exporting almost three years of his swiping history. This isn’t a simple job: getting the data from Tinder itself took a long time, further wrangling followed. “I thought this would be a very easy task, but it probably took me over an hour in Excel to prepare the data between the Tinder extract and the graph, and then maybe two hours playing with the syntax of Sankeymatic and collaging in Microsoft paint,” he says. “The most boring task was manually categorising matches by going through the conversations.”

Like a lot of users on the Reddit thread r/dataisbeautiful, Michael organised his data into a flow graph, clearly visualising his Tinder “success rate”. He was mainly interested in his match-to-date ratio, which he says he’s “pretty satisfied with”; he describes himself as a “6.5 on a good day”.

Michael is not alone. In fact he is one of a growing number of men sharing their dating app information online for Reddit community members to comment on. But while Michael’s post is relatively harmless, an increasing number of the Incel (Involuntary Celibacy) community have jumped on the trend, using their Tinder statistics to spread their misogynistic ideology.

The r/dataisbeautiful subreddit, which has over 14 million members, was created in 2012 to share visualisations of interesting data. But when the number of Tinder-related posts began to drown out other data infographics, 26-year-old Andrew, who is Canadian, last year set up the sister subreddit r/Tinderdata to concentrate the discussion.

“[This trend] is definitely something that attracts the incel community. A lot of the data posted is also noticeably skewed towards people who find success more rarely than the average person, so it confirms their biases and probably helps ease their anxieties,” says Andrew.

Incels believe they have been sexually ignored by women, whom they feel entitled to sleep with. Taken to the extreme, Incels advocate legalising rape. Being biologically barred from sex is the foundation of the Incel “blackpill” ideology, with the “blackpill” referring to the reasoning that a lack of sexual partners comes from biologically unchangeable aspects of a man’s facial structure, such as their jawline or chin. They call this “lookism”: the idea that women will unfairly choose exceptionally attractive men and ignore the rest. The community largely believes that women – or as some prefer “femoids” – are fundamentally cruel, shallow and self-interested.

A lot of the Tinder visualisations are posted anonymously. One typical graph reads: “Tinder Data as a Below Average Black male in the South”. The graph records over 20,000 swipes and 6 matches. “Yikes bro! I made a fake Tinder account with a male model and got over 130 likes and 90 matches in less than 12 hours. My bio was all rude shit and my job was ‘professional beer pong player’. If you aren’t male model tier attractiveness, it’s worthless even trying anymore. Women literally only want male models in 2019,” reads an anonymous response to the graph. “Unless you have a chin than can cut glass you’re not getting matches on tinder,” reads another reply. 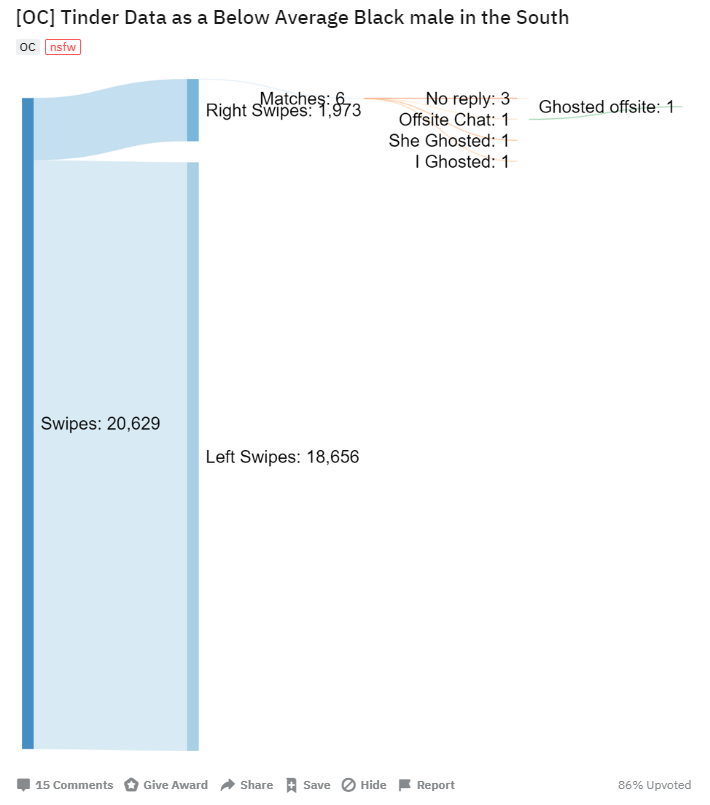 Other graphs on the threads include more general “statistics”, such as a bar chart that claims 0 per cent of women on US dating app Ok Cupid thought that the men they saw were in the top tier of attractiveness. 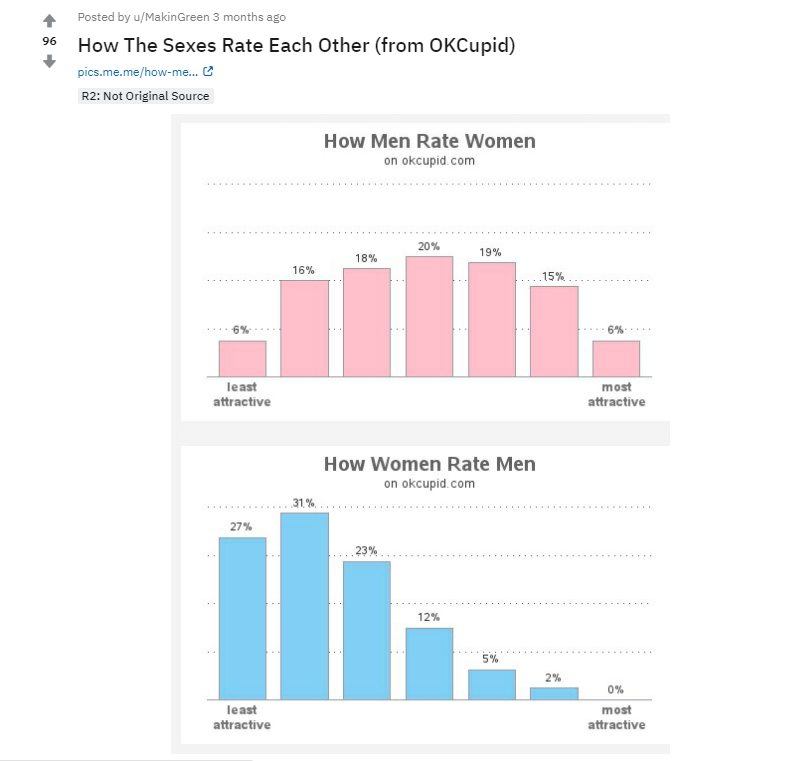 Sam*, a member of the r/Tinderdata thread, also shared vague statistics with me: “According to data from Tinder, they found that less than 1 per cent of men are actually getting a significant match to date conversation ratio. This just shows further that with the implementation and access to dating apps, women’s standards have become totally unrealistic and even spoiled.” Sam is a pseudonym as his Reddit handle was anonymised and he was unwilling to offer his name.

The motive behind these graphs and figures are clear: they reinforce the foundation of Incel ideology simply and effectively. In a community of online men who are often introverted and more comfortable with numeric fact than more abstract demonstrations of emotion, these Tinder graphs provide immediate reassurance. “At its core, Incel sounds really great: it provides an online community, giving support to people who feel lonely, people who often sit on the autism spectrum or have dealt with extreme amounts of bullying in high school,” says Kaitlyn Regehr, professor of media at Kent University, who specialises in Incel culture.

Through her work, Regehr has identified a clear correlation between the rise of social media and the rise of the Incel community. “What is the impact of scrolling through everyone having fun without you? We actually don’t really know that.”

But while these spaces provide a community for lonely men, they also provide a breeding ground for something far more dangerous. In 2014, Incel ideology dramatically entered the public sphere when 22-year-old American Elliot Rodger killed six sorority women in California in a stabbing and shooting spree. In a video posted online, Rodger spoke of his anger at his sexual failings and his hatred towards women. Rodger became an Incel icon, celebrated online as “the supreme gentleman”.

Over Reddit message, Sam* tells me that dating apps are to blame for the rise of involuntary celibacy in the 18-29-year-old male age demographic. “When women are granted access to picking and choosing only the ‘cream of the crop’ when it comes to men, they will do just that, and the same could be said for men, however, most men are struggling to get a DATE on dating apps, whereas, females often complain about being bombarded with offers and people trying to get their attention.”

He adds: “If I could, I would get rid of every single dating app on the face of the Earth. If you look into the data of men that use dating apps versus those that do not, you will find that men who use dating apps are much more likely to use anabolic steroids, partake in fasting, force themselves to vomit up their food, get cosmetic surgery, and have more suicidal thoughts.” While plastic surgery is burgeoning among a small number of Incels, Sam’s comments are typical of the unverified statistics shared on these popular data threads.

The anonymous graphs can’t be fact-checked, but they provide immediate relief for men who feel entirely alone in their inability to find a partner. By blaming Tinder, women and biology, individuals are absolved from responsibility; turning the conversation to anger and retaliation.

Fundamentally, it is these small online patterns that are the key to understanding how young men are radicalised online. Seemingly innocent subreddits can hide militant ideology, masquerading as networks of understanding and support. “Young men are not radicalised overnight,” Regehr tells me. In the case of Incels, it is a radicalisation that has been years in the making.