There is a man named Scott who I have never met, and he makes his wife breakfast in bed every day. Once a month, I load up Scott’s Facebook page and look through pictures of his latest dishes: ham cut into hearts, eggs shaped like flowers, squirts of ketchup spelling “I ♡ you.” Clicking on his profile is like flicking to my own personal TV channel, designed only to entertain me.

Everyone has a Scott. That isn’t to say we are all married to someone with a liberal love of heart-shaped cookie cutters, no. Everyone has someone who they watch on social media. It might be your ex’s new boyfriend, or that girl who posts overly emotional Facebook statuses. Maybe it’s that person who stayed in your home town, having baby after baby. It’s nearly always that couple who break up and get back together again. Thanks to social media, ordinary people’s personal lives have become a form of entertainment: more reality FB than reality TV. 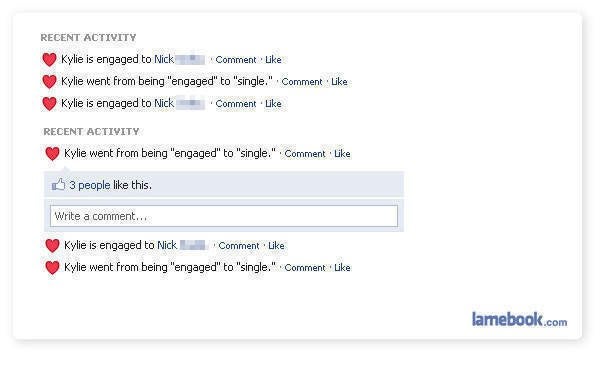 “I became quite obsessed with the Facebook profile of a girl from my hometown who was dating a much older man,” confesses 28-year-old Abigail (not her real name). The older man had a daughter and was married when he first got together with Abigail’s Facebook friend, making a compelling “storyline” for Abigail to watch.

“They had the most ridiculously ostentatious wedding and lavish honeymoon,” Abigail says, explaining she would check the woman’s profile “a few times a week” when bored.

“Then suddenly it all stopped, and all traces of him disappeared from her profile – they weren’t even Facebook friends any more. I felt a weird sense of satisfaction that they had clearly split up not long after getting married, given how OTT they had been about their star-crossed love when they first met.

“It’s so weird because me and this girl weren’t ever close friends, and she will have had no idea I was paying this much attention to her life.”

“It sounds creepy, but it was entertaining”

Abigail is by no means alone. Daisy, also 28 and a pseudonym, tells me she was briefly “fascinated” by the friendship of two girls she met at her university’s drama club.

“Those were the days of writing on each other’s walls and putting up loads of photos, and I would read their messages to each other, see where and when they’d been hanging out, and track their friendship,” she says. Daisy even understood the two friends’ private jokes, and knew their nicknames for each other.

“One of them suddenly started appearing in pictures with a boy and I basically imagined this entire storyline that the new boyfriend was getting in the way of their friendship. It sounds creepy, but it was entertaining – a bit like watching a soap, because the ‘drama’ was happening in real-time, and their lives were really relatable.”

Written down, it does sound almost creepy. Yet many people know the feeling of meeting someone in real life who we have previously “known” online. Should you admit that actually, yes, you already know their name? You also know what they did last summer?

Daisy recently bumped into one of the two friends in real life and didn’t know how to react. She felt awkward, and compares the experience to “meeting a celebrity who you can’t acknowledge you recognise”. Nowadays, when we ask old friends in the pub “What have you been up to?”, it’s frivolous. We already know.

“It’s almost as if it’s a spectator sport”

Is there anything wrong with Abigail and Daisy’s behaviour? A man who I will call “Carl”, aged 25, feels guilty about the way he and his friends “watch” the life of an old classmate.

“My friends and I didn’t like her,” he says, explaining that they regularly talk about the woman’s social media posts in their group chat. Carl squirms when she makes spelling mistakes, and judges the pictures of food that she posts. He is candid about the worst aspects of his behaviour, confessing that his friends gossip about the “thousands” of presents she buys her children for Christmas, or get annoyed when she spends her benefits money on a new phone.

“I consider myself a liberal person, who’d condemn this chat if it was about someone I didn’t know,” he says, admitting his behaviour is both classist and “wrong”.

“I’m against benefits cuts and obviously I think she should be able to use her money to give her kids a nice Christmas, but for some reason I don’t only not challenge this talk, but engage in it? It’s almost as if it’s a spectator sport in some way.

“There’s even quite dark stuff that’s presented as entertainment, such as when she posts screenshots of arguments with her children’s fathers over who is going to supervise the kids at New Year.” Carl hasn’t spoken to the woman in seven years, but “keeps her on Facebook” for “entertainment”.

Using another human being as a personal court jester sounds incredibly grim. Yet many of us know the feeling of refreshing an online argument between two people and enjoying the drama – with some braver souls even commenting underneath with gifs of Michael Jackson eating popcorn or a man unfolding a chair captioned with the words “dis gon b gud”. This reaction is so common online that there is now an entire meme subgenre known as popcorn gifs.


In the 2000s, a website dedicated to the world’s worst Facebook statuses, Lamebook, became incredibly popular. Nowadays, the subreddit r/InsanePeopleFacebook has 443,000 subscribers who laugh at extreme and dramatic statuses posted by the social network’s users. The same online disinhibition that means people post their private thoughts on social media also means we don’t feel as guilty as we should when we watch.

“Recently, a couple I’ve been following broke up but didn’t announce it in any way,” says 25-year-old not-her-real-name Laura. “I became obsessed with looking for ‘clues’ in their Instagram posts about whether they actually were broken up, or just going through a rough patch.

“It was so entertaining, I was almost disappointed when the break-up was confirmed after he posted a picture of his new girlfriend.” When asked if she feels guilty about obsessively “watching” a breakup that was most likely distressing for the couple involved, Laura said: “It was honestly hard for me to think of it like that, because they were choosing to post this stuff online.

“But yeah, it was almost like they were characters, not real people.”

While the “watchers” might be able to justify our behaviour to ourselves, things perhaps change if you hear the perspective of the “watched”.

Last year, 32-year-old Alison Roman was “dumped” a week before a holiday she had planned to take with her boyfriend to Vietnam. Instead of going on the trip, she went on a solo holiday to Mexico. “I had DMs on Instagram asking if my boyfriend and I had broken up,” she says, “It felt insanely invasive – most people were acquaintances but not someone I’d tell this deeply personal news to.”

Alison says she “felt a lot of pressure to explain” herself to people who followed her on social media. “On Instagram a lot of people feel entitled to every detail of my life.”

27-year-old Arun, who did not wish to give his last name, says he feels similar pressure from his family members. He recently got married and is being “nagged” by his parents to upload pictures of the wedding to Facebook. “Frankly I can’t be arsed,” he says. He no longer uploads personal information on to Facebook because “there is always the spectre of Tamil aunties stalking social media looking for gossip”.

These experiences aren’t unique. Some people now feel obligated to tell social media about a life change such as a new job, a break-up, or a death in the family. When vlogger Fleur de Force recently decided against sharing her newborn baby’s name on social media, fans and followers pestered her to share. “I think that it is about time now. She had enough time. It s been like 4 weeks now,” tweeted one viewer who felt entitled to know the child’s name.

Thank you! No, we haven’t shared her name yet. I’m filming a video with her in a couple of weeks, and planning on sharing her name in that  https://t.co/UtCf2Vis8r

While psychologists have long documented the parasocial relationships that develop between celebrities and fans (where one party is invested in another who doesn’t know they exist), it now seems similar relationships can develop between ordinary strangers. When someone puts their life online, we may think we know them – but it is exceptionally jarring for the “watched” when they become aware of this through private messages. While you may think you’re simply sending a friendly question to a person who you’ve become attached to, you could be one of hundreds of strangers who feel entitled to an individual’s private life.

“This phenomena is not at all new”

Alison’s words might not change your behaviour. Even when we know it’s wrong or damaging, we bitch, we gossip, and we stalk. Psychotherapist Dr. Aaron Balick, director of Stillpoint Spaces London, a hub devoted to exploring psychology and culture, explains why we “watch” people on social media.

“This phenomena is not at all new,” he says, explaining that for centuries people have been obsessed with following public figures and living vicariously through their lives. “In fact, neuroscience has shown that we even have neurones associated with certain public individuals.”  You might even, he says, have “a Jennifer Aniston neurone”.

Balick explains that the psychological dynamic behind this process is “identification” – the act of taking someone inside our minds and them becoming, in essence, part of us. “This can happen to real and fictional characters,” he says. “Social media makes this easier because it lowers the bar to our access to others. They are not distant ideals, but local people ‘just like us’.

Is watching someone online inherently wrong? Balick says we need to be able to draw the line. “While fascination with the lives of others is completely normal, it can shift over to obsession or even stalking. This happens when the identification happens at the expense of awareness of our own selves and living vicariously for others replaces us getting on with our own lives.”

There are some who might not be able to relate to this article at all. It is impossible to know just how many people watch others’ lives online because this behaviour is not something that is easy to admit. While famous Instagrammers and reaction gifs show many do have a taste for online glamour and drama, how many more of us are watching ordinary lives?

How many more of us are being watched?