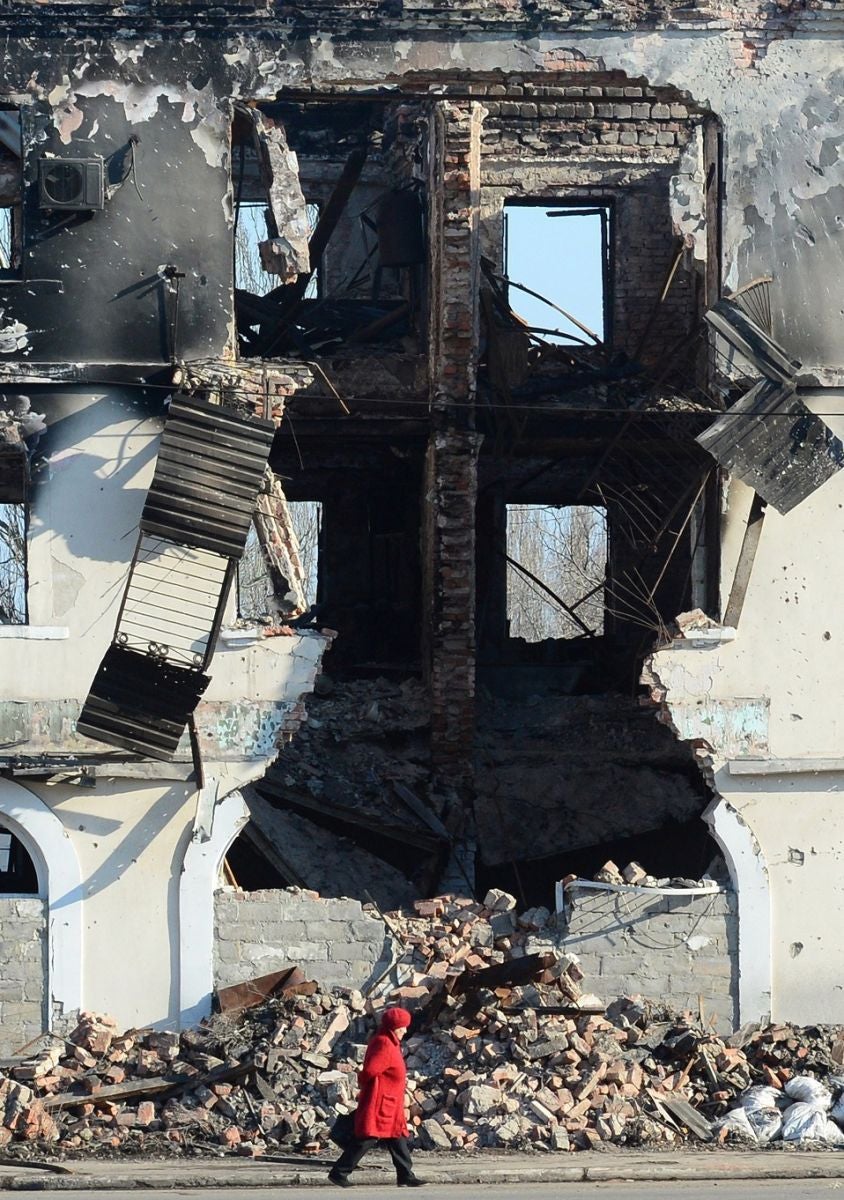 Among the ruins: a collapsed building in Vuhlehirsk, eastern Ukraine, destroyed in the fighting between Ukrainian and rebel troops in February. Photo: John MacDougall/AFP/Getty

Mikhail Vanin, the Russian ambassador to Denmark, looks like a shrewd little man, with fuzzy hair and sharp, Putin-like eyes behind rimless glasses. And he has quite a way with words. Speaking to the Danish newspaper Jyllands-Posten on 21 March, he said: “I don’t think that Danes fully understand the consequences if Denmark joins the American-led missile defence shield . . . If they do, then Danish warships will be targets for Russian nuclear missiles . . .

“It is, of course, your own decision. I just want to remind you that your finances and security will suffer.” I don’t suppose that, after the collapse of the Soviet Union in 1991, most of us imagined that we would hear threats of this crudity being uttered in Europe again.

Gordon Brown: “The solution to this crisis is still global”

It is a little over a year since the west’s relationship with Russia seemed, if inevitably spiky, at least rational and manageable. Now here is a Russian diplomat publicly warning a small member of Nato and the EU of the possibility of nuclear war. How could things have got this bad in such a short space of time? How could the post-cold war consensus have vanished so utterly?

After Viktor Yanukovych’s pro-Moscow Ukrainian government collapsed following the often violent protests of February 2014, Russia started to infiltrate Crimea with its forces as part of a plan that was worked out, we are now told, by Putin himself. They cut off Crimea from mainland Ukraine, annexed it and received the post-dated agreement of a large majority of its inhabitants. After that, the same combination of nasty civilian thugs (one whom I came up against in Crimea had “Rossiya” tattooed across his forehead) and serving soldiers in unmarked uniforms headed to eastern Ukraine. They are still fighting there.

The methodology goes back to the heart of the postwar Soviet era, with a few 21st-century touches. If Moscow’s grip on a country that mattered seemed about to loosen, excuses were found and fraternal forces were assembled to make sure that it didn’t happen – the hard way. Remember Hungary in 1956, Czechoslovakia in 1968, Afghanistan in 1979 and now Ukraine in 2014. Keeping hold of what they have has always mattered to Russia’s rulers. If they let one part go, the whole structure might start to fall down. Above all, it suggests weakness and there will always be those inside or outside the system who might take advantage of it and bring the rulers down. As we shall see, some Putin-watchers think that this pattern is being repeated.

In Russia’s cities, you still occasionally come across a group of fascinated passers-by gathered around an upturned cardboard box, while some dodgy-looking character moves three walnut shells around with admirable prestidigitation. It is illegal to play the game for money because it is crooked. The innocent are supposed to bet on which shell is hiding a dried pea and they almost always – surprise, surprise – get it wrong.

There is a case to be made that Russia’s wholly cynical infiltration of eastern Ukraine and its threats towards the Baltic are an elaborate shell game. While the outside world stares with fascination at the clever manipulation of the walnuts, our attention is being drawn away from the shell that matters: the one with Crimea under it. The more we concentrate on Ukraine and the Baltic – which are, indeed, of immense importance – the more inclined we are to forget that Russia has grabbed one of the choicest bits of territory of a country whose borders it had solemnly undertaken to respect. France, Italy and Greece are keen to ease the sanctions that the west as a whole has imposed on Russia as punishment for filching Crimea. If Russia now stirs things up in the previously peaceful Baltic, our eyes will be distracted even more from the shell containing Crimea.

That is the one place that matters most to Vladimir Putin. Neither he nor any other Russian leader will give up Crimea, except as the result of the most extreme force – and that is pretty unlikely, surely? Getting hold of Crimea last year pushed Putin’s approval ratings in Russia beyond the 80 per cent mark. When not long ago a rather ghastly teenager at a Crimean school sang for my television crew and me a welcoming song about Crimea being the diamond of Russia, he was absolutely right. The Crimean Peninsula (and especially the southern part of it, which includes Yalta, Sevastopol and Balaklava) is as good as it gets anywhere.

Take Balaklava: it’s a delightful seaport, its white-painted house fronts built in the restrained, neoclassical style that was one of the best achievements of tsarism’s later years. On a sunny day, of which there are many, it is like the south of France must have been before the rich arrived. For five years after the collapse of the Soviet Union, Balaklava was a closed town. Even the relatives of people who worked on its top-secret nuclear submarine base, which lies in full view on the other side of the port, had to carry special passes if they went to visit them. The dark mouth of the tunnel that has been carved into the mountainside so that Soviet submarines could slip into their underground workshops, impregnable against any form of air attack, is clearly visible just across the water from the excellent fish restaurants opposite. It looks like something out of an early James Bond film.

In the decades after Ukraine became independent from Russia in 1991, nothing much was done about Balaklava. One or two top politicians built hotels there but because of all the political troubles, the work on them was never finished. Slowly the holiday trade is starting to return and the little stalls along the quayside are opening up to sell pictures of Putin and bath towels with the emblems of the old Soviet Union. You could easily imagine Anton Chekhov strolling beside the moored boats in his white suit, gazing across the water.

Balaklava, like the rest of Crimea, seems utterly Russian. Practically all of the opinion polls and all of the anecdotal evidence indicate that the majority of the people here are willing to be part of Russia again – not surprisingly, given that about 60 per cent of them, perhaps more now, are ethnic Russians. Twenty-four per cent of them (these figures are based on the 2001 census, so they could have changed) are ethnic Ukrainians and 12 per cent are Crimean Tatars, some of whom have returned from the brutal exile in central Asia to which Stalin subjected about a quarter of a million of them in 1944.

But ethnicity isn’t the only deciding factor in people’s attitudes; class enters into it, as well. Last year, the relatively small proportion of educated, middle-class Russians in the region mostly seemed keen on staying with Ukraine, because they identified it with the freer political climate of the European Union. Now, however, they have gone quiet and accepted the change. There is no sign of any determined fightback against Russian rule. A former teacher, an ethnic Ukrainian who lost his job and was sentenced to community service for attending a celebration of the Ukrainian poet Shevchenko and wearing the yellow-and-blue ribbons of his country, assured me that he and his friends would not do anything to break the law. It’s hard to think that there will be any serious resistance to Putin’s Crimean coup.

Crimea should never have been separated from Russia in the first place. In an act of celebratory foolishness, Nikita Khrushchev (who was born near the Russian border with Ukraine) awarded it to the Ukrainian Soviet Socialist Republic in 1954 after he emerged as Stalin’s successor. At the time, it meant nothing more than jiggling around with a county boundary in Britain.

In December 1991, when the Soviet Union collapsed, the leaders of Russia, Ukraine and Belarus met in the palace in the Belarusian forest of Belovezhskaya Pushcha to agree to the carve-up of the old state. Boris Yeltsin was the new Russian leader and he was too weak and too punch-drunk as a result of everything that had happened to demand Crimea back. Yet Russia’s case was a good one – until Putin annexed the peninsula at gunpoint. Having done this, the president cannot possibly pull back. If he were to lose Crimea, he would be finished.

Putin is, in person, a very different man from the swaggering, macho public image. On each of the three occasions when I’ve talked to him, I have found him polite and pleasant and certainly not domineering. The three occasions could have been four, except that when I went to film at the mayoral office in St Petersburg where he worked in 1991, he didn’t seem important enough to interview: mea maxima culpa. He has been phenomenally successful ever since; he is the most successful leader in Russia since Stalin. But does that make his position safe?

The veteran Polish intellectual Adam Michnik, one of the heroes of the 1980s struggle against the Soviet Union and a perceptive observer of Russia today, thinks not. He gave an interview to Le Monde recently in which he suggested that the brutal murder of the former Russian deputy prime minister and liberal opposition figure Boris Nem­tsov had been carried out by a group within the security system that wanted to force Putin to be tougher in eastern Ukraine: capturing Kharkiv, Dnipropetrovsk or Odessa, for instance. It was a warning, he believes.

According to Michnik, Putin thinks that he, too, is in a certain amount of danger, not so much from the plots within his power structure as from the kind of popular revolt we saw on the streets of Ukraine when Yanukovych fell. Michnik says that someone close to Putin has told him privately that the live coverage of the fall and murder of Muammar al-Gaddafi in October 2011 was a terrible shock to the president. “His worst fear,” Michnik said, “is to see a Maidan [the anti-Yanukovych demonstrations in Kyiv] emerging in Red Square.”

If Michnik is right, then taking hold of Crimea and fomenting trouble in eastern Ukraine and perhaps the Baltic is a matter of personal survival for the Russian president. A Ukraine that might one day be prepared to allow Nato to base missiles on its territory is not just an existential threat to Russia – it is an existential threat to Putin, just as the potential loss of Hungary was a personal threat to Khrushchev in 1956 and the potential loss of Czechoslovakia and Afghanistan were to Leonid Brezhnev in 1968 and 1979, respectively.

We can certainly blame the US for its triumphalist approach after 1991, refusing Russia the hand of full friendship and alliance. We can blame the EU for dangling the promise of association and eventual membership in front of Ukraine’s eyes as though it were any other European outpost. But we would be very foolish indeed if we failed to understand that Vladimir Putin, however relaxed he may seem, now thinks that he could be fighting for his life – and that he will be prepared to use every threat, every trick and every weapon in a disturbingly large arsenal in order to protect himself.