In August 2009 George Osborne said it would be “humiliating” if Britain’s AAA credit rating was downgraded and later that it was “absolutely essential we don’t have the downgrade that hangs over the country at the moment”. In the Commons in 2011, our part-time chancellor gloated that “our credit rating had been put on negative watch. Now, however, thanks to the policies of this coalition government, Britain has economic stability again.” Presumably the inference is that, after the Moody’s downgrading of the UK’s AAA rating on 22 February, we now have economic instability. Osborne suggested that maintaining the AAA rating was the number-one benchmark by which he should be judged, so we need to keep him to his word. It isn’t as if he wasn’t warned. And we seem to be heading for a sterling crisis, as there is growing pressure on the pound.

The only bit of apparently good news for the government came from the labour market. On 20 February, the Office for National Statistics reported that in the past quarter UK unemployment had fallen by 14,000 and employment had reached a “record” level of 29.7 million. Many took this as a vindication of the government’s economic strategy but it wasn’t. Youth unemployment was up by 11,000 and real wages fell once again. Also, the working-age population has risen, so the employment rate, calculated as a proportion of the working-age population, was below its old level spanning the entire period from 1997 through to the start of 2008.

It turns out that the news on the labour market isn’t very good. In fact, the unemployment rate no longer captures the full picture of spare capacity in the market, as many workers are employed but say they would like to work more hours and well over a million part-timers want to go full-time. These workers are “hours-constrained”. In part, this is related to real wages not growing, and many firms have reduced overtime and extra shift payments. The jobless rate takes no account of this “underutilisation” of the workforce.

Together with David Bell, professor of economics at the University of Stirling, I have devised a new “underemployment index”. It is based on the idea that the best possible outcome for the labour market would be one in which every worker is able to work the number of hours he or she wants. There is a host of reasons why this nirvana will not be realised, but it is a useful concept, in the sense that deviations from it could occur because some workers are unemployed, or because some workers already in a job are offered fewer hours than they would like, or both. The size of the deviation measures the real level of excess capacity in the UK labour market.

We use data on individuals from the Lab – our Force Survey that is released to researchers, and is used to calculate the number of unemployed. We then calculate the number of hours unemployed people would work if they had a job, assuming they work the number of hours that we calculate are consistent with their characteristics. We add these to the extra hours existing workers say they would like to work and we subtract the hours of those who wish to cut their hours. Finally, we calculate a rate that measures the proportion by which actual hours fall short of desired hours. The graph (below) shows both our index and the published unemployment rate for the period 2001-2012. 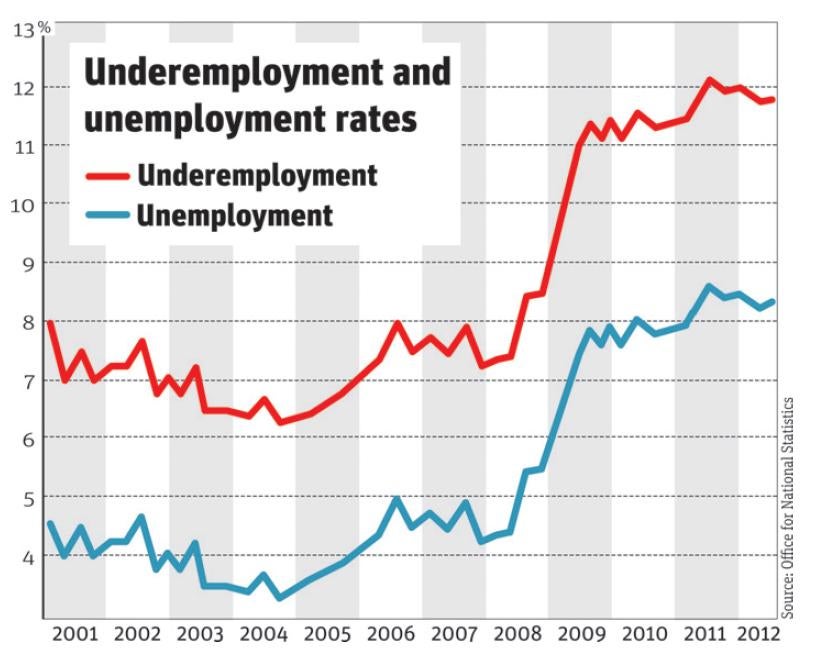 There are two clear messages from our index. First, underemployment consistently adds to the measured excess labour capacity in the UK labour market. Even though unemployment rates were low between 2001 and 2007, our index exceeded the unemployment rate by 36 per cent on average between 2001 and 2007 and by 38.7 per cent between 2008 and the second quarter of 2010. Those wanting to work more hours consistently exceed those who want to work fewer hours in the UK labour market.

Second, since the start of the recession, underemployment has been contributing an increasing share of overall excess labour capacity in the UK. Unemployment may not have increased much recently, but there has been a substantial rise in the number of extra hours that those already employed would like to work. Our index exceeded the unemployment rate by 42.4 per cent between the second quarter of 2010 and the third quarter of 2012, down from 44.9 per cent in the second quarter of 2012. In the last two quarters for which we have data, our measure of excess capacity is higher – at 43.8 per cent under this coalition – than it has been since our series started in 2001 or the recession began in 2008.

It might seem better to have some work rather than none and, therefore, there might be a tendency to discount short-time working as not much of a problem. But our latest research also suggests that this group is almost as unhappy as the unemployed. Furthermore, when (and if) the upturn comes, reductions in unemployment will be delayed, as it is likely that those already employed will be offered extra hours before new workers are hired.

It is clear that the coalition is bad for jobs.

David Blanchflower is economics editor of the New Statesman. This column is written jointly with David Bell