CALAIS – The migrants who gather in this small city in northern France have become almost as much of a fixture of the local landscape as the cafés and brasseries.

Thousands have made their way here from countries such as Eritrea, Syria and Afghanistan, via the Mediterranean sea, the Balkans or, most recently, Belarus. Their destination lies roughly 40 kilometres north-west: the English coast.

On 24 November, at least 27 people trying to reach the UK died when their boat capsized. But this has not deterred migrants from making the crossing, having travelled thousands of miles to reach the country they regard as an El Dorado.

“I want to make my life in England,” Jan, a 22-year-old Afghan, told me. “I don’t want to stay in France.” He has made seven attempts to reach the UK already and he would try again despite the recent tragedy, he said. 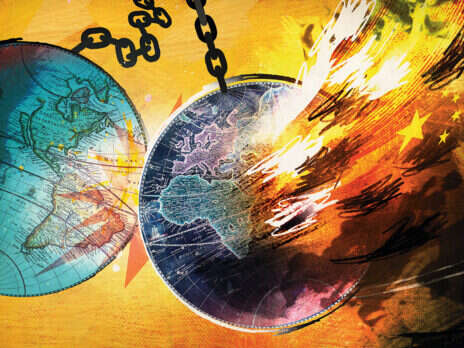 The UK government insists that the solution to Channel crossing crisis is more policing. The UK accuses France of not doing enough to prevent crossings. Prime Minister Boris Johnson’s government wants French authorities to clamp down on migrants, with the assistance of British police. French President Emmanuel Macron has rejected those proposals, seeing them as an unacceptable breach of sovereignty.

The northern French coastline from where migrants launch their boats stretches for roughly 100 kilometres. Even if France accepted the UK’s proposals, policing this area in its entirety is materially impossible.

Despite the British emphasis on security, there is a growing understanding on the other side of the Channel that more policing will not make the problem disappear. The recent rise in small boat crossings is thought to be in part down to other methods of travel, such as by car and truck, becoming unviable due to increased security. With beefed-up defences around Calais’ road and rail network, migrants have turned to the sea instead, despite the risks.

As a result, there are growing calls in France to reopen negotiations on a crucial agreement with the UK. The 2003 Le Touquet accord moved Britain’s passport controls on to French soil, in effect placing the border in northern France. It has been widely criticised across the political spectrum for placing the burden of policing on French authorities.

Because of the Le Touquet agreement, it is almost impossible for migrants wishing to seek asylum in the UK to enter the country legally. In order to apply for asylum, migrants must reach British soil. But with the UK’s passport controls being in France, they would be refused were they to try to enter via official means.

That the UK has outsourced some of its border enforcement to the French authorities has caused consternation in French politics. Several leading candidates in next year’s presidential election support renegotiating the treaty.

The former centre-right hopeful Xavier Bertrand, the head of the Hauts-de-France region which includes Calais, last month said of migrants: “Let them take the ferry” to England. The far-right candidates Éric Zemmour and Marine Le Pen also support scrapping the accord. During 2017’s presidential campaign, Macron also said the treaty should be renegotiated. In office, though, he is one of the only mainstream politicians to back the accord as it is.

Those who propose renegotiating the agreement put forward several arguments. The first is that the accord forces the majority of migrants who seek to reach the UK to travel illegally across the Channel on unsafe boats. Moving UK border controls to Britain should help persuade migrants to take safer routes to reach British soil, where they have a legal right to seek asylum. That would mean less loss of life, the proponents argue. “It’s clear that people should not have to risk their lives to come to Britain and apply for asylum here,” said Zoe Gardner of the Joint Council for the Welfare of Immigrants.

The second is that the material conditions underpinning the accords have changed. In 2003 both the UK and France were members of the EU. Today, the UK has left the EU and with it the bloc’s “Dublin Regulation”, under which migrants can be returned to the first EU country they entered. That is acting as a pull factor for migration across the Channel, as migrants who make it to the UK know they will no longer be sent back to EU countries they travelled through before arriving in Britain.

The third argument is financial. Placing the British border in France means it must be heavily policed, and the British contribution towards this is estimated to be a fraction of the cost as security has increased in the nearly two decades since the Le Touquet deal was signed. In July the UK said it would pay a further €63m towards the cost, but as of last month, France said it still hadn’t received the funds.

The fourth is political and humanitarian. The inhabitants of cities and towns on the French coast have become used to a kind of coexistence with migrants. Relations are generally civil; most local residents empathise with the migrants and few are openly hostile to them.

“They behave well,” Émilie, a fish seller in Boulogne-sur-Mer, told me. Still, most residents are tired of the refugee camps in the outskirts of their cities, and despair of seeing people, including women and children, sleeping rough in parks and train stations. Renegotiating Le Touquet would, it is hoped, alleviate tensions in this part of northern France, which leans heavily to the far right.

Rescinding the accord would be fraught, possibly acting as an additional pull factor for migrants to the area. “France [withdrawing] unilaterally from Le Touquet would make sense politically, but would probably lead to increased migration toward the Channel and a risk of new tragedies,” said Benjamin Haddad, senior director of the Europe Center at the Atlantic Council think tank.

One compromise solution could be for Britain to take asylum applications on French soil, which would save migrants from having to make the dangerous crossing to the UK. Britain has rejected this offer, saying most arrivals should be sent straight back to France to deter crossings.

On a regional northern French train, I met Ali, a softly spoken 24-year-old Syrian from Idlib. Via Google Translate, he said he had tried six times to get to England by boat, including one attempt when his boat capsized on the same day as the 27 migrants died last week. “I thought I was going to die,” he said. He recalled that his group had tried to request assistance from the UK coastguard, but were told British ships could not enter French waters. They were brought back to France by French authorities. He said he was going to try again in a few days.

Though Ali has relatives in Germany, he told me he would settle for nothing but the UK, a country he said he loves. When he found out I was British, he had a question for me. “Do you know how I can apply for asylum [in Britain] other than by sea?” If they have their way, several would-be leaders of France will soon have an answer for him.

[see also: Humanity, not hostility, will solve the migrant crisis]