Since returning from Cop26 in Glasgow, where I took a leading role in the conference’s science pavilion, I have been asked whether the world is now on track in dealing with climate change. It is not, I’ve replied, as I’ve said after the many previous Cop meetings I’ve attended. But this latest conference does provide a glimmer of hope. What happened in Scotland could, perhaps, mark the vital turning point in the struggle to avoid catastrophic climate breakdown.

Over my 25 years of climate research it has been dispiriting to see such little progress at these annual summits. The agreement made this time, the Glasgow Climate Pact, does however feel different. It provides a clear target aimed at avoiding the most catastrophic impacts of climate change, a 45 per cent reduction in carbon dioxide emissions by 2030 relative to the 2010 level. And although current pledges to reduce emissions are insufficient, countries agreed to come back next year with enhanced levels of ambition. This is an accelerated timetable compared to what was agreed at the landmark Paris Agreement in 2015. The urgency to act felt by the millions affected by ever more devastating heatwaves, floods and droughts seems to be getting through.

At long last, governments have moved beyond the blah blah blah and are now talking the specific language of short-term verifiable targets. They will convene once again, next year in Egypt for Cop27. It is vital they maintain the progress made in Glasgow. If they do, and a corner really has been turned in our collective efforts to halt climate change, it will be thanks to the efforts of thousands of dedicated delegates from across the planet, many of whom have devoted years of their lives to advancing these negotiations. It will also be thanks to citizens worldwide who have steadily built up the pressure on their politicians to act. 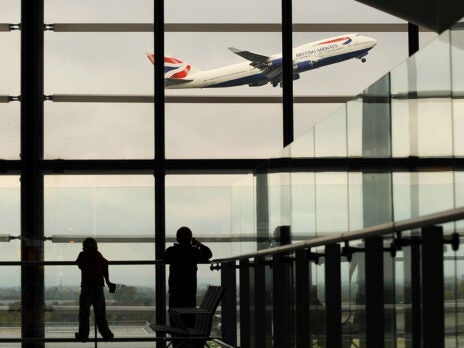 On Saturday 6 November, I found the sight of the protesters marching through the rain in Glasgow inspiring. The dramatic rainbow I photographed framing their banners – “How many Cops to arrest climate chaos?” said one – seemed in keeping with a sense that their demands are starting to be heard. And what makes climate action much more likely is what the latest science is able to say and do.

The most recent evidence from the Intergovernmental Panel on Climate Change is frighteningly clear. Widespread and rapid changes in the atmosphere, ocean, cryosphere (the frozen areas of the earth) and biosphere have already occurred. Limiting global warming to a specific level requires limiting cumulative carbon dioxide emissions so that they reach net zero. Strong reductions in other greenhouse gas emissions, such as methane, are also required.

Countries have resolved to pursue efforts to limit global warming to 1.5 degrees Celsius and the science is clear on what needs to be done. That is why the 45 per cent reduction in carbon dioxide emissions by 2030 is written into the Glasgow Climate Pact. It is also why the pact recognises that accelerated action is required based on the best available scientific knowledge.

The science doesn’t just set out the roadmap. Crucially, it also provides the means to measure countries’ progress along it. One of the most striking presentations at the science pavilion at Cop26, hosted by the Met Office with the IPCC and the World Meteorological Organisation, was provided by the Global Carbon Project. This initiative shows a wealth of data on how each nation’s emissions of carbon dioxide are changing and means countries can be held to account for their climate promises. It is this enhanced aspect of transparency that, above all else, gives me hope that the mounting pressure on leaders can be made to stick.

That pressure is heightened by meeting in person. Walking the halls at Cop26, I saw how the concept of global equity, a cornerstone of the Glasgow Climate Pact, comes to life when people meet face to face. Leaders of nations, such as those from low lying island states, threatened by existential threats, directly confront leaders from the rich global north. Indigenous leaders provide powerful first-hand testimonies of their survival that is threatened by global pollution. Young people protest. Meetings in person are a vital pre-requisite for further progress. In this sense, it will be worth thousands of people travelling again next year, to Egypt for Cop27, if this helps turn the words agreed in Glasgow into rapid action.

But rapid action isn’t just the responsibility of governments. Financial institutions, industry, local authorities and citizens all have a stake in making a successful transition away from climate catastrophe and towards a net-zero world. The true test of success will come not with fine words but with hard data. When the climate numbers start showing a deviation from the current trends – that is when we’ll know we really have turned a corner.

Peter Stott is a climate scientist and recently published Hot Air: The Inside Story of the Battle Against Climate Change Denial.