Everyone of a certain age remembers the Blue Peter advent crown. Fashioned from a wire coat hanger, some tinsel and four candles, it was the sole reason an entire generation of Girl Guides was determined to try to get their firefighter badge (well, that and the promise of sliding down the firemen’s pole – or am I just speaking for myself?). But I must be honest. It wasn’t at the front of my mind when I began watching the Queen’s Jubilee special edition of Grayson’s Art Club. I was expecting stuckist daubs, crocheted corgis and the odd risqué object formed from clay, not Prue Leith deciding to ignore every health and safety regulation going by constructing a similar highly flammable monstrosity. Though now I think of it, having voted for Brexit, perhaps she is already impatient for Jacob Rees-Mogg’s promised bonfire of the quangos.

Leith arrived at the studio, dressed as a rainbow, with an idea for a chandelier-come-installation. It was going to be majorly camp, and would make use of her collection of old teacups, which would hang from it along with many strings of coloured beads – and yes, there would be candles, too, which, as Grayson pointed out later, did rather bring John Noakes et al to mind. Not that he cared. On the contrary. If Grayson’s Turner Prize-winning pots have their roots in the fine earthenwares of the late 18th century, his TV shows also connect to those of the past: to Blue Peter, Vision On, The Generation Game. As for his Art Club, it’s as British as the Queen herself, purpose-built for a nation whose people have turned bunting into a kind of religion; for whom the words “Crayola” and “crafting” are far more beautiful than anything in Milton or Shakespeare; who think nothing of using a boiled sweet as a ruby in their (not very) convincing replica of the crown jewels.

[See also: The Jubilee Pudding celebrates a historic milestone with piles of jelly and lashings of cream]

Grayson’s wife, Philippa, who is a psychotherapist as well as his co-presenter, said that a surprising number of people dream about the Queen – and at times I did feel I was in a nightmare. Margaret Seaton’s woollen model of Sandringham, the result of spending 15 hours a day for two years with her knitting needles clacking, was bad enough; creepy in the way that model villages are creepy. But it was nothing compared to the comedian Harry Hill’s project, which involved him sticking a pair of huge foam lips over his own, covering them in black paint, and pressing his face against a roll of paper as he said the words: “Congratulations, Your Majesty, on your Platinum Jubilee.” Honestly, this happened. But hey, the idea of the Art Club is that everybody can join in. Even the utterly terrifying. Even – there may be some crossover here – Brian May fans (work inspired by Queen, the band, was popular). 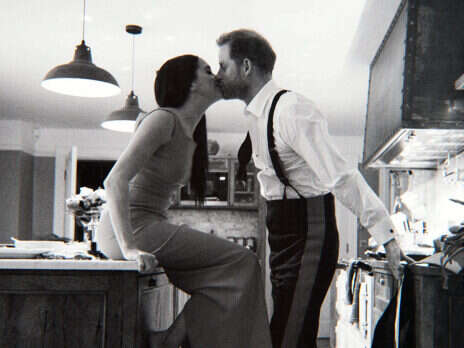 At the heart of it all, like some crazed impresario lining up new music-hall acts, was Grayson, who was all the while attempting to choose work submitted by the public to include in a special Jubilee exhibition. I’m still not sure if this exhibition is merely notional, a realm to be wandered only in our minds, but if it is real, I boggle at the thought of where it might be held. The Tate? The Serpentine? The end of Blackpool Pier? You would take his wild praise for the loopy things people send in as insincere were it not for the fact that he is fine with liking what others do not – and this, in turn, is what makes him so likeable. He doesn’t give a damn for what is woke or modish.

[See also: Farewell to the iPod – and the age of the personal music library]

At one point, he and Philippa and Prue watched TV footage of the Queen’s coronation, and when it was over – when the dukes and earls were ready to throw their coronets in the air – he pronounced himself moved. “A human sacrifice!” he said of HRH, swarmed by chinless men in ermine. And then, with more relish: “She looked vulnerable!” The whole production was, he pronounced, a seriously good bit of performance art, something that may still have been in his mind when, later on, he sang Billy Joel’s “Just the Way You Are”, seemingly in honour of HMQ, while boogying round the room. Oh, boy. If television is, as I believe it to be, a barometer of our national cultural health, this country is getting madder by the minute.

Newsletters from the New Statesman View all newsletters
Subscribe for the best of our politics, international affairs, culture and business coverage, straight to your inbox
THANK YOU
Topics in this article : Queen Elizabeth , TV reviews

This article appears in the 25 May 2022 issue of the New Statesman, Out of Control

@msrachelcooke
Rachel Cooke is a writer at the Observer. In the 2006 British Press Awards, she was named Interviewer of the Year.