While the entirety of the film industry is built on the idea that people have capacity for change, the reality is somewhat different: we are an agglomeration of chemical reactions and skin the character of which is finite. Sometimes, though, we can find workarounds that improve us without altering our essence; not necessarily cinematic, but not necessarily ineffective either.

José Mourinho is in need of such change. Not so long ago, his Manchester United team were in reasonable shape, a clear second in the league and one win shy of putting pressure on leaders, Manchester City. Except when the teams met United could hardly muster a kick of the ball and when they did it was to punt it at no one. Defeat eliminated them from the title race, the manner of it adding an extra chastening layer, and though they scrounged a couple of narrow victories thereafter, they then lost to Bristol City in the League Cup before drawing three consecutive league games. Meanwhile, Mourinho frantically apportioned blame in every conceivable direction – well, every conceivable direction but one – calling out players, former players, owners, suits, schedulers, referees, luck and Canada, his behaviour aping the various other occasions on which he and his job have grown ill with each other.

Given that Mourinho and Manchester United are emotive issues, I should probably declare my interests: I do not particularly like Mourinho. I like that he is someone to whom no one is ambivalent – ambivalence has no place in football – and I liked that he was cheeky, rude and creatively bastardly, until he became tediously, desperately and paranoidly bastardly. I do not like the pubescent egomania that has Mourinho place himself at the centre of every narrative, I do not like weirdness that prevents him enjoying the time of his life embracing the challenge of his life, and I most definitely do not like his tendency to overthink himself into pessimism whenever faced with the mildest threat. This is mainly because I do like Manchester United, whose values of flair, zest and risk I am conditioned to passing off as my own.

Because of all this, the media has savaged Mourinho in recent weeks. And to an extent, this is fair, United’s travails are partially his fault.

During his first summer at the club, his recruitment guarded against his worst instincts. In came four free spirits, seemingly incapable of rigid, reactive football. But that was more or less what the team delivered, and it is hard not to wonder how the talented but feeble Henrikh Mkhitaryan might have fared with a manager more attuned to his ilk.

The following summer Mourinho reverted to type, adding a central defender to a squad already well furnished in that area, along with two useful but unspectacular and archetypal lumps. Nemanja Matic, a deep-lying midfielder, cannot tank about the pitch nor supply quick forward passes, while Romelu Lukaku, a striker who plays like he has his hands in his pockets, is imprecise of touch and finish. Neither is as good as their equivalents in successful United teams, and neither are as good as the best in the league, never mind the world, both evidenced Mourhino’s outdated inclination to play football focused on competence rather than brilliance.

During the 26 years that Alex Ferguson led Manchester United, he had the self-confidence to regularly refresh his backroom team, keeping abreast of new ideas and deploying expertise different to his own. This deepened rather than compromised his control, allowing him to focus on little details and the big picture, safe in the knowledge that everyday mundanity was under control. Mourinho, on the other hand, has a less mature approach to such things, retaining the same two faces throughout his managerial career and changing little while the game has innovated around him. 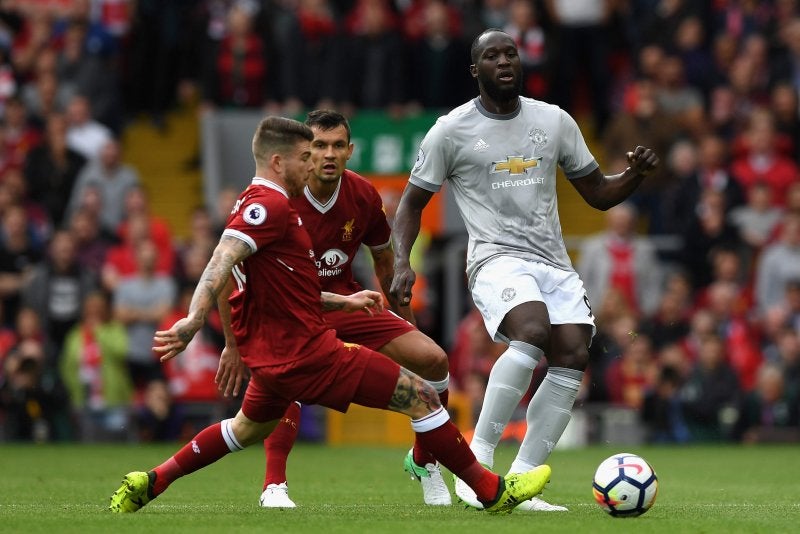 Romelu Lukaku is beaten to the ball in the 0-0 draw against Liverpool. Photo: Getty

This is not to say that his methods do not add value – football remains a simple game, and United started the season in prolific form. But in their first big test, away at Liverpool, Mourinho – admittedly deprived of his best player Paul Pogba – decided that a draw was a decent result, even though his more confident team were more likely winners of an open game. So a 0-0 draw ensued, and while no one could have predicted the form of Manchester City, who have dropped just four points all season, he should have known that a football team has lots of moving parts, and as such, momentum is hard to find and easy to lose. What began as a single negative strategy quickly became a rash of negative media coverage, quickly became more negative performances, quickly became general negativity.

In particular, United lost all attacking cohesion, their talented forwards apparently without a plan of how best to go about things, anticipating their class rather than imposing it. Consequently their threat was sporadic, and there remains a sense that Anthony Martial, the squad’s most mercurial talent, is perennially one off-day away from being dropped, while those who fit Mourinho’s physical and psychological pro forma are shown greater understanding.

Much of this deterioration could be put down to the absence of Pogba – without him, United could not play through midfield – and then, once he returned, he spent too long playing too deep. Strangely, given Mourinho’s off-the-pitch love of the pre-emptive strike, when competing he seems to focus on stopping the opposition rather than on making his own team unstoppable; on finding a way to win rather than simply winning.

But though it is easy to blame him for some things, it is facile to blame him for everything. Mourinho arrived in Manchester as United’s third manager in three seasons, inheriting a clueless, turgid, cowardly team who had contrived just 59 goals in 38 league games. In the years since Alex Ferguson’s retirement, 15 players had joined at a rough cost of £385.64m, probably only two of whom are now in the first XI. Next season it will likely be one. That is a mess by any standard, but enough was extracted enough from it to deliver two trophies, and though it was rarely pretty, it is hard to imagine any manager in the world returning more, and now United sit third in the league, are in the knockout stages of the Champions League and have played better football. There remain legitimate doubts as to whether Mourinho will take the team the final step of the way, but in the meantime that is notable progress.

Mourhino has also struggled because of United’s grasping owners. Servicing the debt incurred by the Glazers when purchasing the club, along with the various dividends they paid themselves, meant eight years of austerity during which Ferguson’s unique genius delivered trophies despite them – and how might he have done unfettered? Soon after he retired, the board realised that they could no longer be as parsimonious, but there was no quick fix for a generation of avarice. 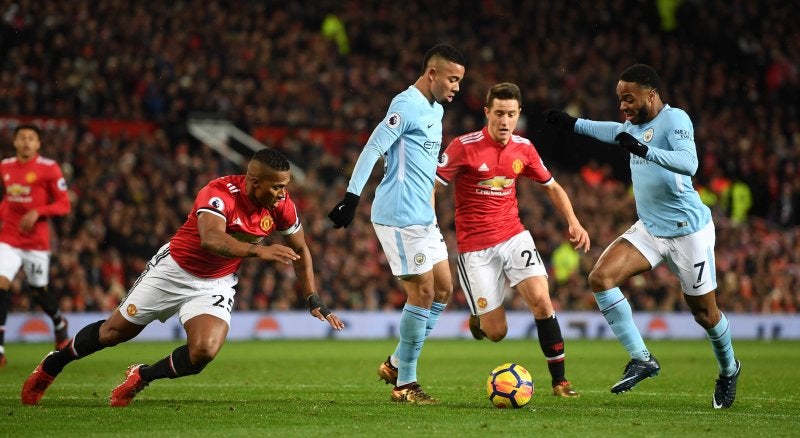 Manchester City’s Raheen Stirling runs on to the ball in the club’s defeat of United. Photo: Getty

This was cast in starker reality when City were taken over by Abu Dhabi’s royal family, who embarked on the most lavish spending spree in the history of sport. When Pep Guardiola arrived at the club the same summer that Mourinho joined United, he found David Silva, one of the greatest players ever to play in England; Sergio Agüero, one of the finest strikers in the world; Kevin de Bruyne, a brilliant midfielder on the cusp of his peak; and Raheem Sterling, a key man in Liverpool’s title challenge of 2012-13. These riches gave him freedom. He could sign Gabriel Jésus, a young striker, without needing him to come off immediately; he could sign Bernardo Silva, as close to copy of David as exists, and barely use him; he could buy Nolito then sell him a year later at a loss of £10m; he could spend £16.20m on a goalkeeper, then £36m on another goalkeeper without needing to recoup any of the initial outlay; and he could spend £130m on full-backs because the central areas of his first XI were already in place. By way of comparison, Mourhino was not permitted the extra money to buy a winger to serve Lukaku abd though he too wanted full-backs, almost all his money went on spinal essentials. He is still trying to force a tune not just out of his own bad signings, but out of three other managers’ too.

When he makes observations such as these, Mourinho is accused of deflecting from his own failings and perhaps he is – but that does not mean he does not have a point. Similarly, perhaps he is, as some people say, managing expectations after previously declaring his team to be title contenders – but there others, with years of experience watching title-winning sides, who are reassured by how much work he thinks is still to do. He did probably underestimate just how good City would be – but then who didn’t?

Guardiola is, without doubt, a footballing genius who has changed how we think aobut the game and the way that it is played. There has likely never been anyone better at maximising elite talent, and given that raw material, we know that Guardiola football generally beats Mourinho football, and handily. But the principal difference between Manchester City and Manchester United is still not the difference between Guardiola and Mourinho, because City are the PR wing of a repressive oil emirate, while United are the piggy bank of an immoral family of carpetbaggers. One party wants to win at any cost and the other wants to win only if its bottom line is not compromised. One has put a billion pounds in and the other has taken a billion pounds out. In such contest, where is the smart money going? 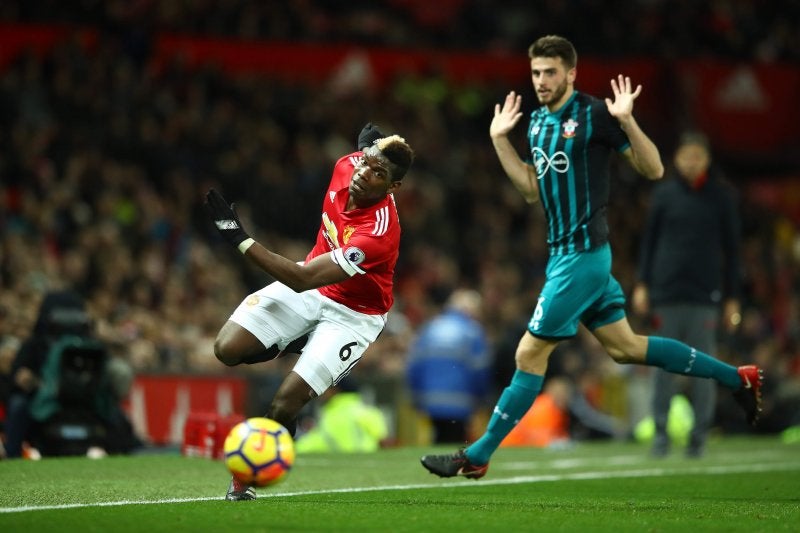 Accordingly, United’s predicament is far from all Mourinho’s fault, but nonetheless he and they now find themselves at a crossroads because the league is gone and during last weekend’s flaccid draw against Southampton, two significant things happened: Pogba spent the majority of the game listlessly hanging around in front of the defence, and Lukaku was concussed. As such, when United played at Everton two days later, Pogba dominated in a more attacking role as though his previous effort was some kind of protest, while in the absence of Lukaku, the team were more fluid and unpredictable. “We found a way to play,” said Mourinho, “and we played really well”. For precisely such occasion was the chin-stroking emoji invented.

The question now, then, is how he responds to such unforeseeable discovery. He cannot change who he is, but can he change what he thinks instead? Is he capable of learning from a rival? Does he have the strength to let things be and convince himself he planned it this way all along? … Or will he allow chemistry to take hold and morbidly submit to the elements? It is going to be fascinating finding out.