Leon Knight was a footballer. At the age of 29, he finds himself without a club, after he was released from Glentoran after allegedly making homophobic comments on Twitter.

Until yesterday, though, there was a place where Leon Knight still had an audience: Twitter.  As @leonknight82, he had 102,800 followers, who enjoyed such banterous tweets as “Hoes have to know 80% of men have a sat nav hoe alert device programmed into our brains you can’t fool us lol #beat&delete”. A month ago, he went after Jamie O’Hara, claiming that his wife Danielle was a “hoe” and trying to provoke both of them into responding to his increasingly obscene tweets. (I made a Storify of that here; it’s pretty unpleasant).

Anyway, for the last couple of days, Knight has been trailing “Slag Alert Pictures”, his latest brave foray into the world of “exposing” women who’ve sent dirty pictures to their boyfriends. He even created a hashtag, #SAP. The plan was to tweet compromising pictures of these women, to shame them – and entertain his fans. The stunt added tens of thousands of followers.

Now, I’m not going to detain you with amateur psychology on Leon Knight, who seems to veer between common or garden misogyny and “person you’d cross the continent on avoid”. I just wanted to make a record of exactly how this went down.

First, Knight tweeted about the #SAP idea, and published an email address for people to send pictures to.

He claimed that someone had sent the following email, and he’d therefore decided to have mercy on them: 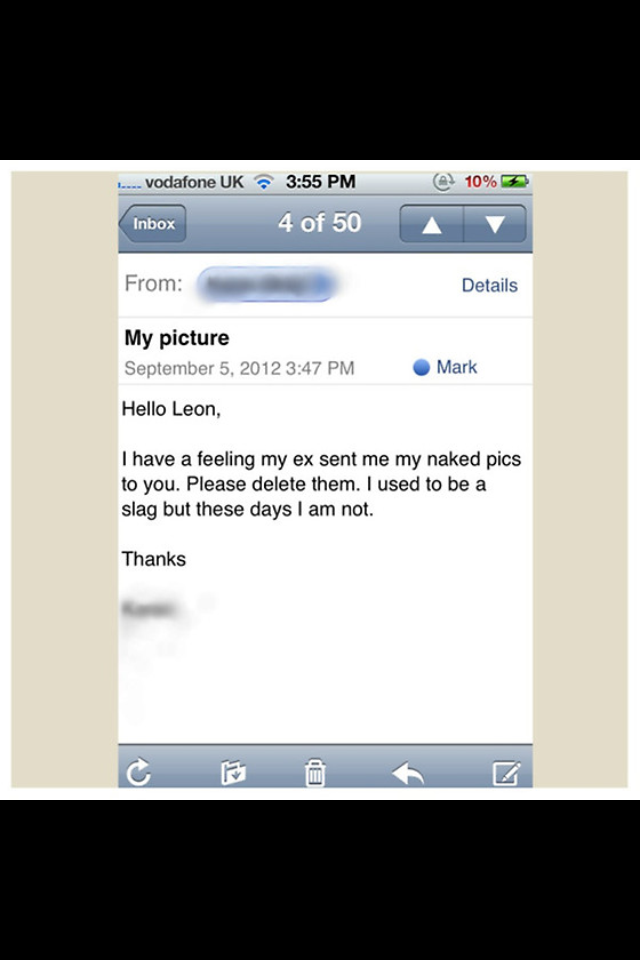 Then he published an image of a chalk board with the Twitter handles of the women he planned to target. Clearly, a fair proportion of his 102,000 fans then got in touch with the women to taunt them about their upcoming public vilification, because you see messages like this: 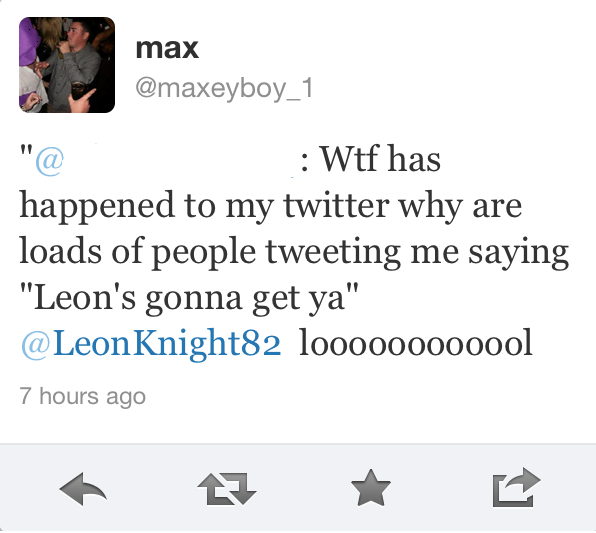 Not everyone was cowed, though: 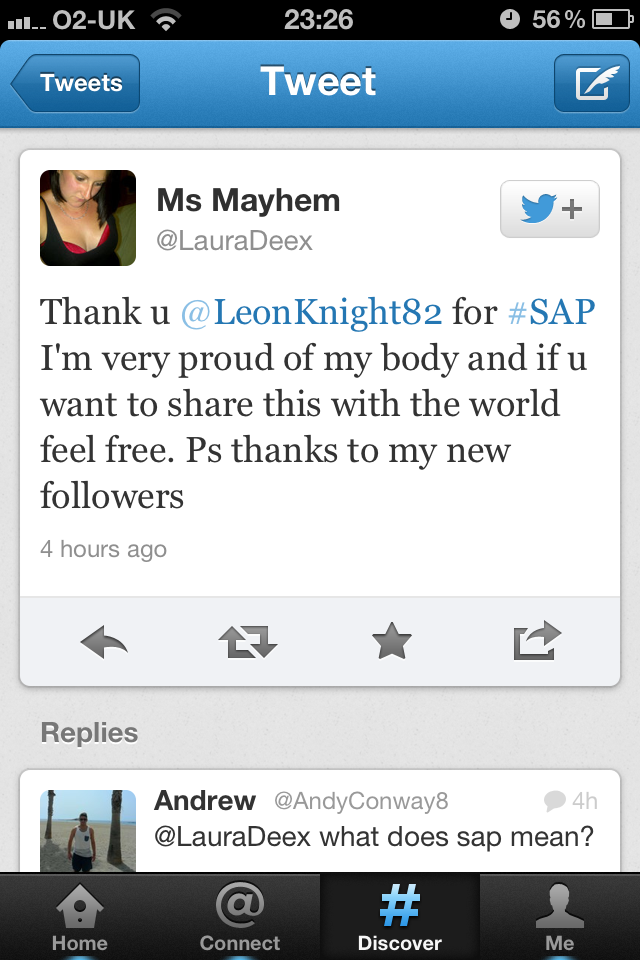 Rather heartwarmingly, one of the targeted women’s timeline simply contained “thank you” after “thank you”, as she showed her gratitude to all the people who’d got in touch to say how horrific they found the whole idea.

That angered Leon Knight, who started tweeting that he was going to “ruin her whole life”. (I’ve blanked out her name.) 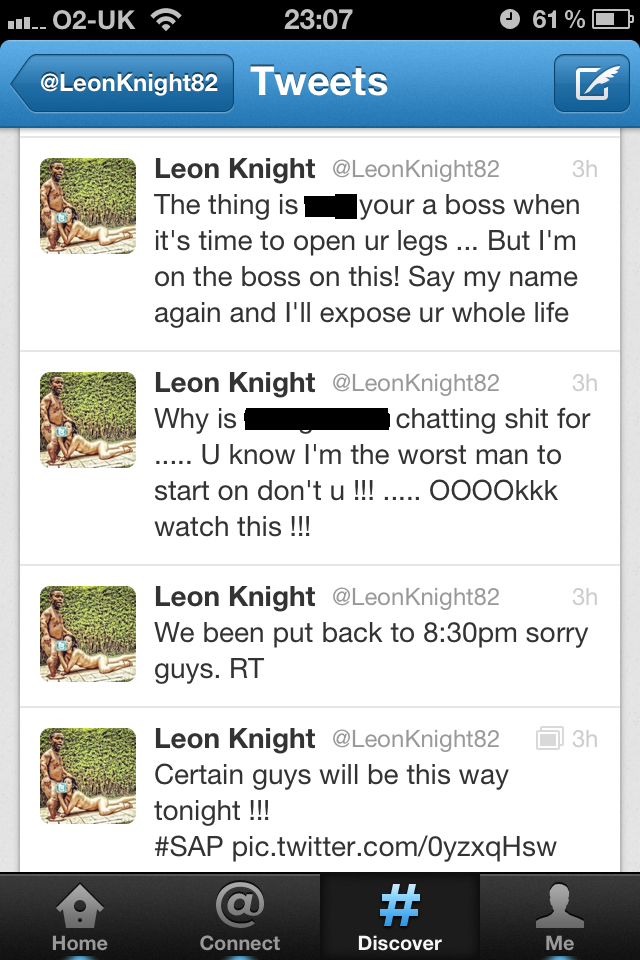 Tragically, nothing was going to stop Leon Knight. I missed his initial flurry of tweets, and by the time that I checked, the photos he’d posted had disappeared. Here he claims that “Twitter” had deleted them. 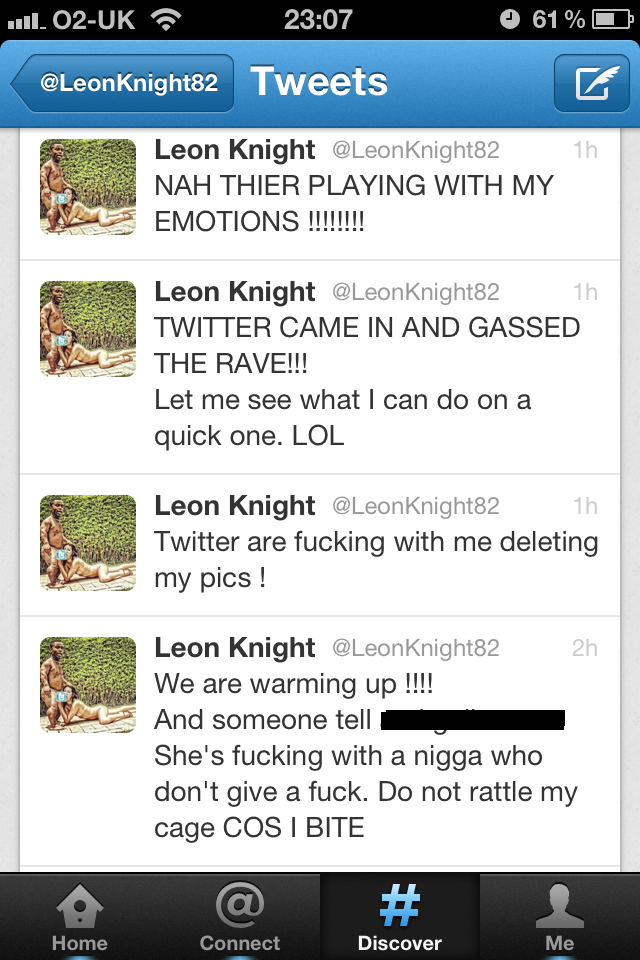 By the end of the evening, one of the women said that she was receiving death threats and tweeted a photo of herself apparently in a police station, where she claimed to be reporting the crime. (I’ve been unable to find any credible report of Knight’s arrest, although the rumour has been swirling on blogs and social networking sites). Another one of the Twitter handles from Knight’s “blackboard of shame” appeared to show that the account had been deleted.

And this morning, I checked for Leon Knight’s account and found this:

Now, I don’t think there are any grand conclusions to be drawn from this – apart from the fact that misogynists have fan clubs. It was a man who tipped me off about Knight’s latest rampage, and for every witless idiot cheering him on, there was someone else disgusted by the flagrant bullying and slut-shaming.

But it is worth recording. Because this stuff happens, and ignoring it won’t stop it happening. Staffordshire police looked into Knight’s earlier tweets to Jamie and Danielle O’Hara, and yet there he was last night, moving on to a new target. As our lives get more and more networked, those of us who use public spaces are going to have to decide how to deal with the Leon Knights of this world.

Or, as This Is My England put it:

Digital technologies: changing faster than we get get our heads around the risks which come along with the useful functionalities. So let’s be careful out there.

Update 2.30pm I’ve just contacted Staffordshire Police’s press office, who confirm that Knight was cautioned last month over the tweets to the O’Haras. But they haven’t received a new complaint.