The note, titled (ugh) “cup-o-nomics”, also attempts to quantify how strong the average English person’s desire to see their team winning Euro 2012 is. They asked how much people would be prepared to spend to guarantee an England victory; apparently the average amount is £167. That said, many English people, obviously, wouldn’t be prepared to pay anything. Sadly, ING don’t give the numbers for England, but Europe-wide, only 33 per cent of people would give money to get a victory, so it seems likely that the actual amount that people prepared to pay would give is probably two or three times the overall average.

But attitudes to money differ depending on how much of it you have. So ING also asked who’d be prepared to give 1 per cent of their income for victory, and found that it shrinks to a die-hard core of just 12 per cent of the country.

How to lead Leeds United

Does Novak Djokovic deserve any sympathy?

If you want to track down somewhere where people really don’t care, you could to worse than heading to France. That’s the only country in the competition where a majority of people – 60 per cent – don’t give a toss. ING describes it as the “laggard” of Europe, but I prefer to think of it as a glorious torchbearer, showing the path ahead. 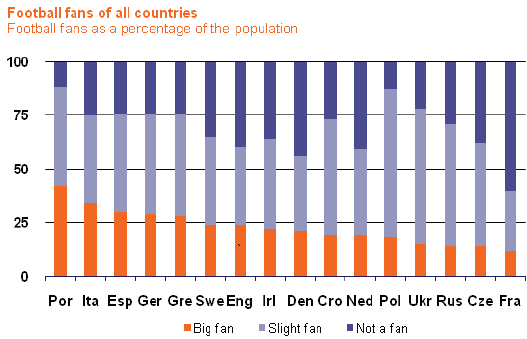