In 2014 the Venezuelan president Nicolás Maduro, a fan of John Lennon and Led Zeppelin, declared: “Our side is peace, love and tolerance.” Set against his country’s dystopian state, such words now appear darkly comic.

As Venezuela has endured an almost incomprehensible economic collapse (inflation is around 100,000 per cent; GDP has fallen by 47 per cent since 2013), Maduro has resorted to ever more repressive means to maintain control. At least 40 people have died during the recent mass protests against his government. Amnesty International has warned of the use of “intentionally lethal force” by the feared Special Action Force (an elite unit created by Maduro in 2017).

Six years after he succeeded the late Hugo Chávez as leader of the Bolivarian Republic of Venezuela – the country’s official title – Maduro is engaged in a ruthless struggle for survival. Juan Guaidó, the 35-year-old head of the national assembly, declared himself interim president on 23 January and has since been recognised by states including the US, Brazil (now led by the fascistic Jair Bolsonaro), Colombia, Canada, the UK, France and Germany. The Trump administration has imposed punitive new sanctions barring the export of oil (Venezuela has the largest proven reserves of any country). Maduro, however, crucially retains the backing of the armed forces and the financial patronage of Russia and China.

He was formally re-elected president last year with 68 per cent of the vote, but the main opposition parties (including Guaidó’s Popular Will, a sister party of the British Labour Party) boycotted the contest, which had the lowest turnout (46.1 per cent) of any in Venezuela’s democratic history. The previous year Maduro staged inaugural elections to the constituent assembly, a puppet body designed to override the opposition-led national assembly. 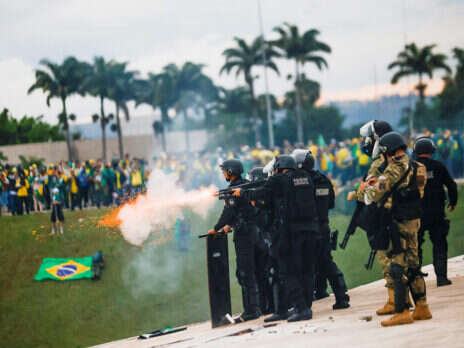 The attack on Brazil’s Congress had the aesthetics of a coup, without the danger 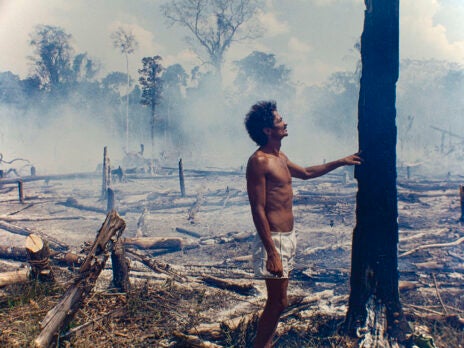 Lula’s election as Brazilian president brings hope for the Amazon

Opinion polls suggest that about 80 per cent of voters favour Maduro’s departure. Faced with his interminable rule, and chronic food and medicine shortages, some take refuge in gallows humour (three million others have simply fled). “The Maduro diet” is the epithet coined for the country’s collective emaciation (an estimated 65 per cent of Venezuelans lost an average of 11 kilograms in 2017). There are, as ever, some exceptions. Maduro has been filmed chomping on an empanada on live TV and dining at the Nusr-Et steakhouse in Istanbul, where he was served by celebrity restaurateur Nusret Gökçe (known as “Salt Bae”). For those denied such pleasantries, Maduro offered consolation at a 2016 rally. “Maduro’s diet gets you hard,” he claimed. “No need for Viagra!”

Nicolás Maduro Moros was born in 1962 in Caracas into a working-class family. Though he left high school without graduating, he was politically active as president of the students’ union and became a member of the Socialist League, travelling to Cuba for a year’s political education. He later worked as a bus driver for the Caracas Metro company (a past some opponents have snobbishly derided), where he defied anti-trade-union laws by founding an informal labour syndicate.

In the early 1990s, Maduro joined the Revolutionary Bolivarian Movement-200, the organisation established by Chávez, and campaigned for the latter’s release from prison following the defeated 1992 military coup. When Chávez was elected president six years later, Maduro became a national assembly member and later rose to become foreign minister (2006-13), a role in which he was credited with resurrecting diplomatic relations with Colombia.

After Chávez’s death from cancer in 2013, Maduro was fortunate to secure the presidency – few considered him a natural successor – but his misfortune was to do so at the moment that Venezuela’s economic model unravelled.

Between 1998 and 2012 GDP per capita more than tripled, and the country, long exploited by an entrenched oligarchy, achieved the lowest level of inequality in the region.

But its overdependence on oil – the “resource curse” that has haunted Venezuela – left it perilously exposed to a 40 per cent collapse in prices in 2014. (New Labour’s “Third Way” was an early influence on Chávez and one is reminded of Gordon Brown’s Faustian pact with the City of London.) The haphazard nationalisation of companies – with experienced managers removed – led to a sharp fall in investment and the rise of a new kleptocratic elite.

In these straitened times, Maduro frequently invoked the memory of his more charismatic forebear. During the 2013 presidential election he claimed that Chávez’s spirit visited him in the form of “a little bird”. On another occasion, Maduro compared himself to Stalin. “I am just like Stalin. The moustache is exactly the same,” he remarked in 2015.

The comparison extends beyond the merely aesthetic. Like Stalin, a party bureaucrat who assumed power after the pioneering Lenin, Maduro will be rembered not as the revolution’s saviour but as its gravedigger.

This article appears in the 06 Feb 2019 issue of the New Statesman, Broken Europe