The latest Shortlist magazine features an interview with rapper Plan B, in which he is dubbed “The Last Protest Singer”. The cover features the rapper, looking moody against a smoky city skyline – but wait, look closer.

Skrewdriver were a “white power” band, with neo-Nazi overtones and links to the National Front.

Here’s an example of some of Skrewdriver’s incredibly subtle imagery: 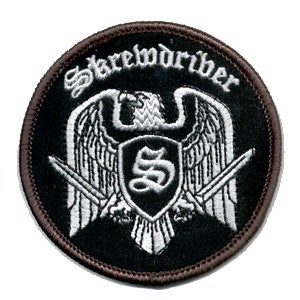 Why on earth would Plan B choose to wear the T-shirt of a band with such a history? And why would Shortlist let him?

As Brian Whelan writes on his blog on the subject:

Skrewdriver were a driving force behind the UK’s neo-Nazi skinhead scene in the 80s and early 90s. Their singer, Ian Stuart, launched the Blood and Honour movement with Nicky Crane, which to this day functions as an international network providing funds for the far-right.

It’s hard to see how the “I was doing it ironically” defence will work on this one.

Plan B has issued a statement to The Quietus, explaining the provenance of the shirt – and adding that he was unaware of the band’s unsavoury links.

“I was ignorant to the existence of the band Skrewdriver. I don’t listen to music like that so I wouldn’t know the names of bands that make that music. I was wearing a t-shirt I created using a photograph from the photographer Gavin Watson’s book Skins.

Gavin’s photos are relevant to me because they represent the demonised youth of the past. Just like my generation of young people are demonised in the media to all be hoodie wearing thugs and chavs so were the skinheads in the 80’s.

The minute I found out what the words on the t-shirt meant I was angry with myself for not questioning them. The t-shirt is not official nor is it on sale anywhere. It was of my own doing and therefore it is my mistake, but that is all it is.”

You can read the full statement at The Quietus, which said that its writers did not think “that Plan B is a racist or supports any right wing ideology. We do however reserve our right to question any political choices musicians make as part of their public career.”

Images of the cover have now been removed from the Shortlist website.