What would happen if you stuck a bunch of cameras on people staying awake for seven whole nights? It’s not a question that really needs asking or answering. But answer it Channel 4 did, with a week-long 2004 reality series called Shattered.

It billed itself as a ground-breaking “scientific experiment” to see how long anyone could last without sleep. But the set-up was pure game show.

Ten contestants were made to stay awake for a week on a purpose-built house in London’s Docklands, and given challenges under the ever-watchful eye of the producers and public. The worst performer was booted off each night, until the winning person won £100,000 in a final challenge. If anyone closed their eyes for more than ten seconds, £1,000 was taken away from the prize pot.

It’s kicked off with a Clockwork Orange-style montage detailing the deadly dangers of sleep loss – including scenes of a rail crash and placard reading “Sleep deprivation has been used as torture” – before the camera pans back to ringmaster Dermot O’Leary to introduce the contestants. 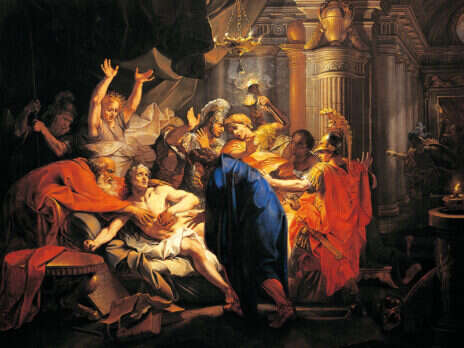 Ta-da, ladies and gentlemen, and welcome to the circus!

At best Shattered is silly. Alongside cognitive performance tests to decide the worst performers, contestants were made to do daily “Snooze you Lose” challenges. Among the surreal attempts to get them to nod off were orders to cuddle a teddy bear, watch paint dry and listen to an algebra lecture.

But at worst it seems sadistic. For the very first episode, sleepless contestants were made to peel hundreds of potatoes in silence under the supervision of a shouting, burly man. Something in the interaction provokes a visceral gut reaction: a simple sense of wrongness. It’s a feeling which stays with you as you go through the series watching participants get agitated from the lack of sleep. (I’m later told that the mock supervisor was genuinely a lovely person.)

It’s this tone that made it controversial even in an era that embraced voyeurism as entertainment. The regulator Ofcom received a flurry of complaints by counsellors for the show’s demeaning nature. “We had to examine how far the producers could be allowed to torture their participants in the name of entertainment,” wrote Trisha McNair from the series’ advisory panel in the Guardian.

Yet Shattered’s winner, Clare Farah, and runner-up, Chris Wandel, don’t recognise the damning characterisation. They both say Shattered was just another endurance test. Some people run marathons. Some climb mountains. Some go without sleep for a week in an absurdist science experiment broadcast on national telly.

“We all knew what we were getting ourselves in for,” says Farah, who runs a company advising people on adventure travel. Sometimes, concedes Wandel, “you felt like your life was going to end”. But most of the time it was “just having fun” he tells me. They both stress that they were looked after by the show’s medical staff and were free to leave at any time.

The difference is that other endurance activities don’t cause intense hallucinations in front of millions of viewers. Wandel, now 36, began to see things: objects warped in front of him, flashing shadows appeared out of the ground, non-existent projectiles would fly past his head.

Viewers watched as he began to insist that he was the Australian prime minister acting on the set of Neighbours. He laughs it off: “That was a 97th funniest moment in TV! According to ITV, they replayed it a few times.”

Where then does entertainment cross over into unacceptable territory? If sleep loss to the point of delusion was fit to air, what isn’t? The production company Endemol initially suggested putting electric shocks on the loos of the “lab” and a public voting system for punishments. They were talked out of it by the advisory panel and Wandel and Farah blanch at the suggestions.

“That’d be terrible,” says Wandel, who now works as an independent film actor. “We had agency in the situation. Electric shocks would’ve taken the challenge away from us.”

Not that discomfort was necessarily the red line. Pain was an effective weapon in staving off sleep, Wandel explains – and Farah figured out that giving yourself foot cramps was an effective tool to stay awake.

The final was a “Sleep Off” – contestants were sent to bed after not sleeping for seven nights (except two medically ordered naps, lasting only an hour each). The last to drop off won the £97,000 cash prize.

Farah managed to keep her eyelids open because she desperately needed the toilet. “I was going to wet myself,” she laughs. Wandel thinks this was effectively cheating. I don’t raise the accusation with Farah.

They hint to me in our phone conversations that they would draw the line at psychological manipulation. “The producers would do little sneaky things to make us think we were losing the plot,” says Farah.

In one episode, a fireman who stayed awake for days is brought in to talk to them about battling sleep deprivation. He was really a magician playing tricks on them to make them think they were seeing things. “But I wouldn’t say it was cruel. If they’d done something to emotionally wind us up, that would be pretty harsh,” she adds.

Love Island crosses that line, they say. “Love Island is worse,” argues Farah. She’s not a reality TV fan – despite being a winner of a reality TV series – and hasn’t seen it. “But don’t they purposefully try and break people up?” she asks me. “Psychologically that’s messed up, that’s more torturous.”

Wandel echoes this: “Love Island is full of emotional turmoil and playing tricks – I’d never do that!”

Anyone who watched Love Island’s Dani sobbing on camera as she was shown a misleading video of boyfriend Jack talking to his ex will probably admit it’s a fair point.

It’s not surprising then that they would go through the sleepless ordeal again. Wandel would have another crack at the prize if offered under what he calls fair conditions. Farah, now 34, goes further. She wasn’t in it for the money (which she spent on a house), she says, but because she’s been interested in the effects of sleep deprivation since studying it at school.

“I’d actually do it again, but I’d say that I want to stay up for longer and I’d like it to be a lot more scientific.”

Shattered still seems to me as an outsider like a distillation of the worst impulse in noughties TV: the obsession with the spectacle of another’s misery. But 14 years on, contestants Farah and Wandel argue Shattered never broke the crucial barrier into emotional torment. An ingredient that remains a key element of reality TV today.