One afternoon in about the year 1988, an 11-year-old boy was eating at McDonald’s with his family in the city of Manchester, New Hampshire. During the meal, he noticed a plaque on the wall bearing a man’s face and declaring him the founder of McDonald’s. These plaques were prevalent in McDonald’s restaurants across the US at the time. The face – gleaming with pride – belonged to Ray Kroc, a businessman and former travelling salesman long hailed as the creator of the fast food franchise. But this wasn’t the man the young boy munching on fries expected to see. That man was in the restaurant alongside him. “I looked at my grandfather and said, ‘But I thought you were the founder?’” he recalls. “And that’s when, in the late Eighties, early Nineties, my grandfather went back on the [McDonald’s] Corporation to set the history straight.”

Jason McDonald French, now a 40-year-old registered nurse with four children, is the grandson of Dick McDonald – the real founder of McDonald’s. When he turned to his grandfather as a confused child all those years ago, he spurred him on to correct decades of misinformation about the mysterious McDonald’s history. A story now being brought to mainstream attention by a new film, The Founder.

“They [McDonald’s Corporation] seemed to forget where the name actually did come from,” says McDonald French, speaking on the phone from his home just outside Springfield, Massachusetts.

His grandfather Dick was one half of the McDonald brothers, an entrepreneurial duo of restaurateurs who started out with a standard drive-in hotdog stand in California, 1937.

Their father worked in a shoe factory in New Hampshire, and both parents were Irish immigrants. Dick and his brother made their success from scratch. They founded a unique burger restaurant in San Bernardino, around 50 miles east of where they had been flogging hotdogs. It would become the first McDonald’s restaurant.

Most takeout restaurants back then were drive-ins, where you would park, order food from your car, and wait for a “carhop” server to bring you your meal on a plate, with cutlery. The McDonald brothers noticed that this was a slow, disorganised process with pointless costly overheads.

So they invented fast food.

In 1948, they built what came to be known as the “speedy system” for a fast food kitchen from scratch. Dick was the inventor out of the two brothers – as well as the bespoke kitchen design, he came up with both the iconic giant yellow “M” and its nickname, the “Golden Arches”.

“My grandfather was an innovator, a man ahead of his time,” McDonald French tells me. “For someone who was [only] high school-educated to come up with the ideas and have the foresight to see where the food service business was going, is pretty remarkable.” 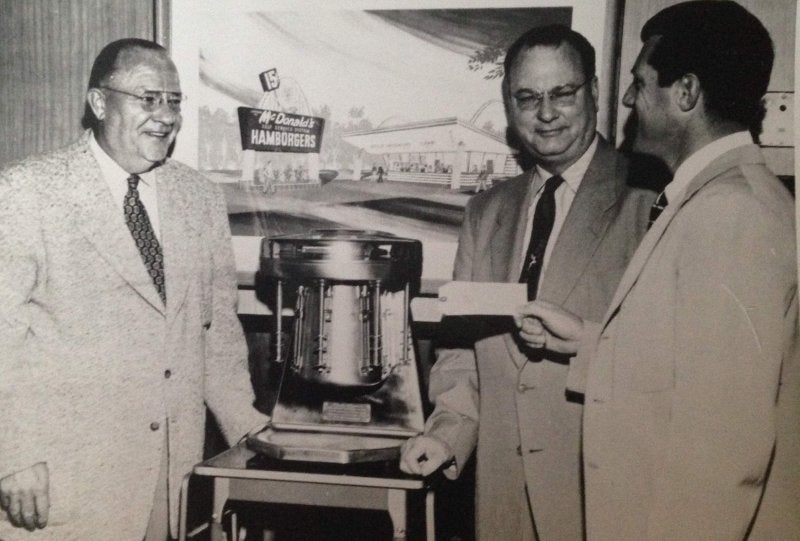 The McDonald brothers with a milkshake machine.

McDonald French is still amazed at his grandfather’s contraptions. “He was inventing machines to do this automated system, just off-the-cuff,” he recalls. “They were using heat lamps to keep food warm beforehand, before anyone had ever thought of such a thing. They customised their grills to whip the grease away to cook the burgers more efficiently. It was six-feet-long, which was just unheard of.”

Dick even custom-made ketchup and mustard dispensers – like metal fireplace bellows – to speed up the process of garnishing each burger. The brothers’ system, which also cut out waiting staff and the cost of buying and washing crockery and cutlery, brought customers hamburgers from grill to counter in 30 seconds. 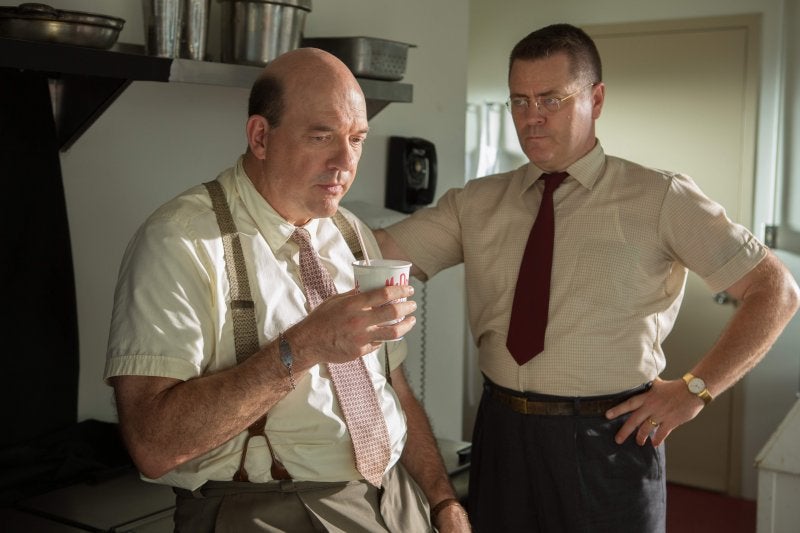 McDonald French recounts a story of the McDonald brothers working late into the night, drafting and redrafting a blueprint for the perfect speedy kitchen in chalk on their tennis court for hours. By 3am, when they finally had it all mapped out, they went to bed – deciding to put it all to paper the next day. The dry, desert climate of San Bernardino meant it hadn’t rained in months.

“And, of course, it rained that night in San Bernardino – washed it all away. And they had to redo it all over again,” chuckles McDonald French.

In another hiccup when starting out, a swarm of flies attracted by the light descended on an evening event they put on to drum up interest in their restaurant, driving customers away. An original McDonald’s restaurant, as depicted in The Founder. Photo: The Founder

These turned out to be the least of their setbacks. As depicted in painful detail in John Lee Hancock’s film, Ray Kroc – then a milkshake machine salesman – took interest in their restaurant after they purchased six of his “multi-mixers”. It was then that the three men drew up a fateful contract. This signed Kroc as the franchising agent for McDonald’s, who was tasked with rolling out other McDonald’s restaurants (the McDonalds already had a handful of restaurants in their franchise).

Kroc soon became frustrated at having little influence. He was bound by the McDonalds’ inflexibility and stubborn standards (they wouldn’t allow him to cut costs by purchasing powdered milkshake, for example). The film also suggests he was fed up with the lack of money he was making from the deal. In the end, he wriggled his way around the contract by setting up the property company “McDonald’s Corporation” and buying up the land on which the franchises were built. Kroc ended up buying McDonald’s in 1961, for $2.7m. He gave the brothers $1m each and agreeing to an annual royalty of half a per cent, which the McDonald family says they never received.

“My father told us about the handshake deal [for a stake in the company] and how Kroc had gone back on his word. That was very upsetting to my grandfather, and he never publicly spoke about it,” McDonald French says. “It’s probably billions of dollars. But if my grandfather was never upset about it enough to go after the Corporation, why would we?”

They lost the rights to their own name, and had to rebrand their original restaurant “The Big M”. It was soon put out of business by a McDonald’s that sprang up close by. Soon after that meal when the 11-year-old Jason saw Kroc smiling down from the plaque for the first time, he learned the true story of what had happened to his grandfather. “It’s upsetting to hear that your family member was kind of duped,” he says. “But my grandfather always had a great respect for the McDonald’s Corporation as a whole. He never badmouthed the Corporation publicly, because he just wasn’t that type of man.”

Today, McDonalds’ corporate website acknowledges the McDonalds brothers as the founders of the original restaurant, and credits Kroc with expanding the franchise. The McDonald’s Corporation was not involved with the making of The Founder, which outlines this story. I have contacted it for a response to this story, but it does not wish to comment.

Dick McDonald’s principles jar with the modern connotations of McDonald’s – now a garish symbol of global capitalism. The film shows Dick’s attention to the quality of the food, and commitment to ethics. In one scene, he refuses a lucrative deal to advertise Coca Cola in stores. “It’s a concept that goes beyond our core beliefs,” he rants. “It’s distasteful . . . crass commercialism.”

Kroc, enraged, curses going into business with “a beatnik”. Dick’s grandson agrees that McDonald’s has strayed from his family’s values. He talks of his grandfather’s generosity and desire to share his wealth – the McDonald brothers gave their restaurant to its employees, and when Dick returned to New Hampshire after the sale, he used some of the money to buy new Cadillacs with air conditioning for his old friends back home.

“[McDonald’s] is definitely a symbol of capitalism, and it definitely sometimes has a negative connotation in society,” McDonald French says. “If it was still under what my grandfather had started, I imagine it would be more like In’N’Out Burger [a fast food chain in the US known for its ethical standards] is now, where they pay their employees very well, where they stick to the simple menu and the quality.”

He adds: “I don’t think it would’ve ever blossomed into this, doing salads and everything else. It would’ve stayed simple, had quality products that were great all the time.

“I believe that he [my grandfather] wasn’t too unhappy that he wasn’t involved with it anymore.” Despite his history, Dick still took his children and grandchildren to eat at McDonald’s together – “all the time” – as does Jason McDonald French with his own children now. He’s a cheeseburger enthusiast, while his seven-year-old youngest child loves the chicken nuggets. But there was always a supersize elephant in the room.

“My grandfather never really spoke of Ray Kroc,” he says. “That was always kind of a touchy subject. It wasn’t until years later that my father told us about how Kroc was not a very nice man. And it was the only one time I ever remember my grandfather talking about Kroc, when he said: ‘Boy, that guy really got me.’”

The Founder is in UK cinemas from today.