As I heard it, Beryl Reid was visiting a friend performing at the National Theatre. The visit over, she said her goodbyes, picked up her shopping bags and headed for the stage-door exit. A few turns down similar-looking backstage corridors later, she found herself standing in the middle of a crowd scene in Julius Caesar. Like something out of a terrible dream, there she was, shopping in hand, a full house across the footlights and Brutus in full flow before her! Rather than recoiling or freezing in horror, the late and truly great Beryl Reid set her shopping down and confidently took her place among the toga-clad Roman crowd. When Brutus was finished, she picked up her bags, left the stage with the rest of the crowd and continued out of the theatre to get her bus.

I have been thinking about this story all week, partly because I’ve been wandering those same corridors of the National Theatre in preparation for the opening night of Under Milk Wood this week. I’m performing as part of the company reopening the Olivier Theatre after the Covid closure, which has been devastating for the industry. It’s been clear how much it means to everyone at the National to have actors and crew back making live theatre again. I’ll never forget the emotional welcome the National’s artistic director, Rufus Norris, gave on our first morning in the rehearsal room. As we all sat in marked-out squares of floor space, with masks on and two-metre-measuring buzzers around our necks, it was obvious how much it had taken to get us all to this point.

[See also: How I learned to love the Rolling Stones]

And here we are about to actually open. I’ve learnt a lot of lines in my life, but I’ve never had to learn anything like this. Dylan Thomas wrote it, for himself to perform, as a “play for voices”, so able to be performed with the script in hand: as indeed Richard Burton, probably the most famous inhabitant of the role of First Voice, did in his legendary 1954 radio recording. There have been times when I’ve thought it was going to be impossible to remember it all and wanted to run away. Many long passages are like a series of the most brain-addling tongue twisters. One word out of place and the whole thing comes crashing down. No pressure, then. I wander the empty corridors of the theatre endlessly whispering speeches to myself, like an actor carrying shopping bags looking for a way out.

First Aid Kit: “We realised constant touring was not a good way to live”

Beryl Reid was part of the generation of actors who experienced and benefited from the revolution in storytelling that began in this country in the Fifties. Plays such as Look Back in Anger and A Taste of Honey and films like Room at the Top and Saturday Night and Sunday Morning exploded into British popular culture and meant that the experiences and voices of the working class were no longer on the periphery. For the first time, people from all across our society participated in our national conversation.

Coming from a traditional working-class, south-Wales community myself, it is highly unlikely I could have had the sort of career I’ve been able to enjoy without that shift. I’ve watched as my own pathway has effectively disappeared behind me and things that I had taken for granted about our culture changed before my eyes. Low-paid or unpaid internships, the casualisation of media jobs and an increasingly London-centric industry are a few of the reasons why there can be simply too many barriers for those from lower-income backgrounds to get into journalism and the creative sector.

Combined with the burdens placed on those with caring responsibilities, or on those dealing with physical or mental health issues themselves, this means a huge proportion of people in our society are in danger of having their voices shut out again. This week I’ve launched a project begun almost a year ago called “A Writing Chance”. Its aim is to find and support aspiring writers and journalists from under-represented and lower-income backgrounds. We now have our 11 finalists, who will get one-on-one mentoring from leading industry figures, a £1,500 bursary each, insight days and access events with our media partners including the New Statesman and the Daily Mirror, and their work published or broadcast on national platforms. They are an amazing group of writers with extraordinarily diverse voices and experiences, and the project has already exceeded all my original hopes. It makes me incredibly excited about not only what our first 11 will go on to do but all the other talent still to be discovered.

Riding to the theatre on my bike I see people gathering for an anti-vaccination and anti-lockdown demonstration in front of parliament. I’m struck by how many Union Jack flags there are, and at the traffic lights I wonder about the different branches of patriotism that seem to exist. The one on display here appears to be based around the protection of personal freedoms at any cost, a fury against restriction and inconvenience, and a total mistrust of institutions. I very much sympathise with the concerns about lost jobs, lost incomes and whole sectors suffering, and hope that the patriotism here extends, once all restrictions are lifted, to helping our fellow countrymen and women who are going through tough times.

But this cause seems to have a less convincing claim to a flag-flying pride than one that is based on common sacrifice for the greater good, a shared sense of collective responsibility and the determination to adapt and respond with resilience and fortitude in the most challenging of circumstances. As the lights change I head off over Westminster Bridge, in a totally inappropriate gear, and with an image of Beryl, headscarf fixed, shopping in one hand, and a majestically fluttering Union Jack held defiantly aloft in the other.

To learn more about A Writing Chance, visit awritingchance.co.uk 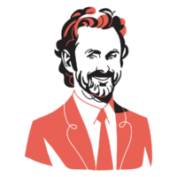 Michael Sheen is a Welsh actor and activist, best known for his performances in The Queen, Frost/Nixon and Good Omens. He has played the role of Tony Blair three times, and is the guest editor of the 25 March 2022 edition of the New Statesman.