On 15 September 2008, Wall Street’s oldest investment bank filed for bankruptcy, sending shock waves through the world’s financial markets. Leh­man Brothers was not “too big to fail” ­after all. Its collapse heralded the main, most perilous phase of the global financial crisis – and it seemed to have exposed the limits of right-wing orthodoxy and unbridled free-market capitalism. Indeed, Ed Miliband was spurred to run for the Labour leadership by a belief that politics had shifted to the left after the crash.

Yet, seven years on from Lehman’s implosion, right-wing parties are thriving. In the UK the Conservative Party won a majority in May for the first time in 23 years. Across 39 countries in Europe that we analysed parties of the right are in government in 26 of them. Add in the Anglosphere – Australia, Canada, New Zealand and the United States – and right-wing parties control the legislature in 30 of the 43 countries. This is four more than before the crash.

Why is this? One big factor is that the centre left has not been able to answer the question of what it exists for when there is no money left. As management of the economy has become a much more important issue, right-wing parties have benefited because they “are often labelled better economic managers”, says Andrew Little, leader of the New Zealand Labour Party. Thomas Hofer, an Austrian political consultant, says: “In times of crises, conservatives might be trusted more, as they are seen to keep an eye on a balanced budget. When there’s growth, social democrats are – or were – trusted to spread the wealth.”

Relentlessly, and often misleadingly, parties of the right, including the Tories, have drummed home this message of superior economic competency. “The PR of the centre right is unbeatable,” says André Krouwel, a lecturer in political science at VU University Amsterdam, even though “empirical evidence shows that left-wing governments or coalitions actually perform better and cause much less deep crises”.

The crash has also damaged the left by making voters more insular and defensive, especially towards immigration. Parties of the centre right, meanwhile, “have always been more associated with a rather tougher line on immigration” and so “are likely to do better at elections where it’s up in the mix”, says the Conservative Party historian Tim Bale. The populist right has been the biggest beneficiary of this shift, attracting working-class people who once voted for left-wing parties but now fear immigration is threatening their livelihoods. The Ukip leader, Nigel Farage, told the NS last year: “Everybody thought that people’s tribal allegiance to Labour was as strong, if not stronger, than the tribal allegiance to the Conservative Party. What we’re actually finding is, they don’t even recognise the tribe.”

Ukip has been stymied by the British voting system, but parties of the radical right elsewhere in Europe often benefit from proportional representation. Ultimately this helps the mainstream right, too: as voters shift from parties of the left to the radical right, “It makes right-wing majorities and coalition formation easier,” Krouwel says.

In some countries leaders of populist-right parties have portrayed themselves as the protectors of a welfare state under attack from liberal immigration policies. The Danish People’s Party, for instance, has branded itself as “representing classical social-democratic values combined with a tough line on immigration”, says Klaus Petersen, a professor at the University of Southern Denmark. He believes that the failure of centre-left parties to acknowledge and help those people negatively affected by the forces of globalisation and immigration has been a big mistake. The consequences are clear in the Nordic countries, historically the fiefdom of social democracy. Right-wing parties today control Denmark, Finland, Iceland and Norway, leaving only Sweden in the hands of the centre left. 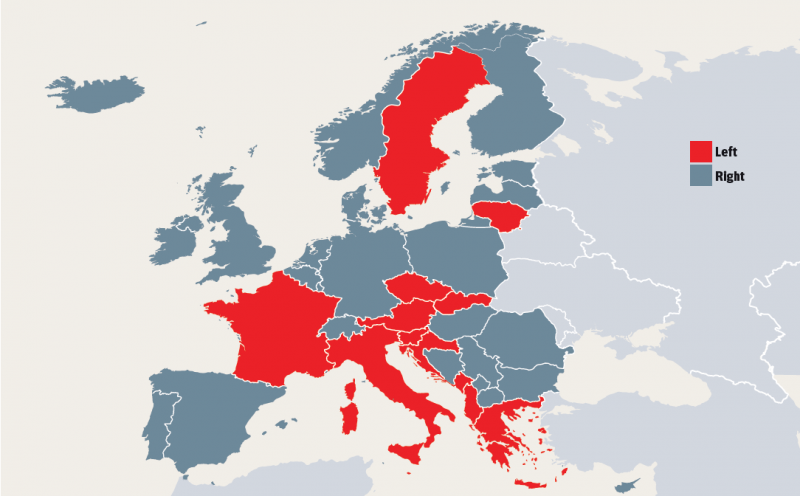 Only southern Europe provides much solace for the left. Syriza holds power in Greece but it is only in Italy, largely as a result of Silvio Berlusconi’s self-destruction, that the left displays any great sense of vibrancy (see above). In the west, the Parti Socialiste holds power in France, though François Hollande’s time in office has been tumultuous.

The left is also battling against trends that pre-date 2008. The growth of “individualisation” since the 1970s is the most important structural factor in the success of the right, Krouwel says. “The idea of free and individual choice undermined the traditional drivers of left-wing thought: solidarity and state interventionism.” Right-wing parties have also been helped by the collapse of manufacturing, the decline in trade union membership and the rise in self-employment.

The best could be yet to come for the right. Across Europe and the Anglosphere populations are ageing. “[This] benefits the right, because voters shift right as they get older,” says Eric Kaufmann, professor of politics at Birkbeck College in London. The “old vote” counts even more because so few young people vote: across Europe last year, only 28 per cent of those aged 18-24 voted in the European parliamentary elections, compared to 51 per cent of those 55 and over. In addition, there is an apparent rightward shift in young people’s attitudes. In the UK research shows that the “millennial generation” has moved to the right of its parents in its attitudes to the economy and the state and its confidence in the welfare state.

So much, then, for the idea of the economic crash heralding another dawn of ­social democracy. Instead, it ushered in an age of the right.

This article appears in the 30 Sep 2015 issue of the New Statesman, The Tory tide