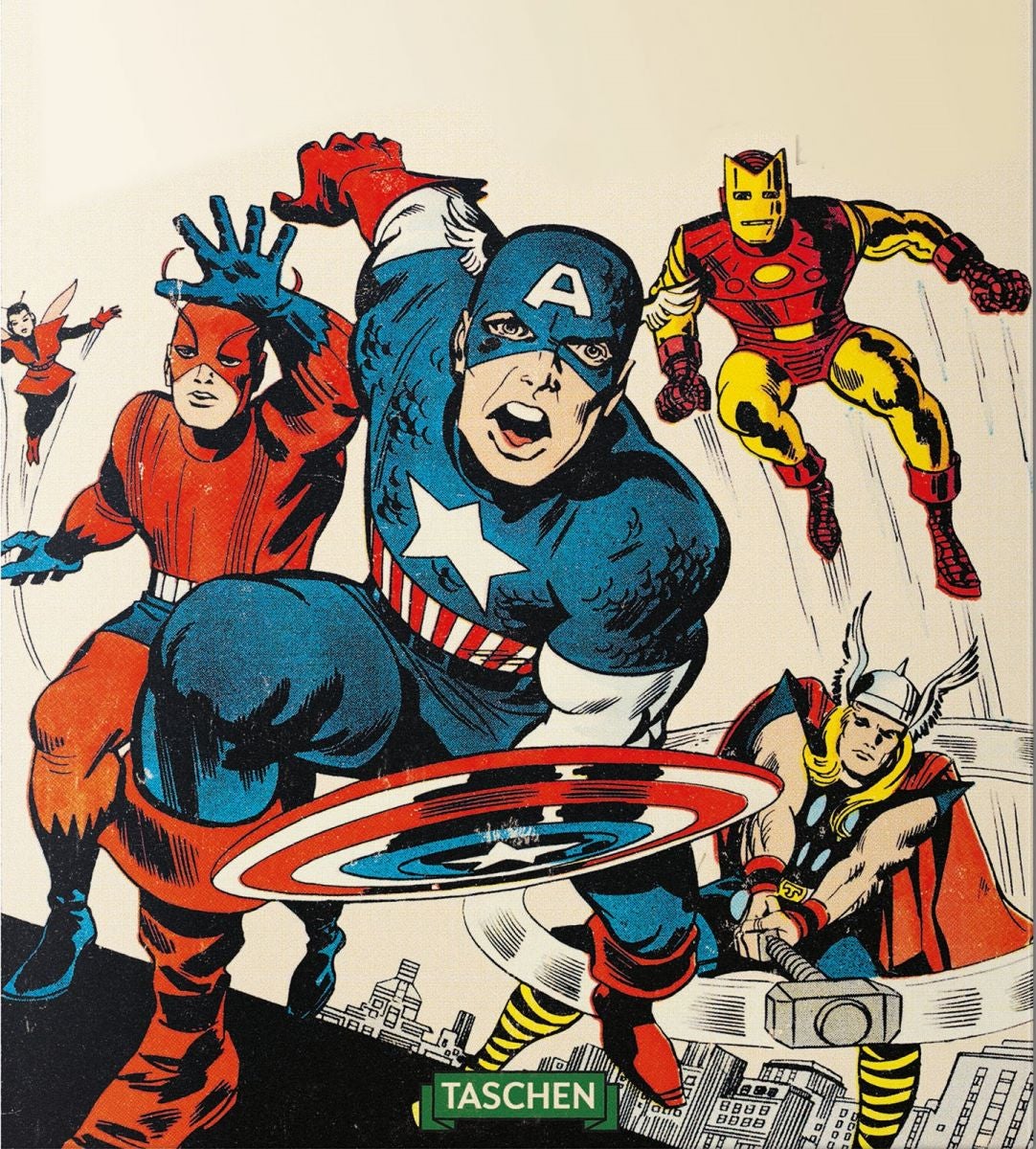 75 Years of Marvel Comics: From the Golden Age to the Silver Screen
Roy Thomas
Taschen, 722pp, £135

All the best comic books have an origin story. It tells you how the protagonist became who they are, sketching in the traumas that ultimately define what kind of hero or villain they would be. Batman saw his mum and dad gunned down in a backstreet mugging. Superman was sent hurtling through space by his devoted parents as his home planet imploded, becoming, for a time at least, the sole survivor of an entire species. The Hulk was a scientist who exposed himself to the lethal force of his own invention – the “gamma bomb” – to save a half-witted teen who had ignored the warning signs for a bet. Peter Parker, better known as Spider-Man, started out using his powers, an unwelcome gift from a radioactive bug, for personal gain. He couldn’t be bothered to stop a petty thief, thus becoming the architect of his own tragic narrative when that same crook murdered Peter’s surrogate father, Uncle Ben, forcing the young web-spinner to embark on a life of thrill-filled crime-fighting.

Here’s my origin story: skinny, short-sighted, timid kid who doesn’t play well with others and hates sport discovers a beaten-up copy of Fantastic Four number three and a pile of other early Marvel comic books in a junk shop. He buys them. Reads them. Loves them. And keeps buying, reading and loving them for the rest of his life.

Other comics were available. The British ones tended to feature stories about war and football – but who wants to read about a British Tommy or a centre-half when you could be following the adventures of the superbly athletic Daredevil, swinging across the Manhattan skyline, navigating using a radar sense that was created by the radioactive gloop that blinded him? There were DC Comics, too. DC was Marvel’s main rival and, at the time, the most successful comic book publisher on the planet. Superman and Batman were its biggest hitters, with the Flash, Green Lantern and Wonder Woman trailing behind. But for me they were too straight, tidy and dull by comparison. In the 1960s comics, Batman wasn’t the dark, brooding vigilante who had emerged in the 1940s and has more recently found favour again through the work of Denny O’Neil, Neal Adams and Frank Miller, which in turn inspired Christopher Nolan’s gloomy blockbusters. He was a barrel-
chested buffoon, the same Batman who appeared on TV with his silly, unthreatening bad guys and camp sound effects and puns.

Marvel was more streetwise and funky. When I visited both companies’ headquarters in the early 1990s, Marvel’s felt more like a college rec room than a serious business place. DC’s on the other hand, by then wholly owned by Time Warner, was a grim, unwelcoming place, with dim lighting and employees talking in hushed tones – more like a bank than an entertainment company.

So it was Marvel Comics rather than comics in general that I fell in love with and it’s the history of that billion-dollar entertainment powerhouse that Taschen honours with its latest pop-culture plinth. The book is billed as a celebration of Marvel’s 75th anniversary, an inside look not only at its celebrated characters but at the “bullpen” of artists and writers whose names are almost as familiar to fans as the protagonists they brought to life: Stan “the Man” Lee, Jack “the King” Kirby, Steve Ditko, John Romita, John Buscema, Jim Steranko, Marie Severin and many others. There are already dozens of books that cover pretty much the same ground but there are a few factors that make this the only one you’ll need to own. As you would expect from Taschen, the book is bloody enormous – “Hulk size”. Because of this, the photos and artwork, reproduced in the original size, can be experienced and enjoyed like never before. The work on show is incredible: obscure advertising and in-house material, beautiful covers, rarely seen snaps of the creators. The book succeeds in capturing the impact that the original comics had, while showing us the peculiar and peculiarly talented men (they were almost exclusively male) who laboured in this strange, somewhat denigrated corner of the entertainment industry, making masterworks that continue to fuel the business today.

The essays about the creations and their creators are written by someone who was there for almost all of the period that we fans refer to as the “Silver Age” of comics, from around 1960 to the early 1970s: Roy Thomas. He’s a comics historian who currently edits a fabulous magazine, Alter Ego, which delves into the nooks and crannies of the form’s past. He was also Marvel’s editor in chief when Stan Lee stepped away from the creative heart of the business to try, unsuccessfully at the time, to get Hollywood interested in the characters he had helped bring into the world – the same characters who now dominate the box office. Talk about being ahead of the curve.

That’s the most exciting period – the 1960s – when Marvel as we know it today truly began. But the earliest, faltering steps in the 1940s are covered in surprising and welcome depth, as well. Martin Goodman – born Moses Goodman in 1908 in Brooklyn, New York, to Lithuanian-Jewish immigrant parents – was working for a magazine distributor that went bankrupt in 1932, the worst year of the Great Depression. He and a fellow employee decided to set out on their own. Beginning as a publisher of pulps, those lurid sex-and-scandal novellas published on the cheapest of papers, Goodman swerved into comics when it looked like a profit was to be made from adding pictures to the sensational words. 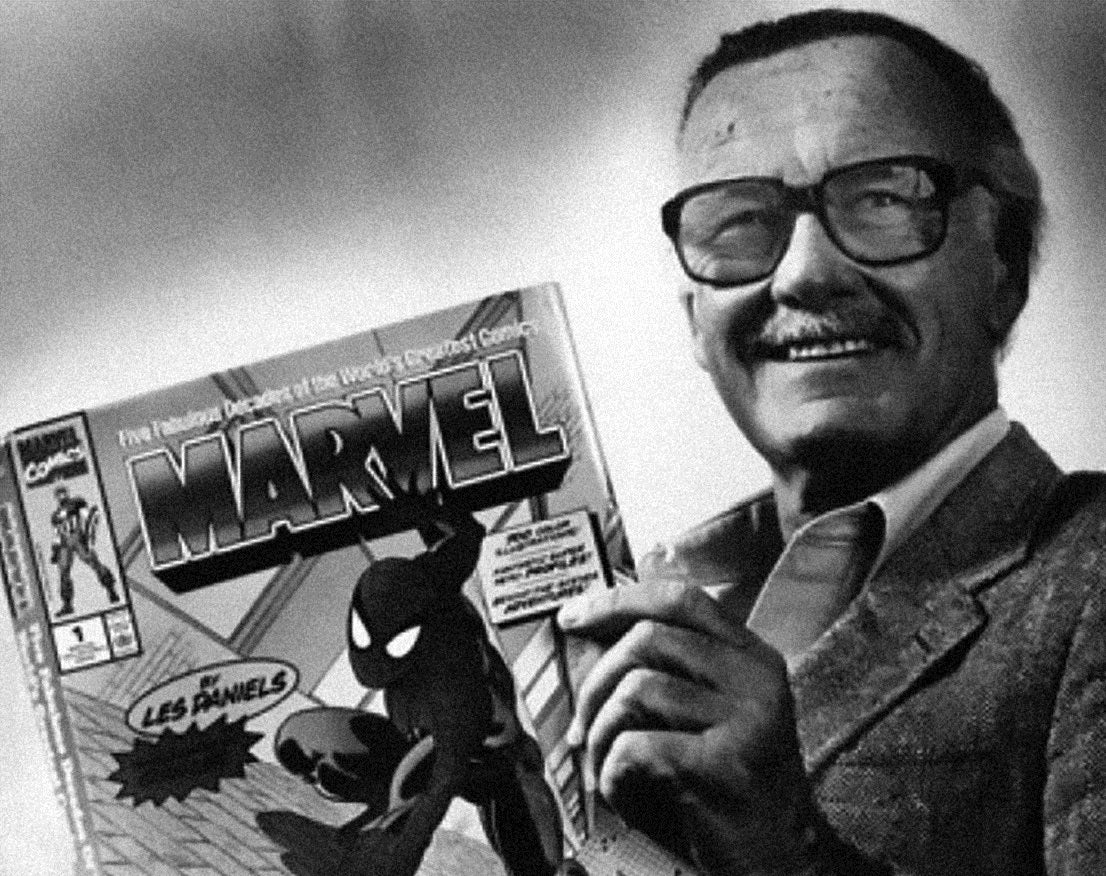 By today’s standards, the writing and the art seem impossibly crude and yet these early publications are possessed of a weird power to thrill and excite. Marvel flipped the conventional fantasy script by placing the inhuman and the invincible in the real world. With the likes of the fiery android Human Torch, the vengeful sea prince Sub-Mariner and the pipsqueak-turned-paragon Captain America, they created a mythological universe grounded in a world brimming with humour and heartache that readers recognised as close to their own.

The book then takes us through the period when the appeal of superheroes began to wane and Marvel (then known as Atlas) diversified into quirkier fare, publishing war comics such as Combat and humour books alongside horror, detective, romance and “funny animals” stories.

The 1960s were when the modern-day heroes took control and even the least interested among you will have some idea of what that means: the birth of Spider-Man and the Hulk, then the X-Men and the Avengers, characters who now make billions for the company that held on to the rights (sometimes in a dubious way).

Equally fascinating are the early and mid-1970s: the beginning of the “Bronze Age”, when younger artists and writers including Barry Windsor-Smith, Jim Starlin and Steve Gerber, who were as much influenced by modern music and drug culture as by the comic creators who had preceded them, began to produce philosophical, satirical, cosmic odysseys – books such as Warlock, Captain Marvel (the first super character to die of cancer), Omega the Unknown, Howard the Duck and the successful adaptation of Robert E Howard’s Conan the Barbarian, the rights of which were secured for Marvel by Roy Thomas himself. Working alongside the artist Windsor-Smith, he not only produced a huge-selling smash but also helped to keep Marvel in touch with its devoted fans, who were now of college age or older.

Tom Wolfe’s The Electric Kool-Aid Acid Test (1968) discusses Marvel, in particular the psychedelic creation Doctor Strange, a neurosurgeon-turned-Master of the Mystic Arts. Thomas and Wolfe corresponded and the author ended up with a cameo in which Strange greets him: “Haven’t seen you since you were just a kandy-koloured tangerine-flake streamline baby!”

Reading this history, what strikes me as remarkable is that a company as old as this, through which so many creators have passed, should have such a continuity of ideas. The development and evolution of the characters – from crude, jingoistic sketches to simple action heroes to figures capable of carrying stories of greater depth and reflection – are a tribute not only to the minds that shaped them but also the brilliant simplicity and strength of the original ideas.

The reason for Marvel’s success, I would suggest, is the same reason I fell in love with its comics and probably the same reason that it was acquired by Disney in a deal publicly announced as worth $4.24bn – the same reason that it is now the most influential and commercially valuable brand in the world of superhero comics and movies (with its attendant merchandise and lucrative spin-offs). It’s that Marvel had a specific identity, a DNA that could be found in all of the books it published.

This trademark tone was first developed in the 1940s and then neglected, before Stan Lee – the inspired, fast-talking, tirelessly self-promoting co-creator of its most successful early titles – dusted it off in the 1960s and made it work better than ever, blending each disparate character into the storyline and habitat of all the others, creating a crazily colourful and yet somehow cohesive universe. It’s a universe that has also translated smoothly on to the screen, whereas the DC characters never seem to gel: the forthcoming Batman/Superman movie and the rumoured appearance of Wonder Woman in that might help but I’m frankly pessimistic and a little depressed at the prospect.

Another thing that strikes you as you look at the art from throughout the glorious 75 years is how much less work they seemed to put into the early books – but how, despite that, they manage to be more memorable than today’s hyper-realistic, glossy pages. The early artists were also stylists; the bodies, costumes and buildings were distinctly their own. Steve Ditko’s Spider-Man and Doctor Strange could not possibly be mistaken for anyone else’s and no one can draw the Hulk or Captain America or Thor with the power and the pathos that their co-creator Jack Kirby breathed into every panel. It’s as if the characters gushed undiluted and unfiltered from the artists’ psyches – rudimentary, yes, but also scorchingly powerful, like the gods from ancient myths or
old religions.

Thomas’s book isn’t a critical history of the company: for a more in-depth, less partisan history of the industry, I recommend Men of Tomorrow: Geeks, Gangsters and the Birth of the Comic Book by Gerard Jones. But if you’re looking for a joyous celebration of the greatest (IMHO) comics company in the world, you won’t find a better or more lavish read. As the fan club members used to holler in the 1960s, “Make mine Marvel!”