Finding the right balance of interesting images, a succinct message, and a playful, non-hectoring tone for a weekly topical comic can be a delicate process.

Often, the most successful comics are the ones that articulate something in a visual way that makes it difficult for me to imagine communicating it in any other medium.

Looking over my comics from 2014, I’m encouraged that In the Frame has successfully broken away from panels of talking heads into more inventive cartooning and layouts. It’s probably no surprise that I’ve been having a lot of fun drawing them this year.

Because the format of In the Frame has steered away from a more traditional three-panel gag strip of: set-up, beat, punchline – I tend to see the comic more as a short comedy skit with an unlimited budget. Something that wouldn’t look out of place on SNL or Mr Show.

Here are some of my favourites from this year: When the word “divisive” got hauled out as the Tactful Understatement of the Year when the media marked the passing of Thatcher, that word took a bit of a beating. It also got used a lot during the week Tony Benn died. So much so that it started to lose it’s meaning. I started thinking about what happens to those forgotten, overused and/or misused expressions and this comic started to develop.

Little did I expect the word “selfie” to become quite as misappropriated as it did.

Cut Out and Dress Your Own Internet Misogynist 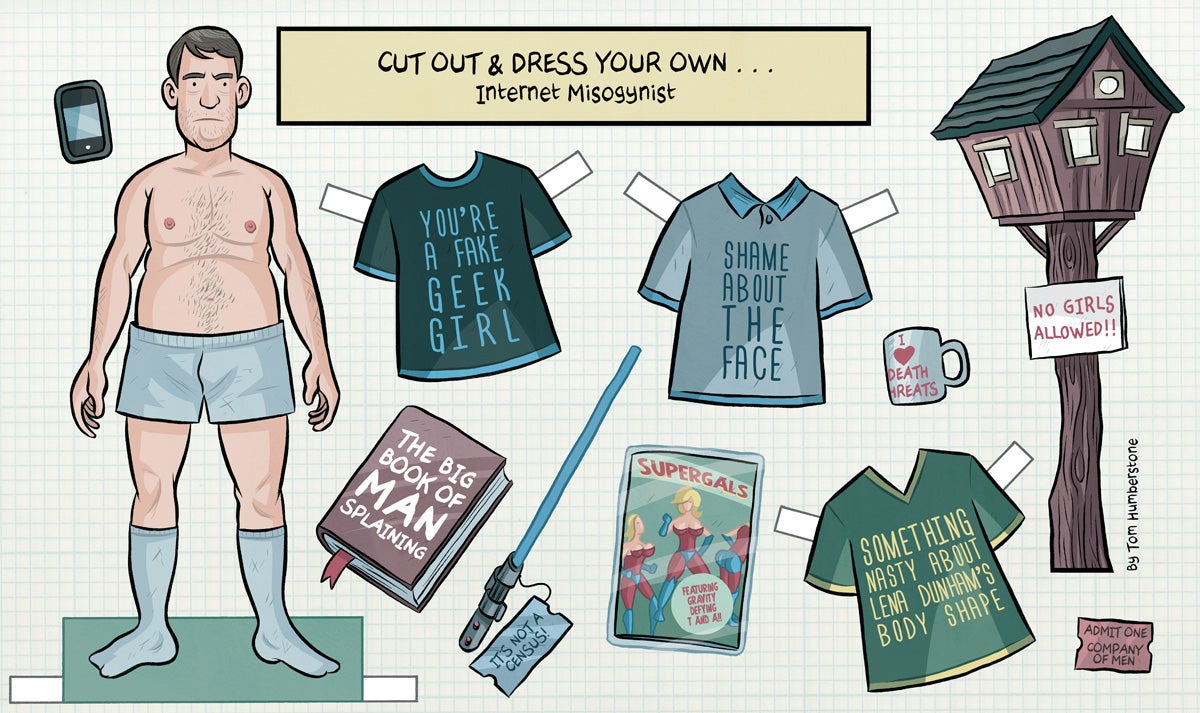 This was partly in response to the “debate” over the gender diversity in the new Star Wars films after a photo of the predominantly male cast was posted. It was also a response to the sort of online abuse women like Laurie Penny or Lena Dunham receive that other male journalists or showrunners in their position simply don’t.

But then, as we approach the end of the year and things like Gamergate have entered into mainstream consciousness, it feels like this comic could easily just sum up 2014. 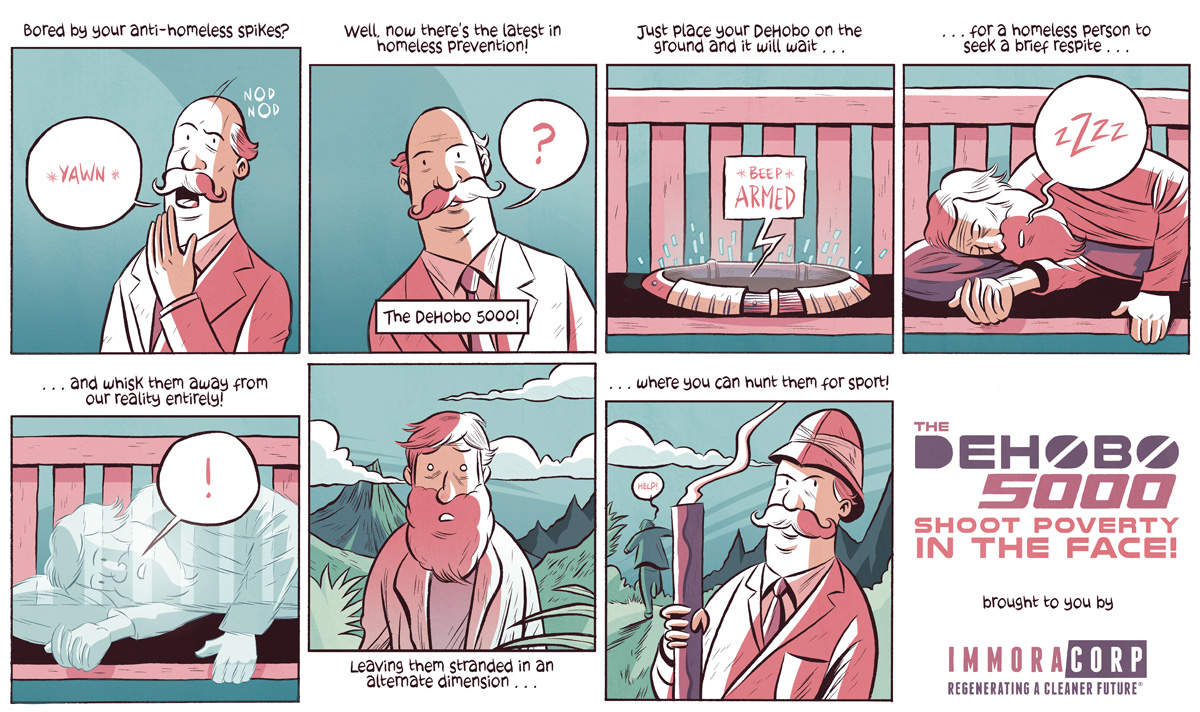 A reaction to the despicable anti-homeless spikes that appeared over the summer and the prevalence of what’s being called “hostile architecture“. We’ve got bus stops with slopes that barely prop you up, benches that are designed to prevent skateboarding or lying down, and all sorts of nasty additions to public (or what should be public) spaces.

It’s very dehumanising. And dystopian. In such a way that it allowed me to invoke those unspeakably evil corporations that featured in every 1980s sci-fi movie I saw as a child .

Haven’t I Got Satire For You 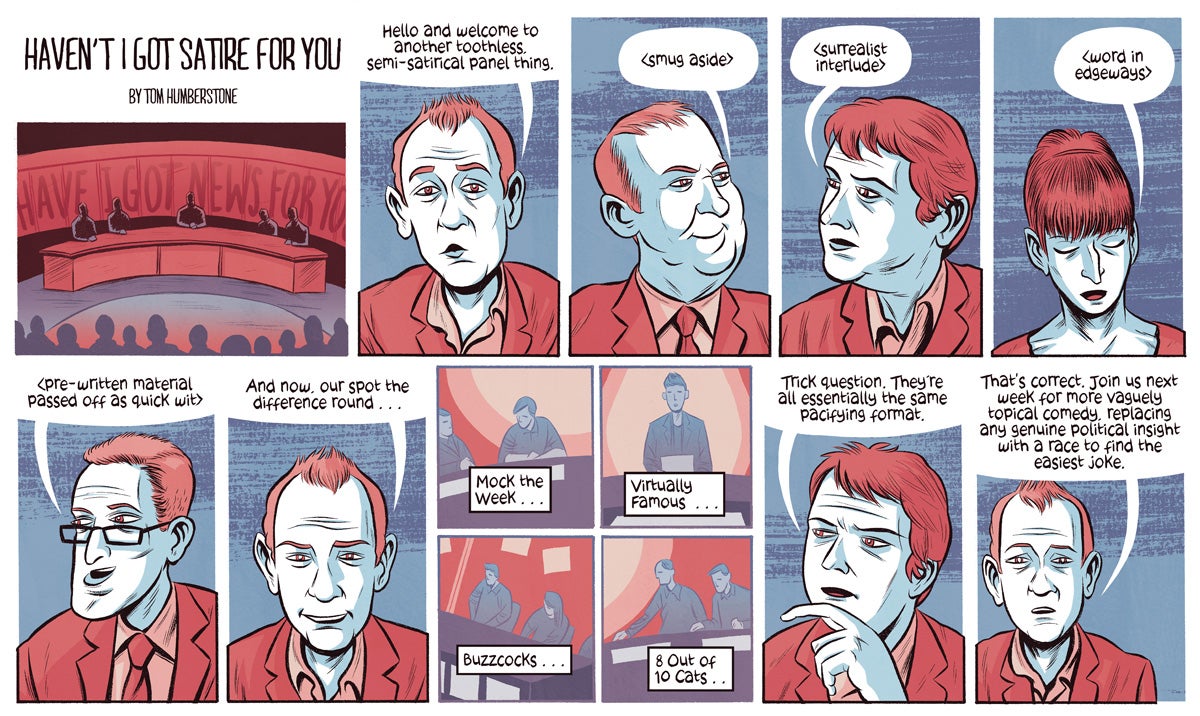 I like to watch The Daily Show, Colbert Report, and John Oliver’s Last Week Tonight. All of which are American shows and all of which satirise the news and media landscape brilliantly. Last Week Tonight in particular, with its weekly schedule, gets to deep dive into big, complicated topics – amusing and educating equally.

And while I understand these shows have American budgets and thus, a huge team of researchers, assistants and writers, I still feel completely let down by British satire in comparison. Instead, we’re offered variations on tired panel show formats. There’s a reason these don’t make the rounds on social media the day after like their American counterparts – they offer no insight or genuine passion/outrage, just pretty obvious jokes.

I’m aware I’m probably setting myself up for some pretty easy criticisms of my own work here. People in glass houses etc. 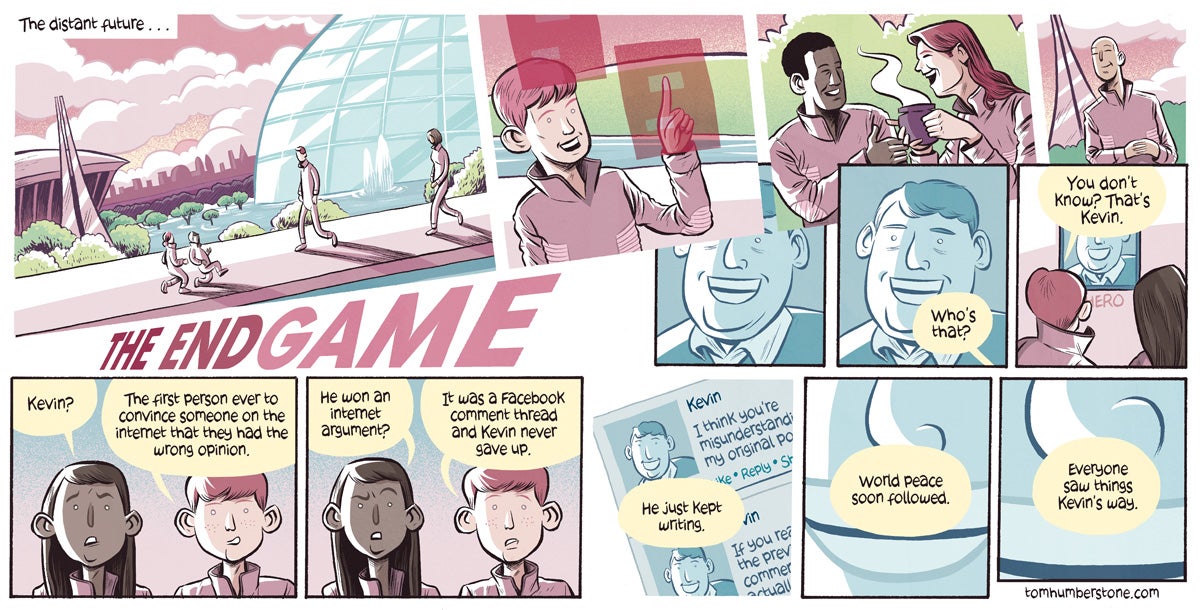 Again, a comic that I feel could comfortably represent most of 2014. I’m always a bit hesitant to have my comics comment too much on internet etiquette and online sub-cultures but sometimes a Facebook comment thread can wind one up the wrong way.

Buy Tom Humberstone’s collection of In the Frame comics from: tomhumberstonestore.bigcartel.com