One of my favourite comedy images of recent times comes from the start of Brian Pern: A Life in Rock. It’s Brian, an intent look on his face and wearing an unstructured black coat worthy of a trendy Norwegian wizard, riding a Segway through a wood in Surrey. It works because it’s exactly the kind of gadgety thing we imagine moneyed rockers to do. Brian Pern should be a familiar figure to you. He had his first series on BBC4 earlier this year and it seemed a natural fit; after all, BBC4 positively salivates over the ageing muso and Brian Pern is the ultimate. Forty years in the music biz, erstwhile lead singer of prog rock band Thotch, inventor of world music, and the first person to use plasticine in videos. Pern is, of course, a pisstake, played by Simon Day. There are no prizes for guessing that he was based on Peter Gabriel, there or thereabouts.

In the first three-part series, Pern told the Life of Rock – birth, middle age and death – in the form of a roc/doc/mockumentary. We wandered through moody 70s graphics, revelled in terrible music, re-appropriated some great old footage. It was packed with classy mis-labelled talking heads, some of them real people appearing as themselves or maybe not, some of them characters. Any confusion was purposeful. Sometimes it was hard to work out who was what was who; sometimes their names changed half way. And even if you (OK, I) knew there was a reference you weren’t quite getting the full flavour of, it didn’t matter.

That series has very quickly (in TV terms) been transferred to BBC2, and starts on 9 December for three weeks. Having done history, this time it deals with Brian’s life in rock. The format is similar – “archive”, graphics (some real, some created), talking heads, interviews. It focuses around Thotch, who consist of Pern, Tony Pebblé (pronounced Peb-lay), played by Nigel Havers, Pat Quid (Paul Whitehouse), who reckons he’s been held back by a loving supportive childhood, and silent John and Mike (Dave Cummings and Phil Pope), the “toes of the band”, where Pebblé is the prick. 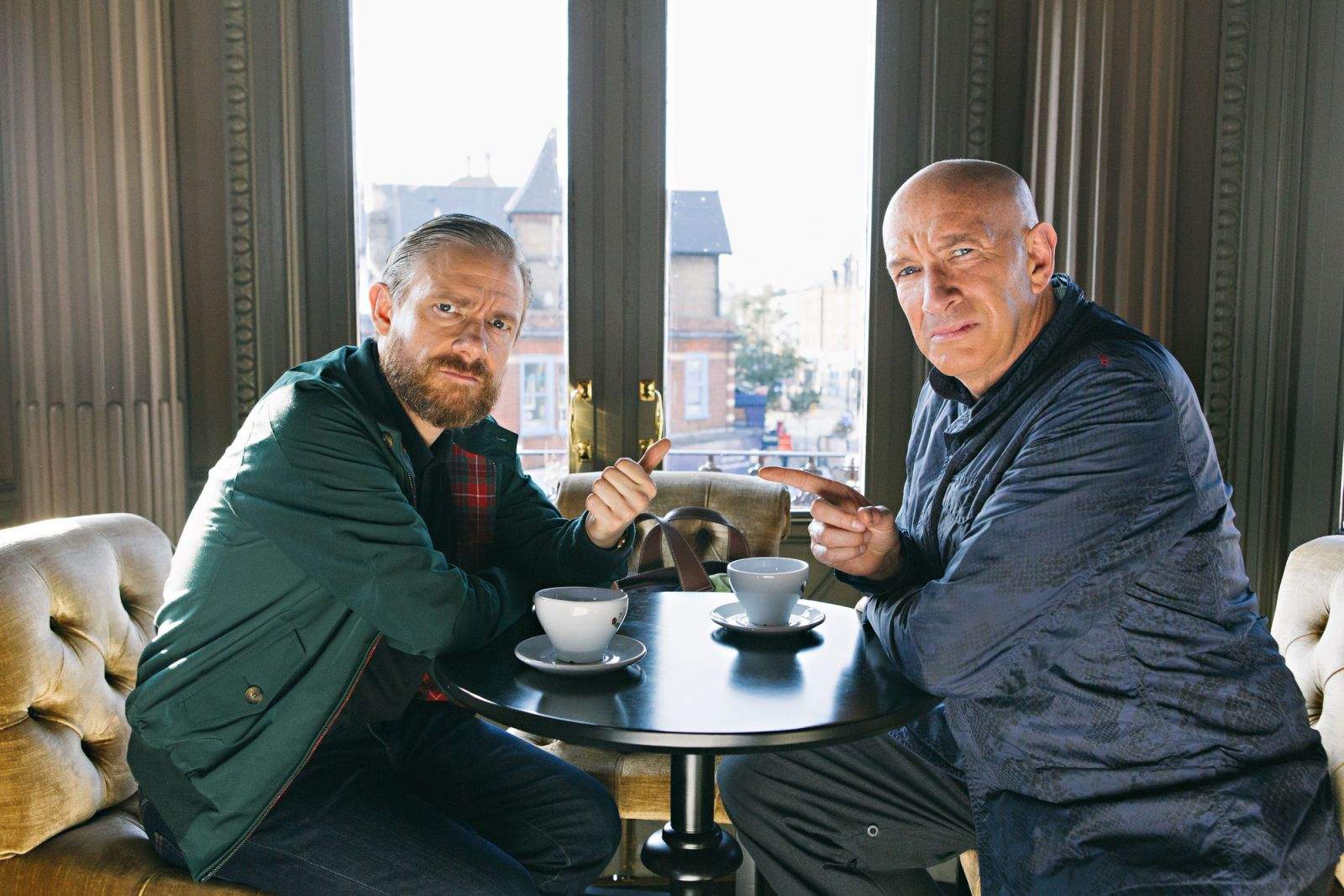 Martin Freeman as Martin Freeman and Simon Day as Brian Pern (they are discussing whether Martin should play Brian in a musical – meta).
Photo: BBC/Rory Lindsay

We’re at the beginning of a new venture for Thotch, neatly flagged up at the end of Series 1 by their proclaimed loathing of the jukebox musical. So yeah, course, they’re the subject of their own jukebox musical – Stowe Boys, written by Thotch and Tony Slattery (a peach of a reference that might send people younger than me to Google) and directed by Kathy Burke playing herself.  Kathy Burke, everyone! Brilliant. There’s flashes like that all the way through. Look – Martin Freeman! Ha – Annie Nightingale, mis-labelled as Fearne Cotton. And is that really Baz Bamigboye? I’m not saying. There’s a Pointless round in this at the very least. The occasional appearance feels like a favour called in unnecessarily. I’m a massive fan of Vic and Bob, have spent actual time arguing over the relative comic merits of nutmeg over, say, cinnamon, but Mulligan and O’Hare feels like an overplayed hand. Aside from that, it’s not arch or dry; it’s cleverly, playfully pitch-perfect.

Simon Day is, too. Looking like a cross between Yul Brynner and Dr Evil, he’s superbly blank-faced, his accent a strange hybrid of Surrey and California; like the Segway, it’s what we presume happens to real life rock legends when they spend too much time touring. Michael Kitchen is spot on too, as John Farrow, Brian’s long-term manager. Grumpy, irascible and looking like he’s reluctantly hauled himself off a Caribbean beach in crumpled linen and a blazer, he’s constantly checking various phones, telling Cameron and other liggers to fuck right off while simultaneously making terrible decisions about Brian’s career. Lucy Montgomery is a solid comic actor; she played various roles in the first series but settles in here as Pepita, Mexico’s answer to Kate Bush, her sibilants catching beautifully on her teeth.

There’s a skill to knowing how far to stretch something, and this is small but perfectly crafted. It’s packed with nuggets, not one a duffer, and no opportunity to mess with the pomposity of the music business is passed up. There’s no sideways glances to camera, no ironic nods, it’s played straight, and that’s a hard trick to get absolutely right.

But if that’s all tempting, there is a small warning too; a price to pay. In the first series, that price was Noel Edmonds. In this one, it’s Alan Yentob who introduces the show. My heart sank when he appeared in the otherwise superb W1A – “you can’t laugh at me”, he’s telling us – “I’m in the joke”. They slightly puncture it here by labelling him as Melvyn Bragg, but I bet he loves that, damn it. Maybe there’s a triple bluff thing going on, but it’s a bluff too far for me. Deep breathe through his section, it’s not long.

The producer/director Rhys Thomas appears as himself – the voiceover tells us he’s multi-award winning, which is true, though his “OBE” is not. But hell, if you can’t award yourself an OBE when you’re making a roc/doc/mockumentary, when can you?