It’s 5.30am and the 12 remaining Apprentice hopefuls are hastily pulling on their customary polyester finery in preparation to stand, blinking, at a service station off the M25.

Here, Lord Sugar appears, flanked by Nick and Karren both sporting dark sunglasses, suited and scowling, in an image of what I imagine the Men in Black would look like if they’d broken down on the motorway and the only prospect of nourishment was a breakfast burger at Little Chef.

This bleak strip of concrete at Junction 23 is a good metaphor for a candidate’s journey on this programme: soulless, unmemorable, unnecessarily long, and nowhere near Canary Wharf.

“You must all be wondering why I brought you here,” says Sugar, even though all wise viewers will know by now not to question the irrelevance of the locations he chooses, and why it’s always, without fail, punishingly urgent to set off before six in the morning.

“I’ve laid on some coaches,” comes the comforting explanation, as a few reluctant-looking coaches crawl up behind the candidates. Apparently, these sad harbingers of budget winter breaks to northern France and sicky school trips are “money-making machines”, but really that’s Sugar’s wafer-thin excuse to make the teams do yet another task with the highest potential for humiliation requiring the lowest level of business acumen: organising a coach tour. 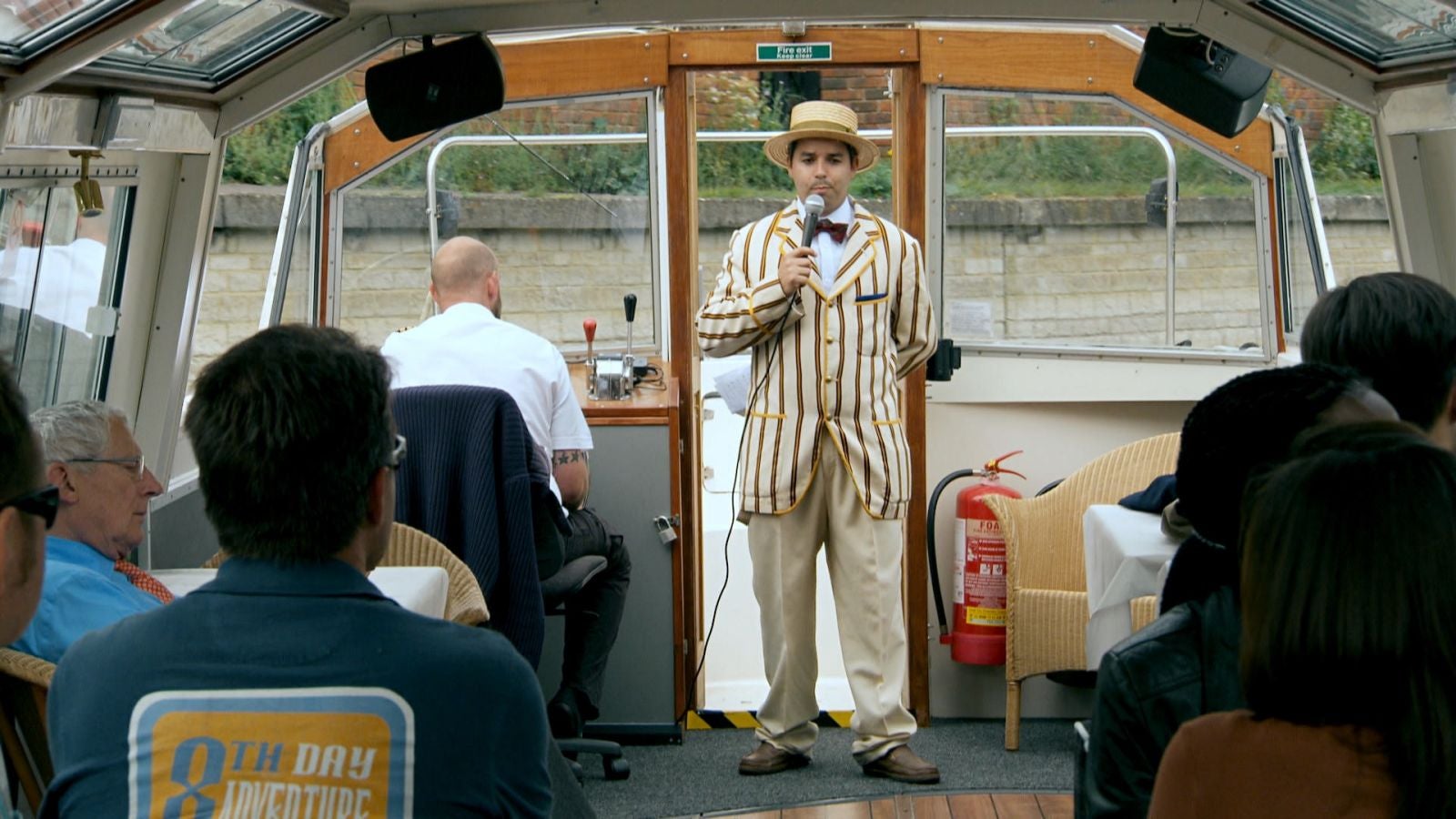 Imagine being that tourist. Imagine turning up in London, mastering your route through the awesome spectral tangle of lines that make up its subterranean network, to eventually find your way to Victoria Coach Station. Imagine surfacing from the Tube at Victoria, feeling the spark of spontaneity and uncertainty that having a pulsating, enlightening, strange city at your fingertips fires through your nerves.

You’re just about to set off to explore, clumsily but joyfully taking pictures with your iPad – the equivalent, by the way, of using an industrial-sized solar panel to wedge under the leg of a wonky table – when you are offered a coach tour. By a man, called James, wearing a shiny waistcoat, who proceeds to scream Wheels on the Bus at you passive-aggressively as you are inescapably driven to Kent, before panic-selling you outsized Fruit of the Loom t-shirts bearing blurred iron-on pictures of castles, cutting your tour short, and then asking for a “cheeky tip” for his troubles. Imagine that.

Well, clearly this was Sugar’s vision for yesterday’s episode – as what on earth does devising a tacky history trip teach us about cut-throat entrepreneurship? – and it worked. 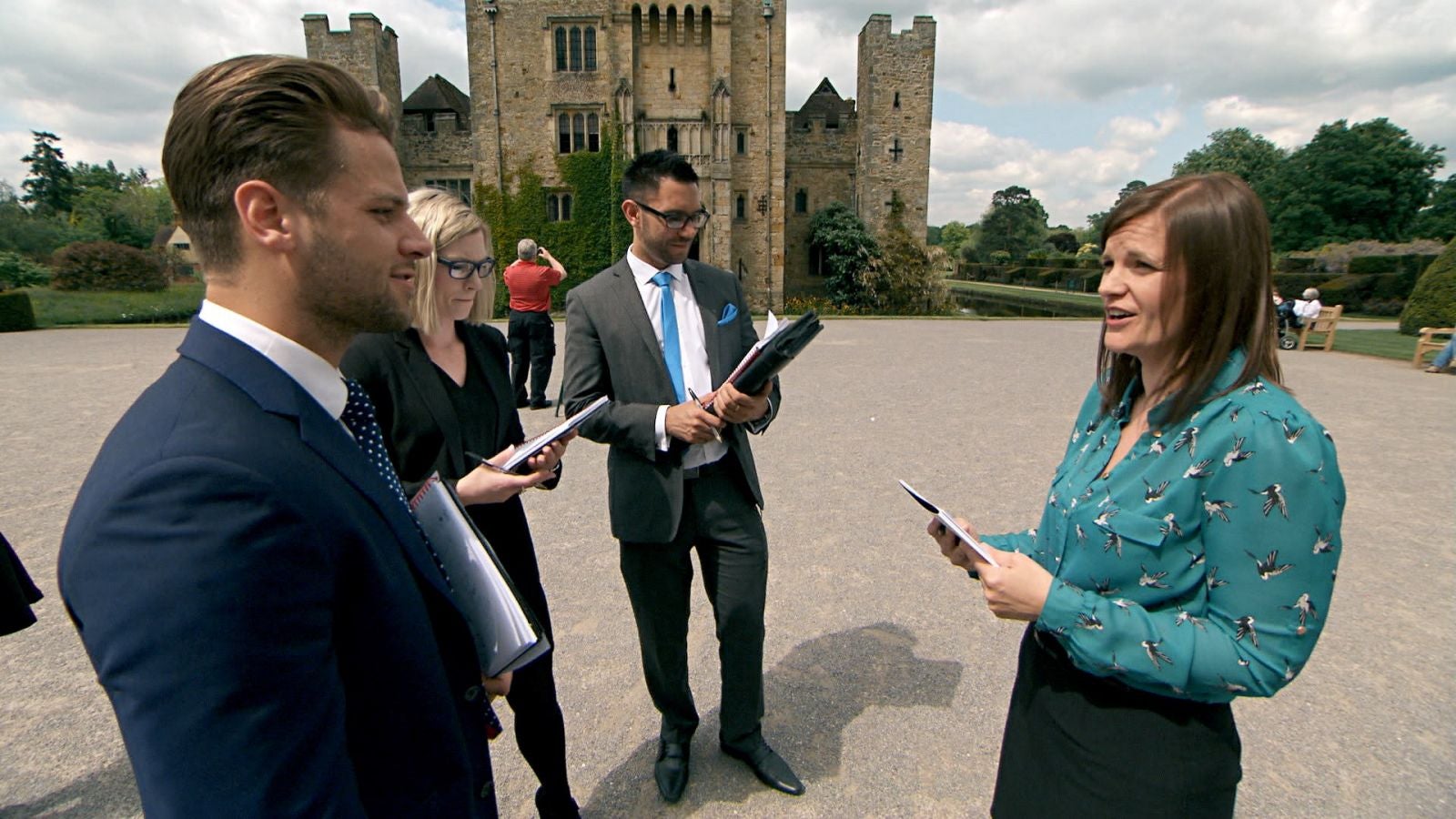 Team Summit is led by Sanjay. Remember him? He’s the guy who thinks he’s better looking than nine out of 10 people he walks past in the street. Which streets he regularly walks down he doesn’t specify.

Daniel, a sort of oversensitive and underenthused David Brent character, appoints himself project manager for Team Tenacity. Australian Mark isn’t very happy about this, as he believes he has a more appropriate CV for the task at hand: learning facts about British history off Wikipedia and saying them at dozing tourists on an overpriced bus ride.

Each team proceeds to show off its knowledge of British history.

Team Tenacity looks to Oxford, enthusing about some sort of “very English-based castle” to which they can transport lucky punters. And Summit go to visit Kent, for something “based around history”; their talk of Henry VIII is an exciting opportunity for the show’s usual thrusting strings to be substituted for a soundtrack of pseudo-Tudor arpeggios chirruped by a cheap swanee whistle.

James attempts to achieve 80 per cent off ticket prices to Hever Castle (where a number of Henry VIII’s wives resided at different times) and, after a lengthy and awkward period of haggling, swaggers away with… the same discount the Castle offers to all group visitors. Jemma looks disapproving, but that may just be her face while she thinks hard about how to avoid doing anything for the fifth episode in a row.

Meanwhile, the stony-faced Daniel is addressing an unexplained room full of potential tour-goers (I think they were “laid on”. That’s the only explanation), attempting to sell them a trip to Blenheim Palace, “where the Winston Churchill was born”. And we’ll throw in some extra definite articles for free.

Bianca on the other team doesn’t do much better, trying to push a “historic learning element” on to another prospective coach party, before merrily admitting, “it’s our last chance”. Cut-price tickets are sold all round.

There follows some inevitable footage of men in fussily accessorised suits and women in non-battlement-appropriate footwear stamping all over 400 years of British history by tearing through castle grounds screaming things like “discount” and “margin” – poignantly echoing the last words Anne Boleyn uttered before her ultimate deadline. 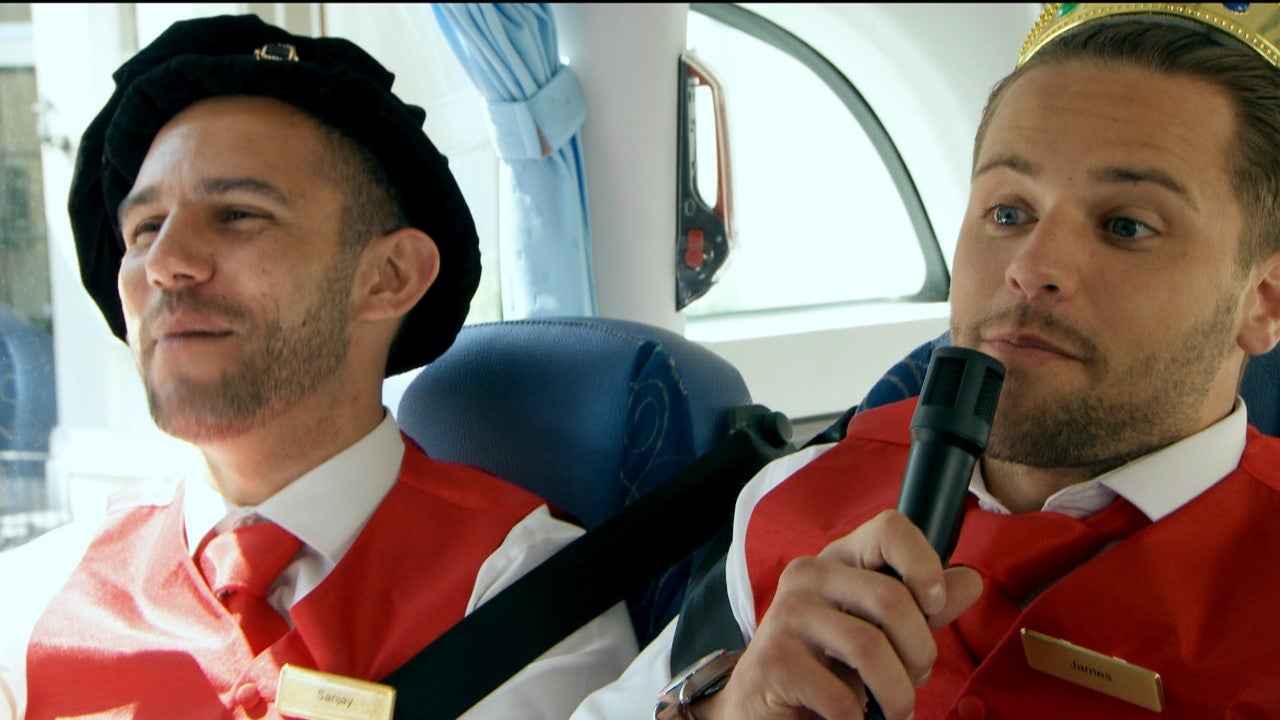 Somehow, a few actual humans are persuaded to climb aboard the teams’ buses of horror, and off drive Tenacity and Summit Tours. They have to wear degrading shiny waistcoats as tour-guides, although many opt for historic dress. Sanjay wears one of those charming baggy Tudor berets, for example, clearly still thinking he’s a total hottie – particularly if nine out of 10 people he walks past at Hever Castle happen to be ghosts of Anne of Cleves.

Karren Brady gazes resignedly at the coach window’s “In emergency break glass” sticker as James and Sanjay yell One Man Went to Mow and Wheels on the Bus at their history-keen passengers for the entire journey. “I’m just recovering from the coach journey from hell,” Brady tells us afterwards, before asking “where are we?” to the team, in one of those thrilling moments when she breaks the Apprentice fourth wall.

Upon arrival, the actual tour is no better. James, wearing a plastic Burger King crown, comments on the “lovely shapes and sizes” of topiary lining Hever Castle’s grounds. Jemma takes over once they get inside, gazing at her notes, pointing out a non-existent “photo of Henry VIII” without looking up, and explaining that the infamous king “wanted to move on and caused a bit of controversy with Anne”, by way of describing Boleyn’s brutal end to a curious tourist.

In contrast, Lauren of Team Tenacity gives an accomplished notes-free performance that Ed Miliband would envy, as she takes her tour around Blenheim. But aside from this, the rest of her team’s effort seems to consist entirely of inadequate sandwiches and Felipe explaining to people sleeping on a barge through Oxford the intricacies of the university’s archaic bachelor-to-masters process. 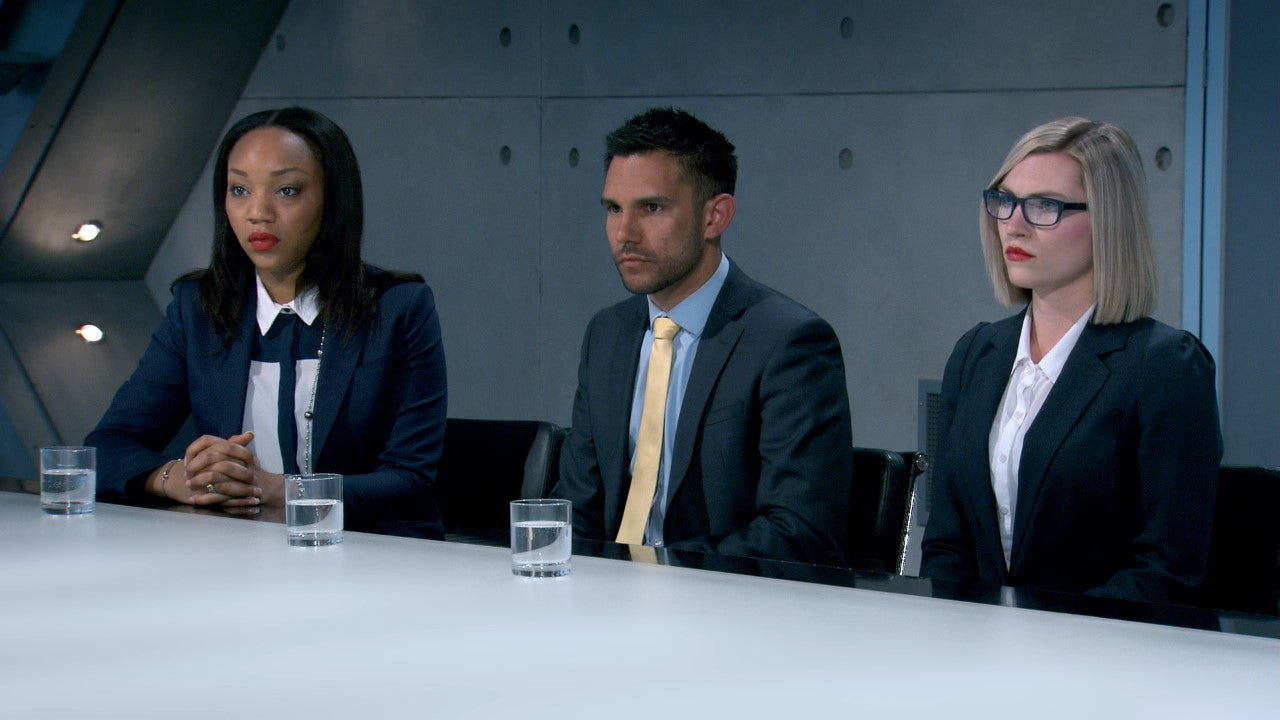 “If Anne Boleyn’s neck was as thick as you are, she’d probably still be alive.” BBC/The Apprentice

Tenacity – the team that doesn’t offer a tour informing customers that the story of Henry VIII and Anne Boleyn is that “they grew apart” – wins, of course. But team members pat Mark on the shoulder rather than praising their project manager, Daniel, who proceeds to bite his lip angrily during their reward as he is hoisted in a harness up the Orbit. “How is this a fucking treat?” he seethes. “I can actually feel the sick coming,” adds Katie.

Meanwhile, the boardroom offers an incredible lesson in the English language:

“Where is your brains?” asks Lord Sugar (ie. “can you help me use a plural please?”).

“It’s unfair Sanjay is trying to leverage blame on myself,” laments Bianca (ie. “it wasn’t me”).

“I believe that I swotted up also,” counters Jemma (ie. “…but not in English”).

“Where is the failure of this task lay – with whom?” asks Sugar, as a final lesson in how to approach blaming others for their lack of clarity, brevity and intellect.

But when everyone stops talking like Yoda, it’s Jemma who gets the chop. Unsurprising really, as “I’m always the girl who nearly wins,” is the key transferable skill stated on her CV. It takes up the space where a history GCSE would be.

“The Australian charm came in quite handy.”

And indeed, it did seem to work, as his teammates clearly warmed to him during this task. And warmth is a rare thing on this cold sweat globule of a programme.

Very good at giving a fluent history tour. Will this help her in the business world, or will Lord Sugar decide it’s just the kind of useless bourgeois skill they don’t waste their time teaching you at the University of Life?

Did he convert his BA into a Masters or not? Maybe they’ll let him stay for the interview rounds just to keep viewers on the edge of their sofas as they wait to find out.