There’s a scene in the second series of the BBC’s Sherlock in which the detective goes to visit Irene Adler – the woman who will become the woman. She is accused of blackmailing a princess with kinky photographs, so Sherlock decides to dress up as a vicar in order to gain access to her flat. But Irene is ahead of him; she knows who her visitor is and she knows what he does. When her assistant asks her what outfit she will wear to greet him, she replies simply: “The battle dress.”

A moment later, she is standing in front of Sherlock. She is completely naked. His eyes scan her body, drawing only a confused blank where he would expect the detail of a cuff or the bulge of a pocket to give up its secrets. She turns the tables on him, pointing out the ridiculous subterfuge of his clerical collar. “Do you know the big problem with a disguise, Mr Holmes? However hard you try, it’s always a self-portrait . . . I think you’re damaged, delusional and believe in a higher power. In your case, it’s yourself.”

Most of us will have had the sensation, at one time or another, of feeling as though we were dressed up as someone else. For a job interview, you become a neater, smarter version of yourself, for instance. We stubbornly cling to the “traditional” white wedding dress, even though it became a tradition only a century ago. And yet something of ourselves always bleeds into the image: everyone has a friend who has only to touch a freshly ironed shirt to crumple it, or one who can mysteriously carry off styles that make us look like unformed dough. And, unlike Irene Adler, most of us are unwilling to opt out of this system of signification altogether (not least because it’s cold out).

Both Women in Clothes – a new book ­edited by the New York literary darlings Sheila Heti, Heidi Julavits and Leanne Shapton – and the “Women Fashion Power” exhibition at the Design Museum in London attempt to unweave the stories we tell through our dress. Women in Clothes is ultimately more successful: as the cover proudly announces, it features contributions from 639 women, including the artist Miranda July, the writer Kiran Desai and everyone’s favourite hook for a comment piece, Lena Dunham. By doing this, it underscores the universality of the system, even as it highlights the diversity of its expressions.

The book is a ragbag, designed like a scrapbook and punctuated with grids of single items – tights, buttons, logo T-shirts – from various individuals’ wardrobes. The effect is to make you realise how much time and mental effort women expend on their clothes and also how much they rely on them to tell stories, either about where they come from or who they want to be.

There’s a common thread linking the women wearing their grandmother’s wedding ring and Emily Gould, the favourite of internet hate-readers, who writes about blowing her tax rebate on a pink Marc Jacobs purse. “In 2004, Marc anything was the ultimate status symbol for a specific kind of New York City woman, the kind I aspired to be: someone with natural charisma, a cool job, effortless and understated sexiness and plenty of cash,” she writes. It cost hundreds of dollars but, six years later, battered by wear, she sold it at a yard sale for just $10. High-fashion items are worth only what someone is willing to pay for them.

Simone de Beauvoir once wrote: “One is not born, but rather becomes, a woman.” That is certainly the case in Women in Clothes. One of the most revealing interviews is Heti’s discussion with the NS writer Juliet Jacques, who is transsexual. To be accepted as a woman, Jacques not only had to learn a new way of dressing but new mannerisms, a new voice – even a new way of sneezing. “Women are socially policed to behave with more restraint,” she tells Heti.

Clothes are a language and it’s only because we are so well trained to read them that we don’t notice. The nuances of historical dress are quickly lost to us but we can easily tell the difference between a City slicker and a goth, a hippie and a hipster. Women in Clothes addresses one of the hoariest questions in fashion: who are women dressing for, anyway? It’s surely mostly for other women, who are far more adept at reading the tiny inflections of meaning in a cut or a label.

To attract men, the rules are simpler, though that crudeness brings its own problems. Here’s one contributor, Augusta Lee: “I feel like it’s a meat market and a fashion show when I go to church. Girls dress up to try and get married.” And here’s Sasha Grey, who used to make the kind of pornography that other people in the porn business worried was too extreme. “I like to dress up and be wanted, but at this time [after ending a long-term relationship] I didn’t know what I wanted, so I didn’t want to project myself in that way. I guess I have a disdain for young women who dress half-naked but scowl when you glance their way.”

Grey’s comment underlines the idea of women’s fashion as plumage. In previous eras, there was a more straightforward class division in dress: the 16th-century aristocrat was just as gorgeously clothed and jewelled as his wife, in contrast to working people of both sexes. But a series of social shifts, including the advent of mass production in the 18th century and Beau Brummell’s creation of the three-piece suit around the turn into the 19th, put paid to that. Now, the male CEO wears ostensibly the same outfit as his graduate trainee. It is left to subtle details such as watches, or an expensive cut or fabric, to reassert his dominance. 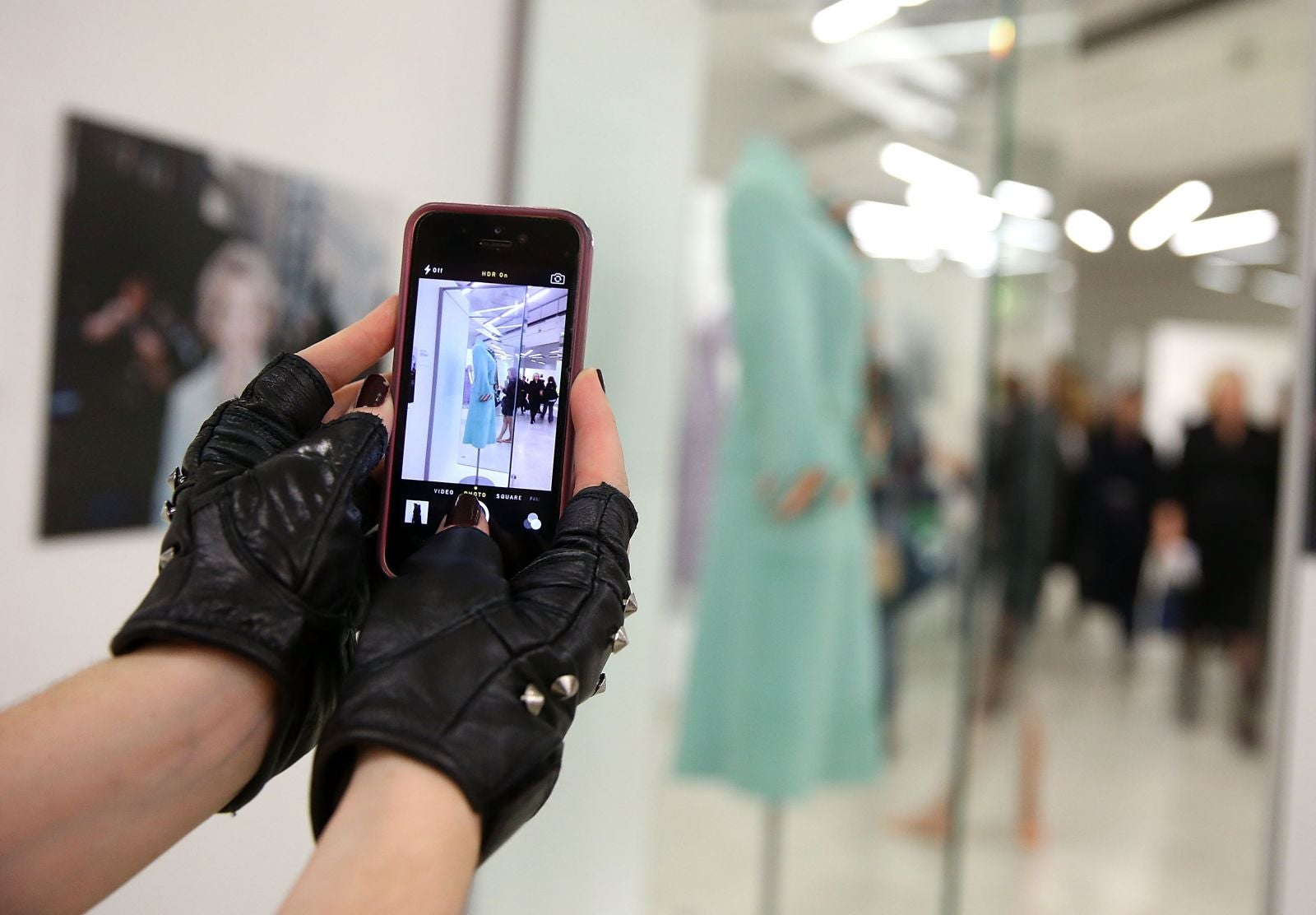 A woman photographs one of Margaret Thatcher’s dresses at the Design Museum’s exhibition.

This approach to power dressing leaves women handicapped. As the Design Museum’s exhibition demonstrates, some women adopt a kind of “man camouflage” – think Angela Merkel in her Pantone three-buttoned suits, or Hillary Clinton’s severe business wear. Others head in the opposite direction, hamming up the femininity while swearing blind that uncomfortable cantilevering leaves them feeling “empowered” (possibly in the same type of interview in which they claim to “just be really good at multitasking” or boast about getting up at 4.30am to do an hour’s Pilates before the children wake up).

The old double bind is on full display here: women are judged on their looks but also judged for caring about their looks. You can be decreed either dowdy or vain. For women in politics, the choice is particularly depressing: the Daily Mail devoted a double-page spread this summer to the “Downing Street catwalk” as new female ministers were appointed. Baroness Stowell, the new leader of the Lords, was described as “a bit mother-of-the-bride”, while Anna Soubry was chastised for having “the air of a Mrs Thatcher tribute, fake posh voice, tough manner and everything”. Esther McVey, meanwhile, was a “thigh-flashing vision in grey check by Vivienne Westwood . . . She needs to tone it down a little for attending cabinet meetings.” No wonder this exhibition quotes Miriam González Durántez, the wife of Nick Clegg, saying that she has little idea how much she spends on clothes but it’s “much more since Nick is in politics”.

The strongest section of the show addresses the quagmire that a powerful woman in a man’s world has to navigate every morning. The 26 women who have contributed an outfit are from very different backgrounds and cultures but many face the same struggle: finding the Goldilocks point of fitted but not too fitted, feminine but not too feminine, attractive without being overtly sexual. Little wonder that so many, when they find a formula, stick to it rigidly – in the fairground mirror logic of fashion, if you wear the same type of clothes long enough, it goes through frumpy and out the other side into “a signature style”. (Cue a picture of the Queen in black heels and a block-colour coat, with matching hat and bag.)

The saddest part of the exhibition, however, is its circularity. It begins with 19th-century corsets, nipping the waist to waspish proportions, and then charts the history of the “land girls”, in their practical overalls, and 1960s women ditching starched tailoring for free-and-easy miniskirts. We get zips and nylons and high street labels that make fashion accessible to everyone.

Then we finish with three sets of Christian Louboutin heels – none lower than six inches. These are “limousine shoes”, hard to wear if your job involves anything other than tottering in and out of cabs or being rented by the hour by oligarchs. No matter how hard we try to break down the walls that imprison women, someone will always stick a Swarovski crystal on them and sell them back to us as fashion.

“Women in Clothes” is published by Particular Books (£24). “Women Fashion Power” is at the Design Museum, London SE1, until 26 April 2015