We meet our 11 remaining candidates executing their customary early-morning, semi-clothed impression of people who are blithely unflustered by a lurking camera crew taking unnecessary torso shots at 5am. It’s business as usual at the Apprentice house.

“That’s the army isn’t it?” asks Mark, wearing the bewildered face of a young soldier who is unsure if his captain is either commanding that he go to war or ordering him to take part in a futile pseudo-business scenario for negligible reward.

They soon gather on the deck of the mighty warship, which has waited with dignity and poise, tethered to the edge of the Thames in silent hope for over half a century, for the day when it would play host to a few scowly shots of Nick Hewer and Karren Brady wearing suspiciously outdated sunglasses.

“Vessels like this inspired the board game Battleship,” Lord Sugar explains, triumphant in his discovery of a suitably hyperbolic location for breaking it to his wannabe business partners that they will from now on only partake in activities asked of Year 6 classes by knackered teachers a few days before breaking up for Christmas. They will have to split up into two groups and make their own board game. He duly lays on some sugar paper and glitter glue, and the teams set to work. 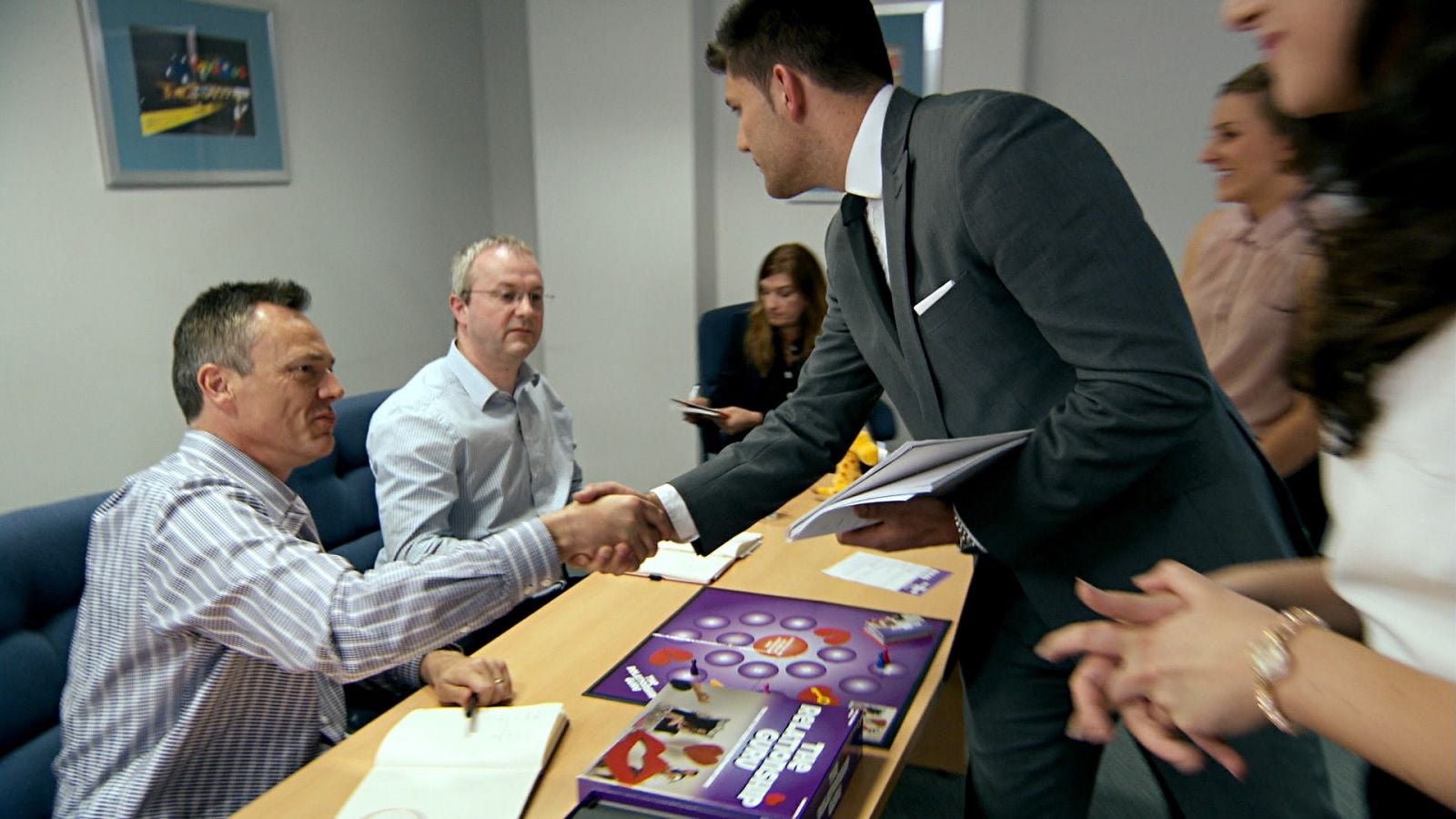 Pamela, a perpetually disapproving, smugly bitter 23-year-old brand manager, is appointed leader of Tenacity. “Super,” she simpers through subtly gritted teeth. But it’s Lauren who’s the ideas woman, for she suggests a game involving propped-up sheets behind which players use their hands to form silhouettes: “it’s modern,” is her take on shadow puppetry, which originated during China’s Han dynasty.

But oh no, Pamela and Daniel are far keener on an even more cutting-edge idea than that: a “battle of the sexes” game, involving sharply perceived interplay between the genders and wry epigrams regarding the charming nuances that make us man or woman. Devastating observations such as “What do men least like? A visit to the mother-in-law, or your partner snoring?” and “men don’t tidy up their clothes”, and prefer “cricket to waxing”. And do women “like a man to ask them out” via text? Would they eat chicken salad rather than chocolate? If only the Han dynasty could see how far we’ve come.

Daniel, in a chilling revelation of his perception of society, writes all the questions for the game they call Relationship Guru. “I’m thinking it would be full of comedy,” he declares, looking slightly pained, like his missus just scolded him for leaving the loo seat up.

Pamela defies the market research – which consists of her team attempting to explain the concept of dating to a handful of nonplussed middle-aged male board game enthusiasts in short-sleeved shirts – and pushes on with the dated idea. Sorry, dating idea. “They didn’t like the idea of anything to do with relationships,” sighs Lauren.

Meanwhile, Team Summit go for GeoKnow, which is sort of a children’s Articulate or Taboo, in which they have to guess the country being described by their teammates.

It is a hit with the primary school kids they try it out on, who joyously scream “CHINA!” when someone mentions sushi, but such success doesn’t seem to bring harmony to the team, as back at the house, James has an aggressive go at Bianca while eating a sorry bowl of sliced bananas, as she hits back: “when I’m finished, you can finish”. Which is sort of an enduring motto for The Apprentice. Will it ever finish so that we can finish? 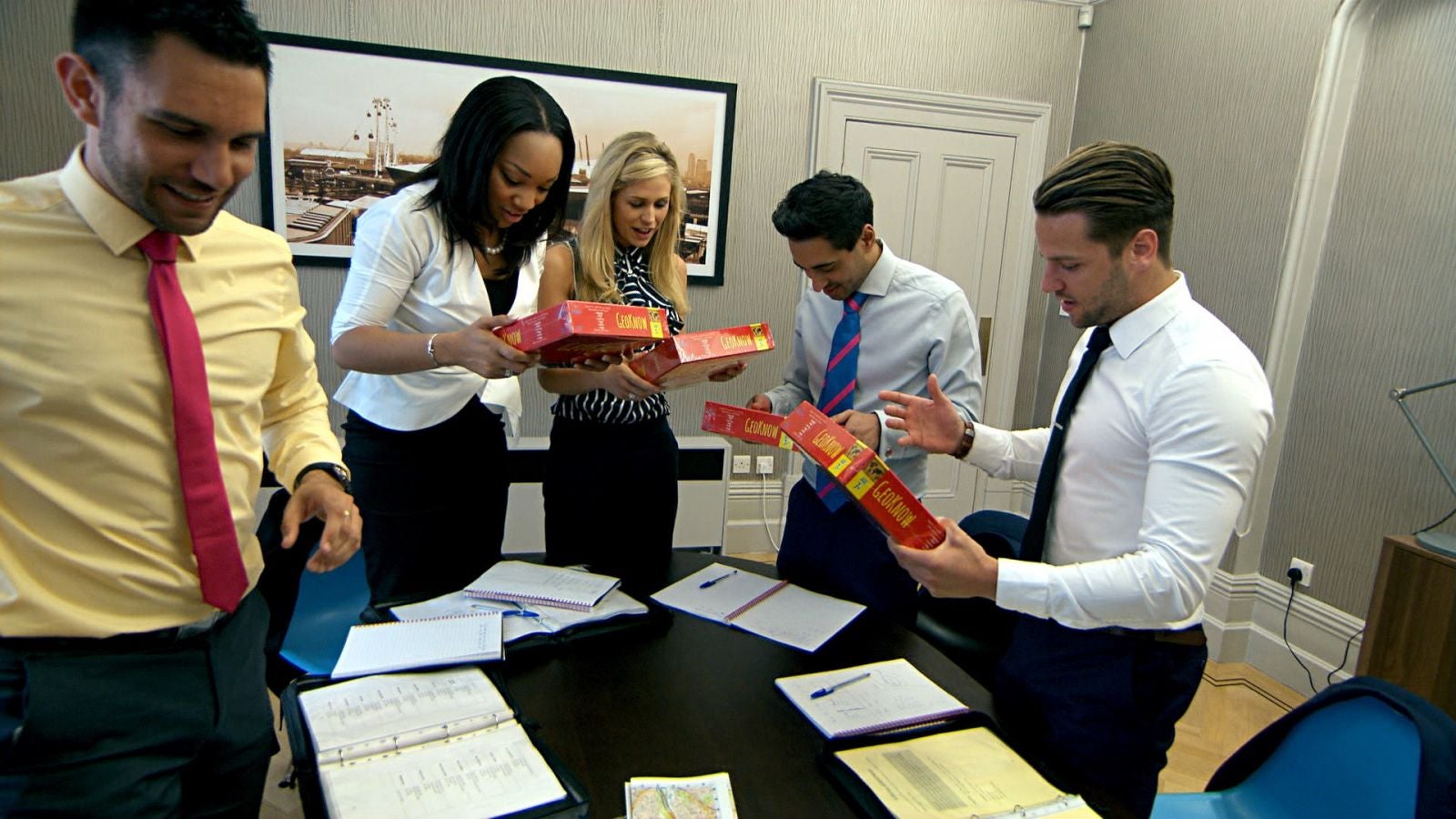 Summit tries out its own game as a team. Solomon, grinning eagerly (he is in the recommended age range after all), successfully denotes the US with a sketch of a burger. “You could also say, ‘I’m from America’”, blinks James. He’s a rule-breaker, that one.

When some sceptical adults try out Relationship Guru, it is an excruciating experience as they deem it sexist, offensive, and too subjective. “It is a bit subjective,” concedes Lauren, “whose opinions are they?” Well, they’re clearly Daniel’s, who wrote the questions. But you were probably too busy gossiping and spending a mystifying amount of time in the bathroom to pay attention to that bit, weren’t you love?

As they attempt to sell this woeful cardboard square of retro-sexist tropes to Waterstones – which will surely never again agree to be the subject of a laying on – one of the potential buyers ventures, “there are quite a lot of stereotypes involved.” “Yes, absolutely!” chirps Daniel, cheerfully. But for some reason, they manage to sell this adult relationship game to Toys R Us, so all is not lost. Apart from the innocence of youth. 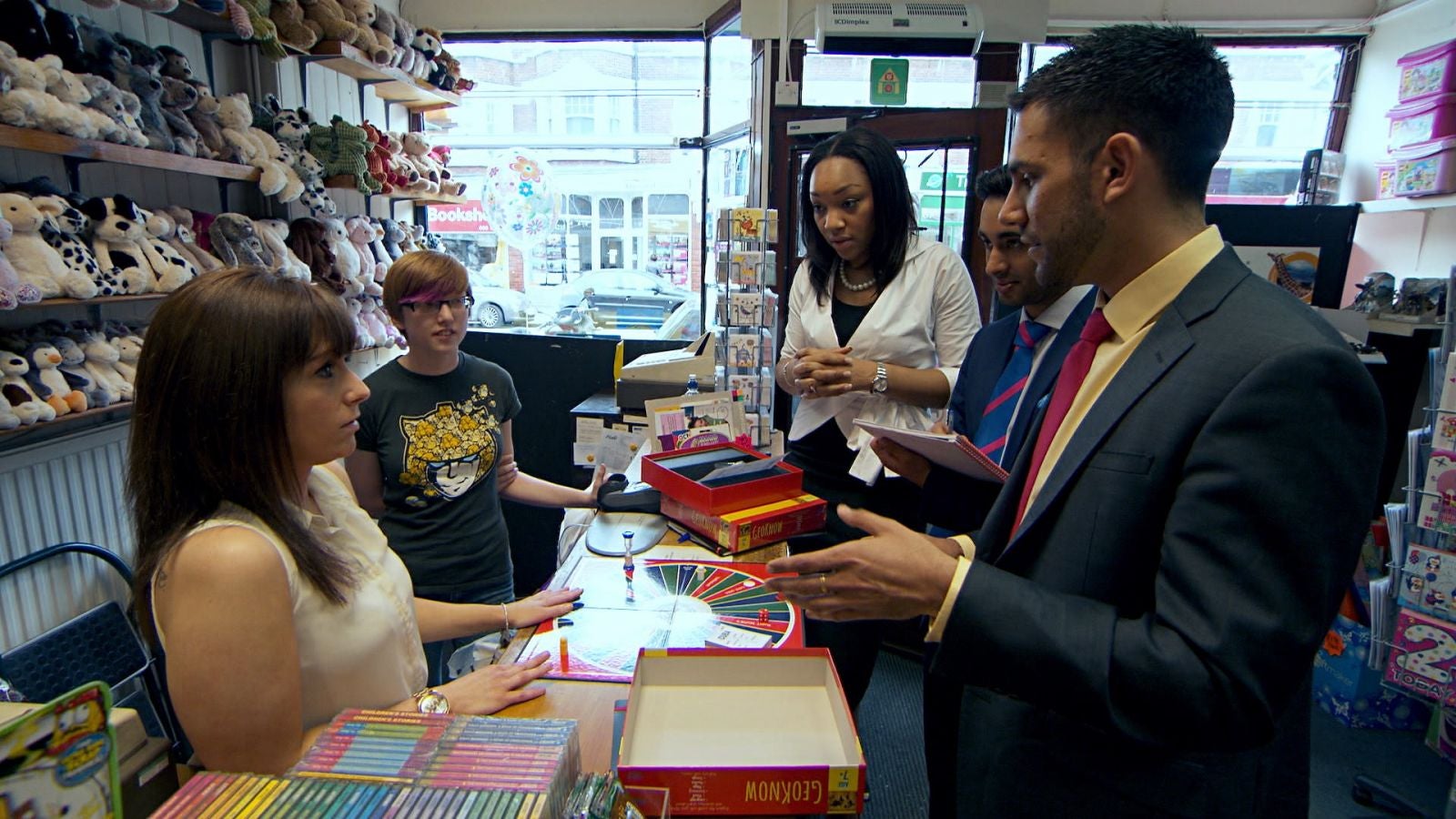 Meanwhile, over at the markedly safer world of family-fun geopolitics, Bianca sells six sets of her team’s board game to a small retailer in Westminster, promising them borough-wide exclusivity. Her team then has to go to the flagship Waterstones in Westminster, among other nearby stores, to pitch them a product they are not allowed to sell.

In a disturbing sequence of cold sweat and shaking fury, James screws up every muscle in his little angry face and seethes: “six games? Is she crazy?” And then he punches a wall and heads down the pub to play darts, because he’s a man.

“You’ve finally grown a pair,” are Lord Sugar’s first words to him, as everyone eventually gathers in the boardroom. Passé references to male genitalia for connoting bravery! He’s clearly been playing some Relationship Guru. 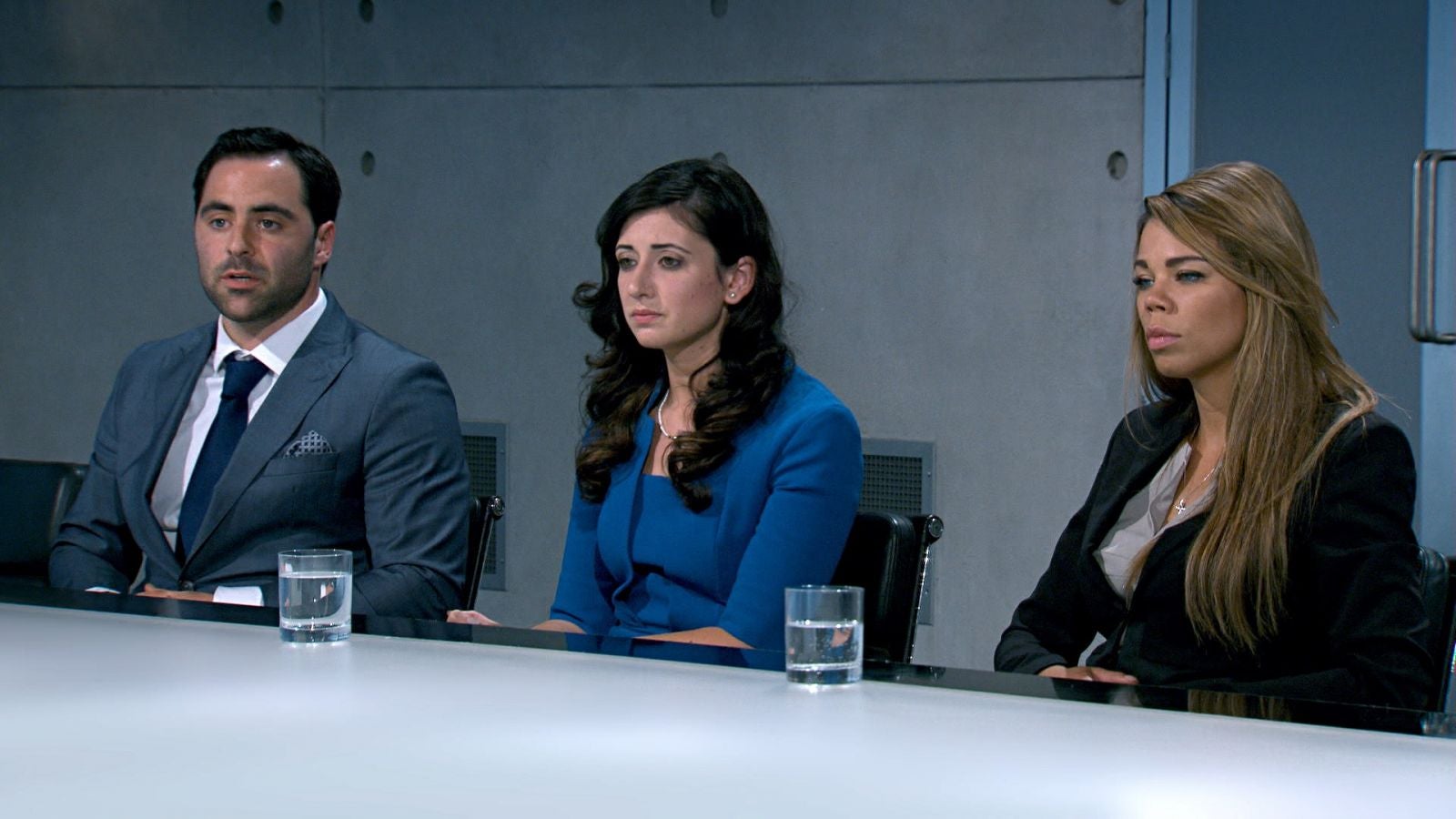 I don’t need to tell you what happens next, because it is pretty much a paint-by-numbers Apprentice denouement. But here’s a quick rundown:

Pamela, whose team loses, says lots of statements like “I made a decisive decision”, the winning team is treated to a surreal day out shooting penalties against erstwhile England goalkeeper David Seaman, who proceeds afterwards to shower them in champagne, Daniel crosses his face in anguish when he is brought back into the boardroom, Lauren gives a last-ditch pitch for “Shadow Me”, and then the most boring one goes. That’s Pamela. But, hang on. Don’t women prefer being dumped by text?

In this task, Felipe had his hand photographed, and suggested, wrongly, that women enjoy eating carrots. He hasn’t done much since being team leader in the first episode. Is he the “dead wood” Lord Sugar is so keen to cut down?

“It’s hard to fly like an eagle when you’re surrounded by turkeys.”

Do Australians have turkey at Christmas? Do they barbeque it?

“You can’t say you don’t like something and bring nothing to the table,” was the only thing she brought to the table.