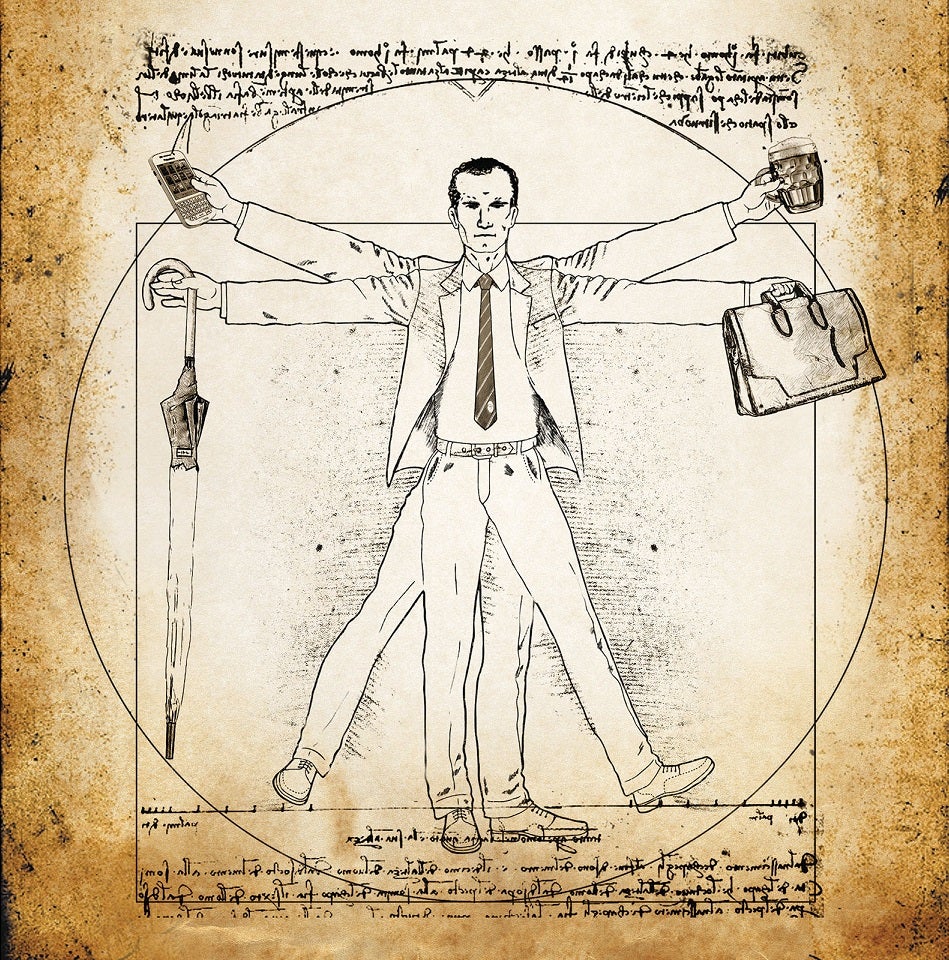 I came upon Mr Miliband in a corridor. It was at a party: smart, glittery, arty, movey-shakey peeps and me. He was pressed against the wall. I was sidling. Normally, I wouldn’t write about this. It wasn’t public, it wasn’t professional, he wasn’t “on”. But this isn’t intrusive and it’s not unpleasant; it’s not really about him at all. It was his whistle. I noticed he had on a smarter than usual Labour Party single-breasted two-piece; a slim but not skimpy, fitted but not peaky suit, in a blue that hovered between the RAF and Ella Fitzgerald. He smiled in that way politicians smile at first-person columnists who work for Rupert Murdoch. “Magic flute,” I said.

“What?” He looked nervous.

“Run your finger down the inside of your lapel, just below the buttonhole.”

“What’s it there for?” He was surprised.

“It’s for the stem of your poppy, on Remembrance Sunday. All English handmade suits have them. It’s one of the little things the establishment adds to snag you.”

Suits are malevolent magicians’ sleeves for socialists, full of patrician loops and tricks, small, embroidered, cryptic messages of deference and privilege. They are ever the uniform of the enemy. They are also the greatest British invention ever. That’s not hyperbole or jingotastic boasting. It’s the plain, double-breasted truth. Nothing else that comes from this pathetically stunted island has had anything like the universal acceptance, reach or influence of the suit.

Look at it as if you’d never seen one before. Nothing about it makes sense. It’s not practical; it’s not particularly comfortable; it doesn’t work; it’s not decorative; and it doesn’t make us look good, rather like the establishment it represents. And, like most things in this place, it arrived through a series of accidents, mistakes, misinterpretations, good intentions, conventions and slovenliness, all of it growing out of radicalism.

The suit is the polite taming, the socialising, the neutering, of riding and military kit. Those pointless buttons on the cuff were moved from lateral to vertical. You used to be able to fold the end of your sleeve over and forward and button it like a mitten, for riding in the cold. Incidentally, the buttons on the cuff should correspond to the number of buttons on the front, not for any practical reason, but just because that’s what they should do. The vents at the back are made for sitting on a horse. The slanting pockets are for easy access when mounted. The suit that we wear was, in essence, invented by Beau Brummell – an obsessive, highly strung, socially insecure, thin-skinned aesthete, snob and genius. And, of course, an Etonian. He wanted to simplify the extraordinarily otiose decorative court dress to give men an elegant line. When the bailiffs finally broke into his rooms, they found only a simple deal table with a note that said, archly, “Starch is everything.” Beau escaped to France, where people said he looked like an Englishman and he died in an asylum.

We have to thank the members of the Romantic movement for the sober colours of suits. It was their love of the Gothic that put us in grey and black but the suit stuck. It said something and it meant something to men around the world; it said and meant so much that they would discard their local dress, the costumes of millennia, their culture and their link to their ancestors, to dress up like English insurance brokers. There is not a corner of the world where the suit is not the default clobber of power, authority, knowledge, judgement, trust and, most importantly, continuity. The curtained changing rooms of Savile Row welcome the naked knees of the most despotic and murderous, immoral and venal dictators and kleptocrats, who are turned out looking benignly conservative, their sins carefully and expertly hidden, like the little hangman’s loops under their lapels.

Radicals have always had a problem with the suit, always underestimated it. They tried to co-opt it as the Sunday best of Methodism, the Saturday night of working-class lads released from overalls, muck and sweat. They wanted the suit to signify the working-class respect for achievement, the rite of passage to grammar and university, wedding and funeral. But the suit is not simply an empty sack, not just a few yards of worsted with some silly buttons. It has an innate opinion. It comes with the power.

Every man imagines that he will turn his suit like a double agent, that it can be twisted to his will with irony or comedy, that the man can undermine its origins. Every chap thinks he’s a match for his suit and, every year, clever and witty designers offer a twist, a take, a rejig; but for over 200 years, the suit has remained impervious, maintained its bland menace, kept its implacable secrets uncreased. You think you wear the suit: the suit wears you. It is woven magic, necromancy, the black art that hides in plain sight. No one knows or can say what the spell of the suit is, or how it works, but still it exudes its inoffensive writ.

It is the naivety of young men to believe that it’s what they think that is important; that surface and show and fashion are what the established order uses to maintain itself. But just look at those group photographs of powerful men, of left and right, outside conferences and meetings, and see the power of the suit. It’s not in the singular but the collective. If there were only one in the world, it would be a mad thing, but its strength comes from the massed ranks, the united power, the union of flannel.

AA Gill was a journalist and author. He wrote for Vanity Fair, the Sunday Times, GQ and Esquire, as well as writing several books including AA Gill is Away (2003) and The Golden Door: Letters to America (2012).