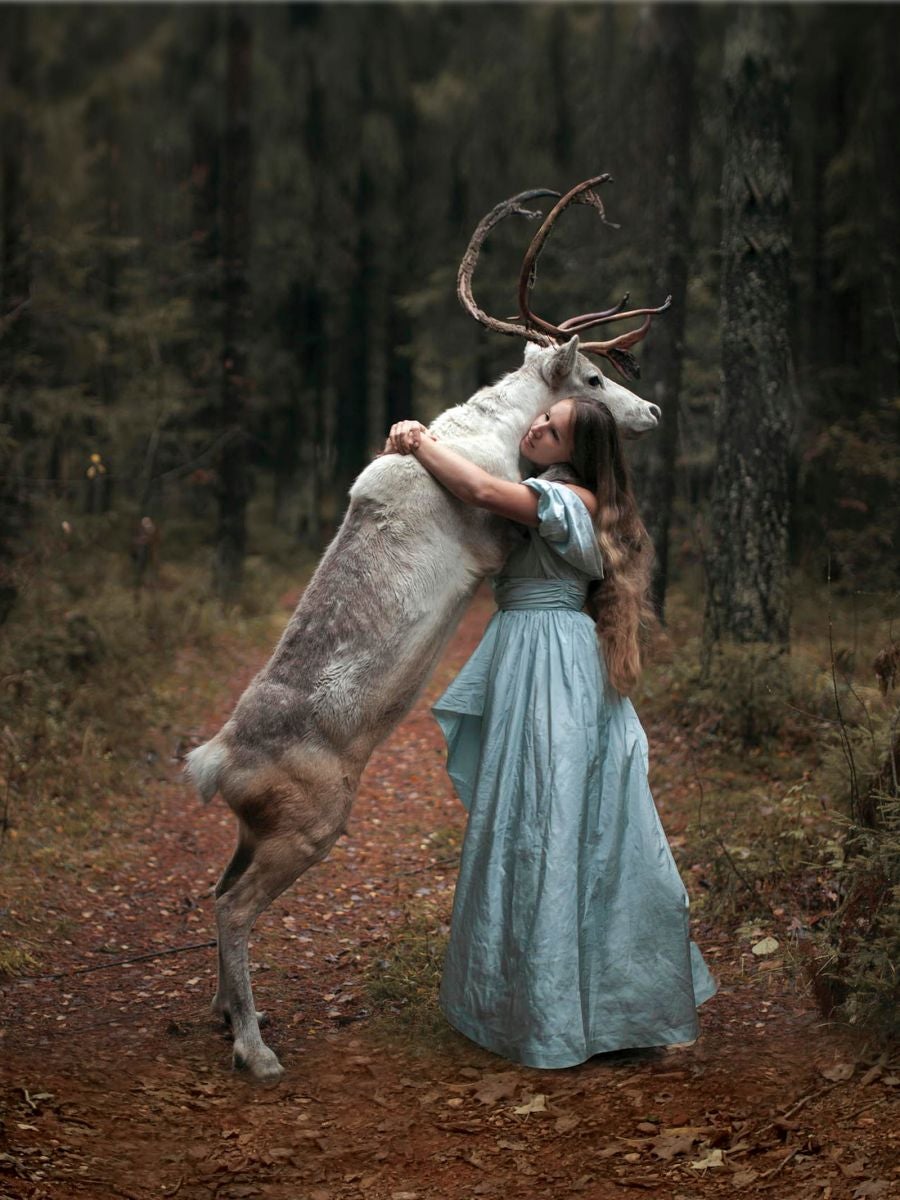 Dearest possession: we are kindred spirits to other animals roving the earth but intelligence gives us the edge over our fellow creatures. Image: Katerina Plotnikova.

What makes us human? It is a terribly difficult question and one I find almost impossible to answer. It would be easy to gloss over the subject and pontificate about love, compassion, self-sacrifice and all the staggering achievements of mankind, but I feel that would be “copping out”.

After the magnificent dinosaurs, the primates arose, our great ancestors. Less than ten million years ago, the first creatures that resemble human beings evolved, accompanied by a spectacular increase in brain size. It is the past that is the clue to the complex nature of man.

Man – an impressive being who made his entrance on to the world’s stage with formidable effect. It is this creature’s brain that intrigues me most. Deep inside is the brainstem; capping the brainstem is the R (reptilian) complex. This is the seat of aggression, ritual and territoriality, which evolved hundreds of millions of years ago in our ancestors. Deep inside the skull of every one of us lies the brain of a crocodile! “Never make friends with a crocodile.”

Surrounding the R-complex is the lim­bic system, or “mammalian brain”. This is the part of the brain that is associated with moods and emotions. Living an uneasy truce with these primitive brains is the cerebral cortex – where matter is transformed into consciousness. It is here that we have ideas and inspirations. Here we read and write, compose music, learn from the sciences and meditate on all things sacred. This is the distinction of our species, the root of our humanity. It is what makes us human.

Each of us has over a hundred billion cells in our brain, comparable to the number of stars in a giant galaxy. The cerebral cortex is liberation. No longer are we at the mercy of our reptilian brain. I experienced the cortex in all its glory when I reached 28,400 feet on Mount Everest in 1993 without
oxygen. It was a stunning sensation, a spark­ling field of rhythmic flashing points. When I closed my eyes coming down the mountain, I could see the cortex and observed millions of flashing lights, dissolving and emerging in a sea of cosmic delight – I couldn’t stop laughing.

But you can see that the cortex has to deal with the ancient reptilian complex, the seat of aggression. It is here that anger, greed, war and strife are nurtured. This is our problem. An old dervish in Armenia informed me that the term hu-man means tiger-man. We need to quieten the tiger.

Will we succeed? I believe so. But we cannot afford to sit on our backsides. Our earth is taking a beating. She is being wounded from all sides. Yet I have to say that thousands of people are making a colossal effort to save Planet Earth. It is not yet clear whether we have the wisdom to avoid self-destruction but I am convinced they will win; our intelligence has provided us with awesome powers.

We have so much to be proud of. In our insatiable quest for knowledge we are revealed as fine, brave explorers who are heaven-bent on seeking limitless horizons. Science works, though it is not perfect and it can be misused; I find myself huffing and puffing trying to keep up with it all. Exploratory spacecraft have been launched to study 70 worlds. Twelve human beings have been to the moon. We are the children of stardust.

My biggest love in life is space and we are venturing further into it – it is our destiny. I long to journey to the planets and the distant stars; they feel almost like a memory. Just imagine climbing Olympus on Mars – three times higher than Mount Everest! Yet there are moments when I am chilled, when I think what some of us would do to these new worlds.

When Pandora opened the box, she let out all the dark furies. When she tried to close it a sweet small blue creature flew out saying, “I am hope! I am hope!” Ladies and gentlemen, we have Hope, which embraces the heart and is the essence of the soul. We have begun to seek our origins; we are stardust yearning for the stars. I speak for Planet Earth – as long as we love and protect it, we will survive and prosper.