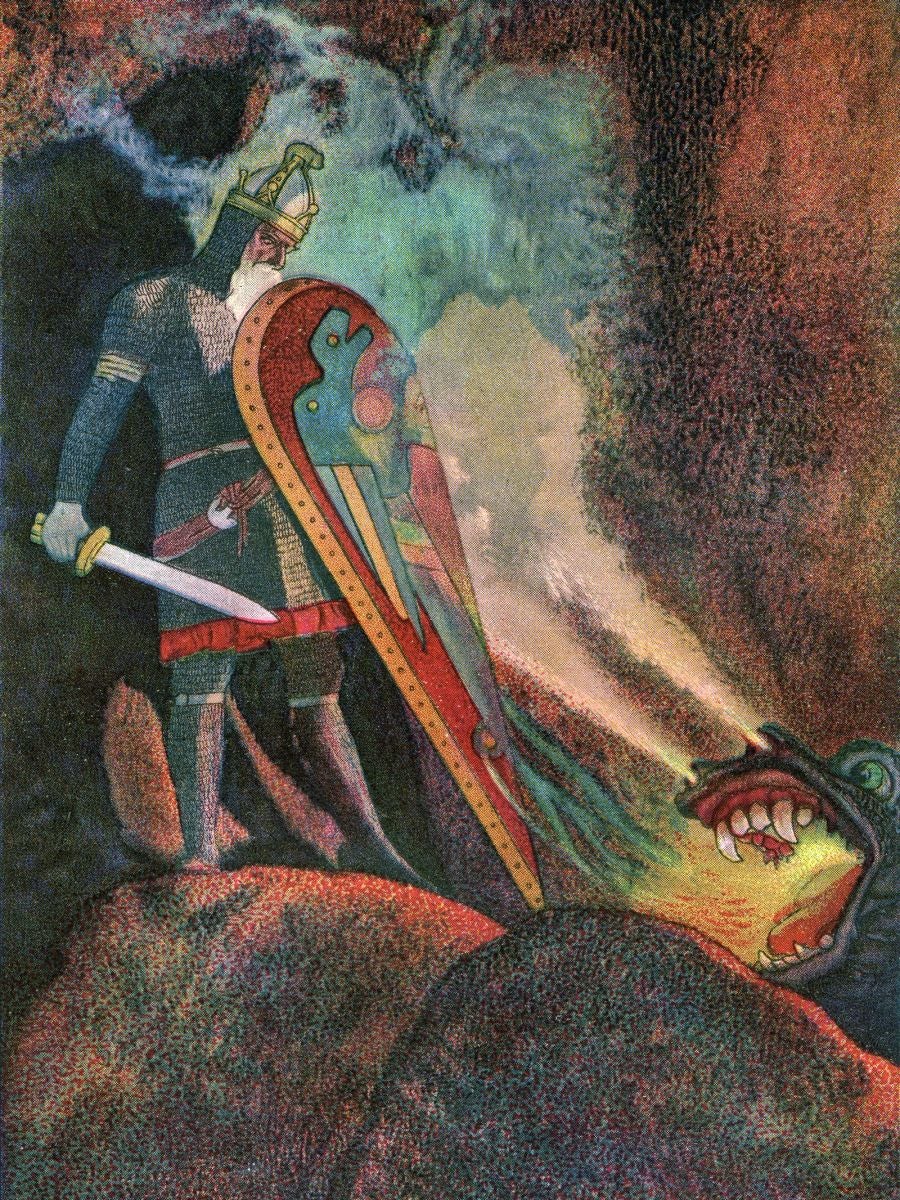 In his story “Leaf by Niggle”, J R R Tolkien imagines an artist painting a picture he can neither complete nor abandon. “It had begun with a leaf caught in the wind, and it became a tree; and the tree grew, sending out innumerable branches, and thrusting out the most fantastic roots.” In the end the picture is never put on show.

The metaphor captures the scale and gorgeous impracticality of Tolkien’s writing but not its fate. Most of his “tree” has been saved and his posthumous titles outnumber those published in his lifetime by roughly three to one. In this latest book, a deep root is exposed: his work on the Old English poem Beowulf. The surprise is how “fantastic” the root turns out to be, twisting thirstily through the scholarly subsoil to tap the groundwater of a forgotten folk tale – or “fairy story”, as Tolkien prefers to call it.

The poem, written down around 1000AD, mixes fiction with 5th- and 6th-century history. Beowulf sails from his Geatish homeland in Sweden to defeat Grendel, an ogre who has usurped the Danish feast hall of King Hrothgar. Beowulf then hunts down Grendel’s vengeful mother, but in old age, now king of the Geats, he slays and is slain by a dragon. In his 1936 lecture “Beowulf : the Monsters and the Critics”, Tolkien insisted that the poem is not just a mine for historical data into which some fantastical monsters have inconveniently strayed but a work of art in which the monsters are foils for an entire cultural attitude to life, death and courage.

The literary landscape has changed since then in a way that Tolkien would have neither expected nor accepted: he now towers in fame over Beowulf. Last year, Penguin repackaged its Michael Alexander translation as one of five “classic [stories] that inspired J R R Tolkien’s The Hobbit”.

Tolkien’s prose translation has been edited by his long-serving son Christopher, now 89, from versions dating back to 1926 (regrettably omitting an earlier, unfinished verse translation). A large, nuggety selection from Tolkien’s lectures, presented by way of commentary, ranges from semantics to genealogy, from the giants of Genesis to the Germanic concept of fate. Also included are two short, lapidary pieces of creative writing, “Sellic Spell” and “The Lay of Beowulf”. All this illuminates the poem but far more people will read the book for Tolkien’s sake than for Beowulf’s. That is fair enough.

Tolkien was studying Beowulf deeply when the First World War broke out and by the time he went off to fight in the battle of the Somme, in the summer of 1916, he had begun to map out his vision of Middle-earth. The folk narrative of an individual battling through fear or horror, experiencing loss and new-springing hope, must have chimed with his experiences on the Western Front: his enthusiasm for fairy stories was, he wrote, “quickened to full life by war”. Born out of the cataclysm of conflict, Middle-earth has since become a mirror to the modern world. Yet only Tolkien’s brilliance in inhabiting the early-medieval Germanic mindset could have produced it.

In Beowulf, we see the lordly custom of giving rings to retainers, which Tolkien subverts with Sauron, his own “lord of the rings”. We encounter Hrothgar’s golden hall, the model for Théoden’s. In the night-haunting, man-eating Grendel, we may recognise Gollum magnified; the dragon is a prototype for Smaug. For some, the world of Beowulf and Middle-earth were elided in Tolkien’s lectures: W H Auden once wrote to tell him “what an unforgettable experience it was for me as an undergraduate, hearing you recite Beowulf. The voice was the voice of Gandalf.”

Tolkien, an obsessive niggler with too many projects to fit in one lifespan, would have needed a hard push, from a publisher and perhaps from a strong-armed friend such as C S Lewis, to finalise and publish his prose translation. The version that survives, though, is far from prosaic. He cannot conceal the strangeness of the underlying idiom but his cadence is commanding and his language evocative: “He came now from the moor under misty fells, Grendel walking. The wrath of God was on him.”

Much syntactic inversion yields not promptly to grasp of mind – but few will be surprised to see archaisms such as “Lo!” and “smote”. This reflects Tolkien’s view that the poet wrote in a register already venerable in 1000AD. With kennings – metaphorical Old English compounds of words – he is more expansive than most. What Seamus Heaney in his 1999 translation gives as “the whale-road”, Tolkien, who argues that rád did not mean “road” but the act of riding, unpacks as “the sea where the whale rides” (his commentary expands the image: “watery fields where you can see dolphins . . . seeming to gallop like a line of riders on the plains”). Students may prefer Tolkien for accuracy and fans will snap his book up but it won’t convert admirers of Heaney’s poetic latitude.

The commentary shows Tolkien’s curiosity about the threshold between myth and reality. Hrothgar’s ancestor Scyld “came out of the Unknown beyond the Great Sea and returned into it: a miraculous intrusion into history”, he writes. Hrothgar’s court at Heorot, which once really existed near Roskilde, Denmark, becomes in Beowulf a scene of superhuman marvels, like Camelot. And in his aspect as “the bear-man, the giant-killer”, whose hands have the strength of 30 men, Beowulf comes directly from fairy story.

“Sellic Spell” means “a tale of wonder” and Tolkien’s experimental story strips away Beowulf’s historical aspect to expose the even older fairy story he discerned at its heart. The hero, Beewolf (a kenning for “bear”, named the “bee wolf” for its plundering of hives), heads to the Golden Hall with two companions who first try their magic powers against Grinder (Grendel). This story is the gem in the book. Only its disconnection from Middle-earth can explain why it has remained hidden so long.

Yet it is not truly disconnected. Like “Sellic Spell”, Tolkien’s Middle-earth oeuvre began as an attempt to imagine the “lost tales” behind the scattered fragments of medieval literature. It was a hunger that scholarship alone could not fully satisfy. Tolkien’s view of Beowulf as a marriage of fairy story and history explains his rationale in constructing for his own grand fairy story a world so convincing in its “historical” detail that many feel they have been there.

is published by HarperCollins (£9.99)