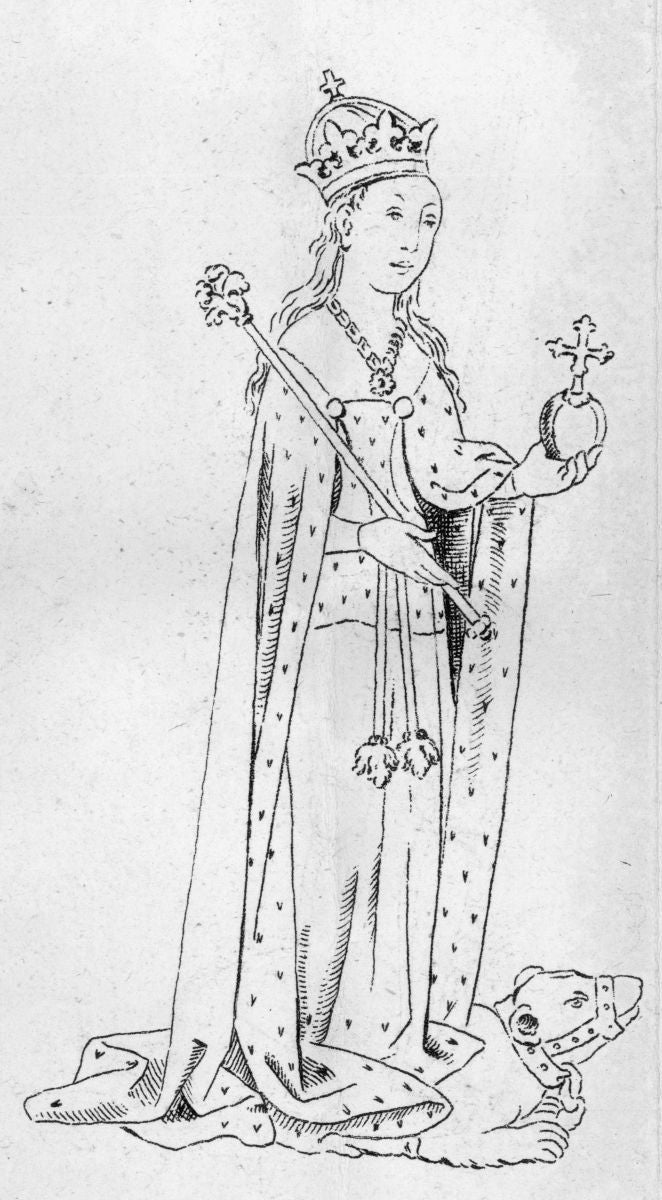 In some ways it seems strange to think of Richard III having a wife. Rather like Shakespeare’s abandoned spouse, it sounds like a poem written by Carol Ann Duffy to celebrate female love and loss. But this is largely because the domestic aspect of Richard’s life is comparatively unexplored and his wife, Anne Neville, has received little critical attention.  She has also suffered, like her husband, from literary misrepresentation. Yet she was a constant presence at his side and, as I theorise in my new book, potentially played a far more significant role in his seizure of the throne than has been imagined. Anne was not a wife of the “second best bed” variety – in fact, she was the joint recipient of Richard’s crown.

This is the woman who shared his home and bed, who bore his child and deputised for him on their Yorkshire estates; the woman who had known him as a teenager, practising his archery skills under her window, who had seen his boyish body transformed by the painful condition that bent his spine into a breathless curve. As his wife, she was probably the person who knew him best, so what exactly did she know? When it came to the unanswered questions of Richard’s reign, particularly his motives and actions in the summer of 1483, how far did he confide in her? Did she know the fate of the Princes in the Tower, the cousins of her own little boy? Did she condone her husband’s seizure of the throne? Who was this woman who stood so close to the king, yet seems so distant today?

While researching Anne Neville; Richard III’s Tragic Queen, I was forced to seek some answers. This wasn’t easy; dead by the age of 28, Anne didn’t leave much of a paper trail, despite having been married first to a Prince of Wales, then to a King. Reading about Richard’s life, you get a sense of a shadowy figure at his elbow much of the time, who did not commit her feelings to paper and inspired few surviving descriptions. Anne is something of a historical void and it has been customary for romantic fiction to fill it with anachronistic interpretations, designed to suit the sensibilities of a modern audience. This works well in novels but it is no use when it comes to non-fiction, where this caricature is also rearing its one-dimensional head. Because Anne was female and the teenage subject of an arranged marriage, she has been cast as the pawn of great men, the victim of their schemes and the fickle turns of fortune. But take a look at her contemporaries, the warlike Margaret of Anjou and Isabella of Castile, famous for their ambition and drive. Why shouldn’t the Anne-shaped void beside the King be filled in the same way?

Born in 1456, the second daughter and final child of Warwick “the Kingmaker”, Anne couldn’t have had a better model of ruthless ability to follow. Instrumental in the toppling of one king, in order to replace him with Anne’s brother-in-law, Warwick then reversed this process, dethroning Edward IV and restoring Henry VI when it suited him to do so. He was the most powerful English magnate, rumoured to have the king in his pocket. Which king? Well, both of them. He died in battle when Anne was just 14 yet his memory must have been lasting; it would be no surprise if his daughter felt a strong grievance against the family he had hated, the ambitious Wydevilles with whom he struggled for the final decade of his life.

In 1483, those Wydevilles were poised to take over the reins of power. When Edward IV died unexpectedly in April, his son by Elizabeth Wydeville was only twelve years old. The day was appointed for his coronation but the boy-king was never crowned. Historians have long disagreed over the motives of his uncle, Richard, who declared the king and his brother illegitimate, eliminated his enemies and assumed the throne. Yet perhaps they have been looking in the wrong place. Richard had given every appearance of loyalty until this time; of course, loyalties can change and appearances can be deceptive, but what of that shadowy figure at his side? With the accession of the boy king, Edward V, Anne was about to see the victory of her former enemies. Only 14 years had passed since Warwick had beheaded Queen Elizabeth’s father and brother and another brother, Anthony Wydeville, had prevented Warwick’s family from boarding their ship when trying to flee the country in 1470. Anne’s elder sister Isabel had been heavily pregnant at the time and lost her first child, Anne’s niece, on the journey.

After Warwick’s death, Richard had become the inheritor of the Earl’s titles, estates and role in the north; perhaps he and his wife of 12 years feared reprisals. At the very least they might expect Richard’s role to be curtailed and the reallocation of their properties and lands. In the days and weeks following Edward IV’s death, it is not impossible to imagine them plotting together about the best way to secure their future and that of their young son. Anne may even have egged Richard on, Lady Macbeth-like, urging him to action. Instead of being the passive “stand by your man” figure of so many novels, tossed about by cruel fortune and grieved by his villainy, she may instead have been a shaper of her own destiny, as a proud, ambitious, typical aristocrat of her day. Anne may even have masterminded the whole thing, the brains behind the coup, the female kingmaker.

Of course, there is no evidence to suggest this. But equally, there is no evidence to suggest the opposite. A quick glance at Anne’s contemporaries in the field of English politics – Queen Margaret of Anjou, Elizabeth Wydeville and Queen Mother Margaret Beaufort – instantly reveals alternative models of female strength. Perhaps it is as their foil that Anne has traditionally been portrayed as so weak. One thing we do know about Richard’s wife is that she deputised for him at least once, during his absence in France, representing the public face of his “good lordship.” A strong ambitious Anne is far more realistic given the necessity of survival and the protection of inheritance. She had already been married to the enemy, in the form of the Lancastrian Prince Edward of Westminster, then lived through uncertain times in which she lost her husband, father and father-in-law. She was taken prisoner, brought before Edward IV and kept in the custody of her sister, which she escaped in order to make a marriage of her own choosing. When she became queen, she was a fully grown woman of 26, and it seems she was in good health almost her entire life, as there are no records of her illness until three months before her death. In spite of this, in the popular imagination, she has remained stuck as a docile teenager, mistakenly reputed to be sickly and ill, to better suit a romantic narrative. How wrong we could be.

Then there are the Princes in the Tower. Following the publication of Josephine Tey’s popular novel The Daughter of Time, the finger of blame has been firmly pointed at Margaret Beaufort, who reputedly killed the boys to secure the succession of her own son, Henry VII (although he did not manage to invade successfully for another two years). But what about Anne? She arrived in London in early June 1483, around the time of the last sighting of the Princes, and she had every reason to ensure that her husband’s coup went unchallenged and that her own son would inherit. She would also have had access to the Tower and we know she followed tradition by staying there with Richard on the night before their coronation, early in July. If Margaret could do it, why not Anne?

Personally, I don’t think Anne did kill the boys, but the fact that she has never been accused of the crime is typical of the way she has been infantilised by the process of history. She must have been too sickly and insipid to carry out such a deed, surely? Queen Anne has not been overlooked by history, she had been as miscast as her husband is in Shakespeare’s play. Yet she was bred with the anticipation of a high status match, if not actual queenship, and what Fifteenth Century noblewoman wouldn’t have embraced the opportunity to wear the crown? It is time to reconsider our preconceptions and place Anne back firmly centre stage as a main player, if not a driving force, in the life and “usurpation” of Richard III.