Niall Ferguson has written the cover story in this week’s Newsweek slating Obama for his economic performance, and forcefully arguing against the president’s re-election.

In his inaugural address, Obama promised “not only to create new jobs, but to lay a new foundation for growth.” He promised to “build the roads and bridges, the electric grids, and digital lines that feed our commerce and bind us together.” He promised to “restore science to its rightful place and wield technology’s wonders to raise health care’s quality and lower its cost.” And he promised to “transform our schools and colleges and universities to meet the demands of a new age.” Unfortunately the president’s scorecard on every single one of those bold pledges is pitiful.

But much of the article reveals that it is Ferguson himself who is pitiful. The people slating him may largely be the usual suspects, but their criticisms still hold.

Noah Smith points out that the very paragraph quoted above, the third in the entire piece, isn’t quite accurate:

I’ll just quickly note that the American Recovery and Reinvestment Act contained substantial funding for infrastructure. So Ferguson, when he says that Obama has not built infrastructure, is simply asserting something that is not true. In the parlance of my generation, he is “spouting BS”.

Paul Krugman, for instance, argues that Ferguson offers “just a plain misrepresentation of the facts” when discussing the effect of healthcare reform.

The president pledged that health-care reform would not add a cent to the deficit. But the CBO [Congressional Budget Office, the model for our OBR] and the Joint Committee on Taxation now estimate that the insurance-coverage provisions of the ACA will have a net cost of close to $1.2 trillion over the 2012–22 period.

The passage reads as though Ferguson is saying that the CBO thinks Obamacare adds to the deficit, when in fact they say the exact opposite; the insurance-coverage provisions cost money, but they are funded by other measures in the act. It’s difficult to work out whether Ferguson is deliberately misleading or just mistaken, but either way he’s wrong.

Similar weirdness happens with his arguments over America’s comparative performance. He writes:

The failures of leadership on economic and fiscal policy over the past four years have had geopolitical consequences. The World Bank expects the U.S. to grow by just 2 percent in 2012. China will grow four times faster than that; India three times faster. By 2017, the International Monetary Fund predicts, the GDP of China will overtake that of the United States.

Illustrated with this chart: 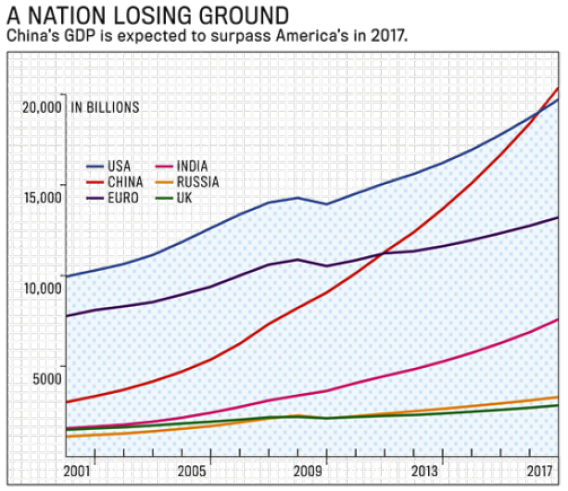 Both Matt Yglesias and Joe Weisenthal pointed out that it’s a tad unfair to blame Obama for the fact that the BRICS are growing faster than America.

Ferguson is implicitly making two points with this graphic and it’s difficult to know which of them is more absurd—the idea that Obama is responsible for rapid economic growth in China or the idea that if he were responsible that would be blameworthy.

It even hits Obama for stuff like this, which seems totally inevitable at some point, regardless of who is President.

Weisenthal also focuses on Ferguson’s shoddy prior record when it comes to economic forecasting, concluding:

Bottom line: Ferguson has made some big calls about economic collapse ever since Obama took over. As he declares that Obama has been a failure, note that those own calls in recent years have been off the mark.

Of course, as Paul Cotterill wrote last week for the New Statesman, Niall Ferguson isn’t actually the best economic writer around. Or really that good at all. Discussing his Newsweek article on the Indian blackouts, Cotterill concludes:

For Ferguson simply to set the long term consequences of colonialism to one side, in favour of a simplistic view of why India is where it is now – a paradox not of its own making – confirms his fall from decent historian to celebrity charlatan, interested more in soundbite opportunity than in real economics and history.

Just a week on, it seems Ferguson has proved that suspicion correct.

Ferguson has responded to Krugman’s criticism with an excuse which boils down to “I didn’t lie, I deliberately mislead my readers!”.

I very deliberately said “the insurance coverage provisions of the ACA,” not “the ACA.” There is a big difference.

Brad DeLong, at least, is not having it:

Now comes Ferguson to tell us that he lied.

Now comes Ferguson to tell us that his “But” at the start of the second sentence in the quote is completely, totally, and deliberately false. . .

And his only excuse–now, it’s not an excuse for the lie, it’s a “I can lie cleverly” boast–is: “I very deliberately said ‘the insurance coverage provisions of the ACA’, not ‘the ACA'”.

Fire his ass from Newsweek, and the Daily Beast.

Convene a committee at Harvard to examine whether he has the moral character to teach at a university.

There is a limit, somewhere. And Ferguson has gone beyond it.