The biggest and most important global story of recent days captured in two words: second wave. But both of those words give a misleading sense of how the global Covid-19 pandemic is actually developing.

Let’s start with “second”, which only really describes the infection rate in a few countries. Most notable among them is the United States, where a first wave of daily new cases peaked at about 36,000 in late April, before they fell to a low of 16,000 at the start of June. Since then they have risen in a second wave to a new peak of 44,726 on 26 June. Even there, the national numbers smooth out 50 very different curves in the individual states. In New York and Michigan, for example, numbers peaked in April and, at least partly thanks to decisive leadership by governors Andrew Cuomo and Gretchen Whitmer (profiled by Sophie and Emily here and here), are now at or close to record lows. Elsewhere, especially in southern states like Florida and Texas where numbers were stably low during the spring, Covid-19 is now surging. 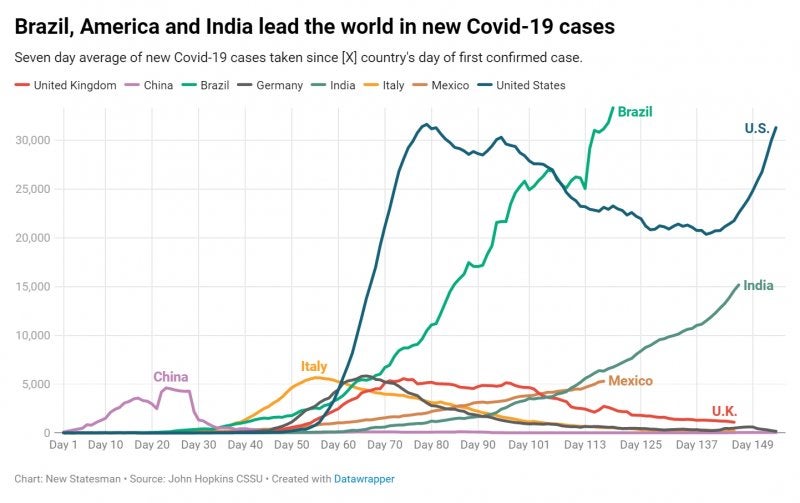 America’s trajectory is only one of about four broad international patterns. The second describes those countries, including the UK, Russia, Sweden and Portugal, where the infection rate has peaked but is declining relatively slowly or barely at all. The third covers those where it has peaked and fallen a long way but where concentrated outbreaks in particular areas are nudging or threatening to nudge the numbers back up. A new outbreak in Beijing two weeks ago pushed China’s curve up slightly but seems to have been contained. In Germany several highly localised surges, most notably in a meat packing plant, have increased the national R (reproduction) rate. A similar story in South Korea has been partly linked to spreading-events in Seoul nightclubs. It remains to be seen whether these incidents – notably, in countries credited with having best squashed the “first wave” of the crisis – can be contained.

The fourth pattern is where the first wave continues to rise with little or no interruption. This is particularly common in the world’s poorer countries. India went into lockdown on 22 March and has now largely come out of it, but the rate of new cases is still rising smoothly; each day this week hitting a new record. That pattern is especially prevalent in Latin America, which now accounts for around half of daily Covid-19 deaths globally. Numbers are soaring in Chile, Mexico and Peru, but most dramatically in Brazil – where the first wave never fell, but merely stabilised in early June before rising again. For more on the Brazilian disaster, read Nick Burns’s profile of president Jair Bolsonaro’s handling of the crisis.

Talk of a “second” wave in such countries is at best misleading and at worst diminishes the brutally unrelenting rise of their infection rate. Notably, the global infection rate conforms unequivocally to this fourth pattern: it rose fast, stabilised somewhat around 80,000 daily new cases in late April and early May, before rising again through May and June to 179,834 daily new cases on 27 June.

Which points to the problem with the second word: “wave”. It implies a sort of repetitive cycle: rising infections, a gradual tightening of lockdown restrictions as governments and citizens wise up, a period of concentrated strain on health systems, then a fall in numbers and a gradual reopening until the infection starts to spread outwards again. Talk of a second wave suggests there will be multiple iterations of that same cycle until a cure and/or vaccine are found. Yet this too is misleading. There are a number of factors that will dictate the character of further or continued outbreaks and which suggest not a predictable cyclicality but an unpredictable linearity.

The politics of the pandemic, for one thing, is not iterative. Some incumbent leaders such as Angela Merkel and Giuseppe Conte have received a boost as voters have rallied to authority, especially where those leaders are perceived to have handled the crisis well. Others have seen their support tumble: Donald Trump for example is down in polls against Joe Biden while Bolsonaro’s approval rating has also fallen. In Belarus, writes Felix Light, “Europe’s last dictator” Alexander Lukashenko’s cartoonish response to the outbreak (suggesting tractor driving, vodka and visits to the sauna as remedies) is fuelling dissent and protests ahead of a presidential election in August. Around the world, the potential for a “hot summer” of protest and even violence in the febrile atmosphere of post-lockdown, pandemic-scarred societies is high. Governments may yet fall.

So the politics does not move in waves. And the politics, as we have seen, profoundly affects the course of the pandemic itself.

Another non-iterative factor is countries’ ability to contain the virus. With time, governments are getting ever-better at monitoring its spread. Here in Germany, a voluntary contact-tracing app has been downloaded over 13 million times. Internationally, testing infrastructure too is only improving.

These positive linear trends are counterbalanced by a negative one. As the pandemic goes on, the public’s willingness to cooperate will surely evolve too. Not many countries have the techno-authoritarian infrastructure that enables, say, Singapore and China, to minutely monitor and coerce necessary behaviour. Some form of public buy-in is needed. How will obedience to advice on masks, hand washing and social distancing evolve? If containment measures fail and a second mass lockdown is needed, will citizens enjoying their newly restored freedoms really consent to it? And can societies cope with the economic burden of another artificial depression? A new study by the Brookings Institution projects that the combination of rising infection rates and widespread “lockdown fatigue” this autumn would see the US death toll hit 450,000 by January.

Finally, any treatment or vaccine will not be a cycle-ending moment, as often seems to be imagined, but a process. There may be multiple versions of both and they may work well or patchily. They will need refinement, will need to be produced and distributed and will probably be the subject of political and even diplomatic disputes over ownership and priority of access. The virus could mutate, requiring successive vaccines and treatments to be produced. There will be steps forward and steps back, prompting frustration – even despair.

When we talk about a “second wave” we do not really mean a second bell-curve, rising and falling on a chart, but a new psychological phase in the pandemic. We have got used to the idea of it now and can see – from varying infection patterns around the world – that it will not go away easily and is continuing to spread. That places us in a new period, one defined by the traumas, lessons and collective epidemiological, political and economic baggage of the time before, when the virus was still new and unknown. So don’t call it the second wave of Covid-19. Call it the second phase of Covid-19.

@JeremyCliffe
Jeremy Cliffe is international editor of the New Statesman.