Nepal is a long strip of a country, with mountains rising like shark’s teeth, larger and larger, as you go north. The southern side, by contrast, is low-lying. Instead of crisp mountain air, there is fog and swelter. Our morning flight out from the capital, Kathmandu, was delayed for more than an hour while the air became clear enough to land. Even then it was smoggy enough to force me into repeating my nervous-flyer mantra: It’s just a bus. They do this every day. The pilots don’t want to die either.

I had travelled to Nepal with a British charity, Room to Read, whose mission is to improve child literacy. Our destination was a small city called Nepalganj, home to about 70,000 people, which is just north of the border with India. The Lonely Planet guidebook had warned me not to expect much. “With its oppressive heat and dust, many see it as a necessary evil on the way to somewhere else. And they are quite right…It doesn’t improve upon close inspection.”

The guide was right about the heat; in summer, the temperature in Nepalganj is often more than 40°C. The last bit, however, was incorrect. As we drove out to rural schools through the Banke and Bardia national parks, we saw crocodiles lazily sunbathing on an island; a turtle swooping through the water next to a dam; monkeys chattering and bouncing by the side of the road. I was startled to see a peacock in one hedgerow – who could imagine a creature that preposterous surviving in the wild?

I saw it all with a city-dweller’s wide eyes, but a landscape that seems “unspoiled” to tourists often feels like bloody hard work to its residents. Many Nepalis move to dusty, trash-pocked towns such as Nepalganj because trying to make a living off the glorious, gorgeous land is back-breaking labour, with insecure wages and constant threats.

I would have cried with happiness to see an elephant; the Tharu family we met in a small village in Bardia would have been equally happy never to see one again. Their house had been destroyed by the animals three times in the past few years. They are technically squatters with no rights to the land, so there was no compensation. As for Nepal’s famous tigers? The cubs snatch their goats, depriving the family of milk and meat.

Sangita Tharu, a 21-year-old enrolled in Room to Read’s girls’ education programme, showed us her house. It had yellow mud walls, and the living room (which also contained her parents’ bed) was dominated by a huge grain silo. The four children slept upstairs on a rickety mezzanine level. I surprised myself by turning round and coming face to face with a nesting chicken, clucking in a basket hanging from the wall. Further chickens pecked away in the yard. The family ate meat only once a year, Sangita said, in the Tharu New Year in January: a roll made of maize, filled with pork. The rest of the time, their standard meal was rice and maize porridge, and one roti each.

Like many Tharu people, Sangita’s family did not own any land of their own; they depended on a “landlord” to lease them an area to farm, in return for sharing half the grain. Even that wasn’t enough to sustain the family, so her parents also worked as day labourers on other people’s land. Even that wasn’t enough, so they had to send their children away.

Among Nepal’s poor families, the boys can travel to places such as India or the Gulf states, where wages are higher, to work and send money home. Girls cannot, and so they are seen as less economically valuable. Even though most women in rural communities also help with harvesting and other tasks, the worldwide, systematic devaluing of domestic and caring labour – because it does not generate income – means that girls are treated as lesser beings.

Sangita used to be a kamlari, or female indentured servant. When she was ten years old, the landlord turned up when her parents were out in the fields. “My aunt fed me lunch and I went away,” she told me. What, without saying goodbye? “Yes. I was hesitant, but the landlord said: you’ve already called us.” They walked to a checkpoint an hour away, then took a bus to Nepalganj. When she arrived at 5pm, there was another kamlari in the house already. She had not even taken any clothes with her.

Nepal has 123 languages, and when Sangita arrived at the landlord’s house, she spoke only a little Nepali, having used her own language, Tharu, at home. (This language barrier made interviewing Sangita’s mother, who spoke no Nepali at all, a laborious process. I asked a question in English, my guide Rishi translated to Nepali, and a local woman translated it to Tharu. Then her answer came back to me the other way.)

Sangita was embarrassed not to speak Nepali better, and the family screamed at her when she didn’t use the proper honorifics. She came back to visit her family once a year, and later transferred to a house in Bhurigaun, when her parents needed to buy rice on credit.

The practice of kamlari was outlawed in 2002, but news travels slowly in rural Nepal. It was only when social mobilisers from a local charity turned up at Sangita’s parents’ house that her mother called her and said: there are organisations who can help you. “The landlord said: no, you’re not going,” Sangita told me. “But one fine day I locked up everything, gave the keys to the house next door, and came home.”

Sangita then enrolled in a “bridge class”, designed to make up for the years of schooling she had missed. She hoped, she told me, to help other former kamlari. She was currently combining her studies with day-labour, but had worked for two months with the police during the recent elections. 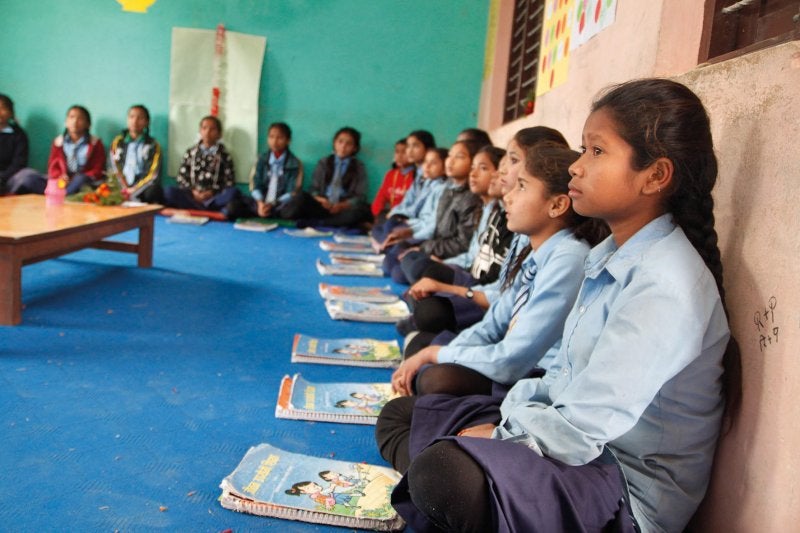 Room to Read works across south-east Asia and sub-Saharan Africa, targeting countries where the charity feels it can help. That means places with relatively stable infrastructure and no bloody civil wars, but their own unique challenges.

In Nepal – as in Uganda, which I visited in 2016 with another charity, Promoting Equality in African Schools (Peas) – female literacy is a particular problem. Since girls aren’t valued as highly as boys, they get worse schooling. That in turn increases their chances of being married off and taken out of education altogether. Across the world, girls who complete school have higher lifetime earnings, fewer children and a better chance of giving their own daughters a good start in life. Things are improving – in 2013, half of women in Nepal were illiterate – but inequality remains. According to Unicef’s 2015 figures, 89.2 per cent of males aged 15-24 are now literate, but only 77.5 per cent of females.

The young women I spoke to reported that their brothers were given the best toys and larger portions of food. If a family has enough money to send only one child to a private school, that child will almost always be a son. (Government schools suffer from poor funding and a lack of teachers.) Girls are kept home from school to do chores, not provided with the exercise books and materials they need, and often they are married young, leading to high dropout rates. A young wife of just eight or nine is vulnerable to the same pressures as a kamlari.

“In a household where there is a male and a female child, the girl is given a lot of housework while the boy is allowed to go out and play,” Dil Kumari Chaudhary, a social mobiliser, told me. “My parents didn’t send me to school, but to work in another person’s house. I was seven.”

Chaudhary slept on an old torn sheet below the stairs, getting up at 4am to wash, cook and clean. Her duties also included giving the “landlord” and his wife massages. (Anti-kamlari activists convinced the landlord to let her go home when she was 13.) It is easy to see how the kamlari system can lead to neglect and abuse. Girls who live, in effect, as slaves – or, at best, hostages for their parents’ debts – are vulnerable and unprotected. Another social organiser, Anisha Tharu (the surname is common in the community) told me that she had been sexually harassed by her landlord and his sons, and ran away. She didn’t see the point in being angry about the past – “what has happened, has happened” – but she was determined to help other girls.

Room to Read’s programmes watch out for girls who are at risk, visiting their families if they skip school for three days, fail exams or do not turn up for life skills sessions. I watched Chaudhary lead one of these classes, teaching girls about sanitary towels and what they can expect when they get their periods.

When I left her family’s house, Sangita told me that she felt optimistic, and perhaps she was right. If the promise of politics is that each generation should live better than the previous one, then a glance at her mother showed how far Sangita had come. A short, sun-toughened woman, Basmoti Tharu was 43 or 44 – she couldn’t be sure – and had been married at eight or nine, before her first period arrived.

What would you want my readers to know, I asked her? The chain of translations began, and eventually Basmoti’s answer came back: “They should send their daughters to school, and not let them get married too young.”

To donate to Room to Read, visit: roomtoread.org