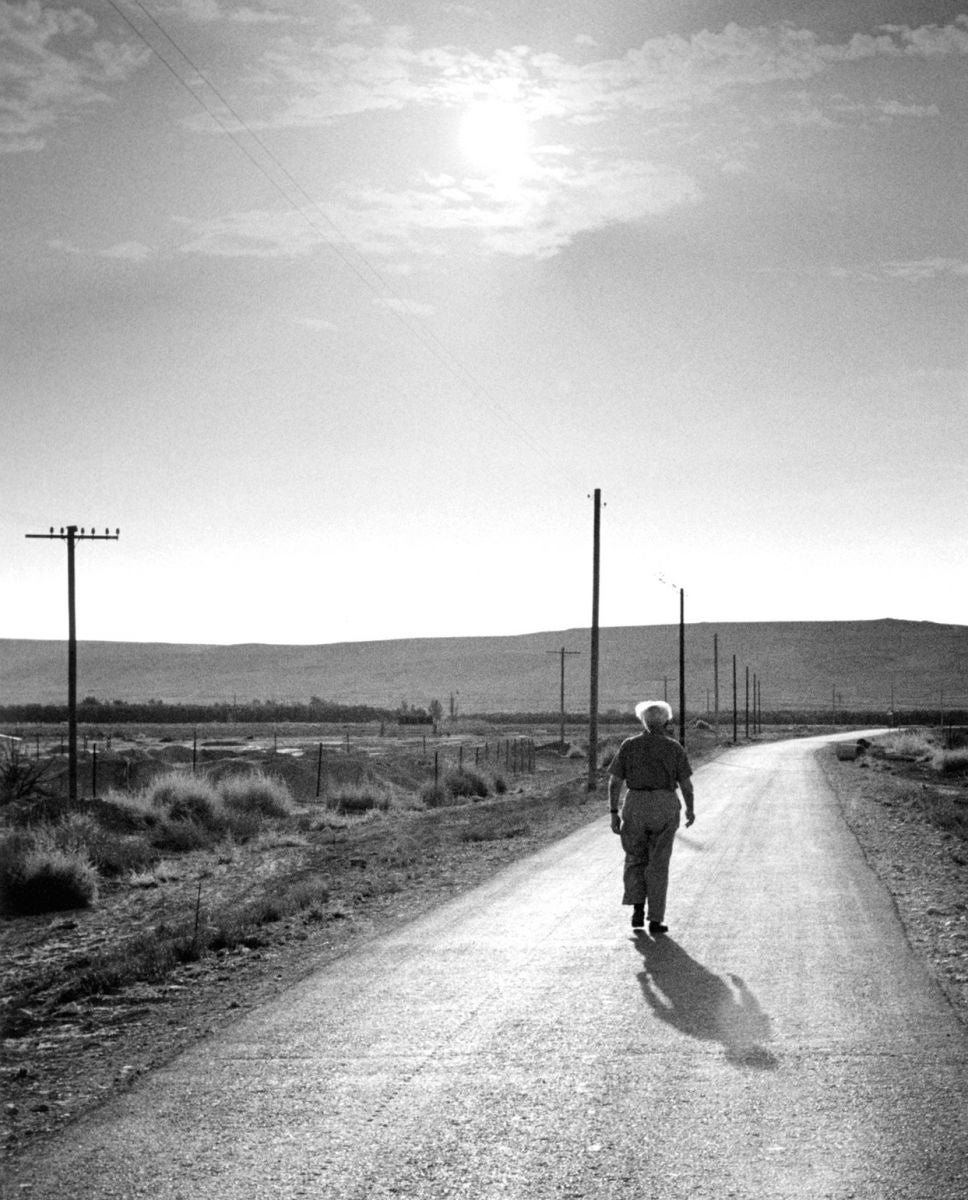 “Trees shall grow here”: Ben-Gurion, pictured in December 1953, after he first stepped down as Israeli prime minister and moved to a settlement in the desert

This unsigned article was first published in the New Statesman and Nation of 10 December 1955.

When David Ben-Gurion abdicated the premiership of Israel to retire to a hermitage in the biblical wilderness of the Negev, the people who saw him drive off into the desert were in tears.

Some said that his gesture in 1953 was just showmanship; others said that it was intended to make the conflicting elements within his cabinet realise that he was indispensable; others, that it was his disgust at having to sacrifice so many of his Socialist principles to win the dollars of American Jewry; others, that it was his never-ending quarrels with the Orthodox Jews; it was also said that his retirement was a reproach to the rich “squatters” who preferred the easier life of the cities to the hard work of building Zion; or to the kibbutzim, which had become selfish in success; and to the youth of Israel in danger of becoming “Levantinised”.

All of them, in a measure, were right. It was a gesture of disgust and challenge. That it was only a gesture has been shown by his return to power, to head a government in which the elements of dissension still remain. But in that gesture is a clue to the character of Ben-Gurion—the hard-boiled mystic, the modern Maccabean.

Typically, he chose Sde Boker—“The Field of the Cattlemen” in the bad lands of the Negev, where marauders ferrying between Egypt and Jordan across the dusty desert set life at hazard. It was a non-political, non-religious kibbutz of young people, dedicated to recovering the desert by modern means. There, he and Paula, his wife, had their hut, indistinguishable from the other ply-board huts, except that it had an addition—a room for his books. The books provided another clue to this contradictory man—a man who lived within gunshot of Israel’s enemies and who built himself a sanctuary behind books; books of the ancient philosophers, Greek, Roman and Hebrew; books which had drawn him from Israel, even in its perilous days, so that he might browse, incognito, in the Charing Cross Road bookshops of London; books which were certainly not the nursery books of an infant state.

Ben-Gurion was born David Green, 69 years ago, son of Avigdor Green, unlicensed lawyer in the Polish town of Plonsk. An eleven-year-old boy, Chaim Weizmann, was then living in Pinsk, 200 miles away. Historians may argue, with less acrimony than Jewry now does, which of those two children of the Pale created Israel; they may decide that, while Weizmann was the architect, Ben-Gurion was the builder. At 19 David migrated to Palestine, a zealot for Zionism, trade unionism and Socialism.

He became a farm-labourer and, immediately, a leader of the Workers-of-Zion. He was a Socialist, fighting the charity-subsidised Jewish farmers who preferred to employ cheap Arab labour rather than the zealots of their own faith. The scars of the experience permanently affected the character of the later Ben-Gurion. He never lost his resentment of the “rich squatters” (as he has called them) who want to make Israel a middle-class Zion. Like the settlers at Sde Boker today, the colonists of Sejera, where the young David worked at the plough, kept their guns within reach among the hostile Arabs. For 50 years, Ben-Gurion has lived as the resented intruder.

His is a turbulent story. First the ploughman who went to Constantinople to study Turkish law, that he might outwit the pashas and the effendis and win a foothold in Zion from the Turks. Then the corporal in the British army in the first world war, fighting for the promises Weizmann had won in the Balfour Declaration. Then the builder of Histraduth, the trade union movement of Israel, which he not only made the backbone of a political party (now the Mapai) but turned into a contracting co-operative to build and run factories and compete with private employers who resisted trade unionism. Then as a reluctant conscript to the councils of world Jewry—reluctant because he felt his place was in Palestine and because he resented the attitude of those Jews of the Diaspora, who, only part-assimilated, seemed to regard Zionism as a movement to send others to Palestine.

On May 14, 1948, the state of Israel came into being. At midnight, the Mandate was to come to an end but at dusk it would be the Sabbath and Ben-Gurion could not wait. At five o’clock in the morning, while he was broadcasting from what, the day before, had been an illegal broadcasting station, Egyptian Spitfires bombed Tel Aviv and the new state was at war. That it survived that war, with a circle of enemies around it and dissensions within it, was due to the man who was its self-appointed leader who, with battles raging round him, had to learn the elements of war. He was himself Israel’s GHQ; by artifice and the strength of his personality he directed Israel’s forces. They included Haganah, the more or less disciplined force, Palmach, the shock troops of the left-wing faction, Irgun, the extremists and the Stern Gang. In what seemed a miraculous triumph, Old Testament Israel was reborn.

During the United Nations’ truce, Ben-Gurion showed his relentless strength. Irgun tried to bring in a munitions ship, the Altalena, in defiance of the truce conditions. Ben-Gurion reasoned with them and they defied his authority. When the ship appeared off Tel Aviv, it ignored the signals of the Haganah batteries, which obeyed Ben-Gurion’s instructions and fired. The ship burst into flames. In those flames were destroyed, according to Irgun, four million rounds of ammunition, 5,000 rifles, 1,000 grenades, 300 Bren guns, 400 aerial bombs, nine tanks and 50 anti-tank guns—munitions desperately needed for the war that was to be resumed. But Ben-Gurion kept the truce, and he suppressed Irgun—except in Jerusalem, where it was to strike again and defile the infant state with the assassination of Count Bernadotte, the UN mediator.

When the war was resumed, and ended, Ben-Gurion was head of a state, which the powers had to recognise and the United Nations had to accept in membership. It was not the state which the United Nations had proposed in its plans for partition and which many Israelis have since realised would have been more manageable. If it had not been for Ben-Gurion’s obsession with the Negev, the Jewish armies might have cleared the hills of Samaria and removed that bulge which nearly divides Israel. Instead he insisted on pushing his columns south across the empty desert to the Gulf of Akaba, to conquer a desert which never figured in pre-Israel maps of Palestine.

Ben-Gurion believes that that desert contains mineral wealth for Israel and that it can be made to “blossom as the rose”. To prove that he is right, money has been poured into the Negev, which some say would have been better spent elsewhere. When, standing in the empty desolation around Sde Boker, he stamps his foot in the thirsty dust and, like an Old Testament prophet, proclaims, “Trees shall grow here,” he means it.

Such a man can be intolerant and hard in his relations with others. His relations with Chaim Weizmann were never generous. They could not understand each other. Weizmann, patiently wrestling with statesmen, believing in gradualness and diplomacy, was ready to accept the National Home under tutelage of the British Empire; Ben-Gurion, the man who had ploughed with his rifle by his side, was ready to grasp the independent state in defiance not only of the Arabs, but of the whole world. When Weizmann, acknowledged successor to Theodor Herzl as leader of world Zionism, was made president of the new state, Ben-Gurion insisted: “All honour but no power.” Ben-Gurion avoided a written constitution to prevent the spelling out of the religious sanctions of Orthodoxy. The first president bitterly resented the by-passing of his authority and the reconciliation came only when he was dying.

Ben-Gurion, with his life in danger from thrombosis, is back in power at a perilous moment in the brief history of the state of Israel. He is the man of destiny. Once again he is beset by threat of war by the Arab states. This country now contains a million more Jews than when it was attacked before. They have been brought from the four corners of the earth: Oriental Jews now outnumber the Occidental Jews. He wanted to fill the country, but he hoped that the existence of the state of Israel would attract the great men of Jewry—administrators, scientists and the like—but he has been disappointed. Even Einstein, whom he admired above all living Jews, rejected his invitation to become Weizmann’s successor as president, and lesser great men have given him and his state their blessings but not their services.

This unbalance, which Ben-Gurion had not foreseen, is a critical factor. Before he has assimilated these Jews, with 47 different languages, before he has adequately trained and merged the young, there is danger of war. But, he knows that there are also dangers of peace. It is the continuing threat to the infant state which makes world Jewry dip deeply and keeps the very different elements of Jewry together. And it keeps them from becoming “Levantinised”, which is Ben-Gurion’s word for his nightmare—his people becoming like their neighbours.