Back in June, cabbies in cities including London, Berlin, Paris and Madrid went on strike to protest against Uber: a taxi firm-cum-social networking app that links smartphone users to private drivers. The cabbies said they were protesting against a dangerous lack of regulation; everyone else thought they were protesting the rise of a competitor.

That rise, though, has continued unimpeded, and over the last week, two things have happened to highlight it. The first is best summed up by this screenshot of Google Maps, taken from an Android phone: 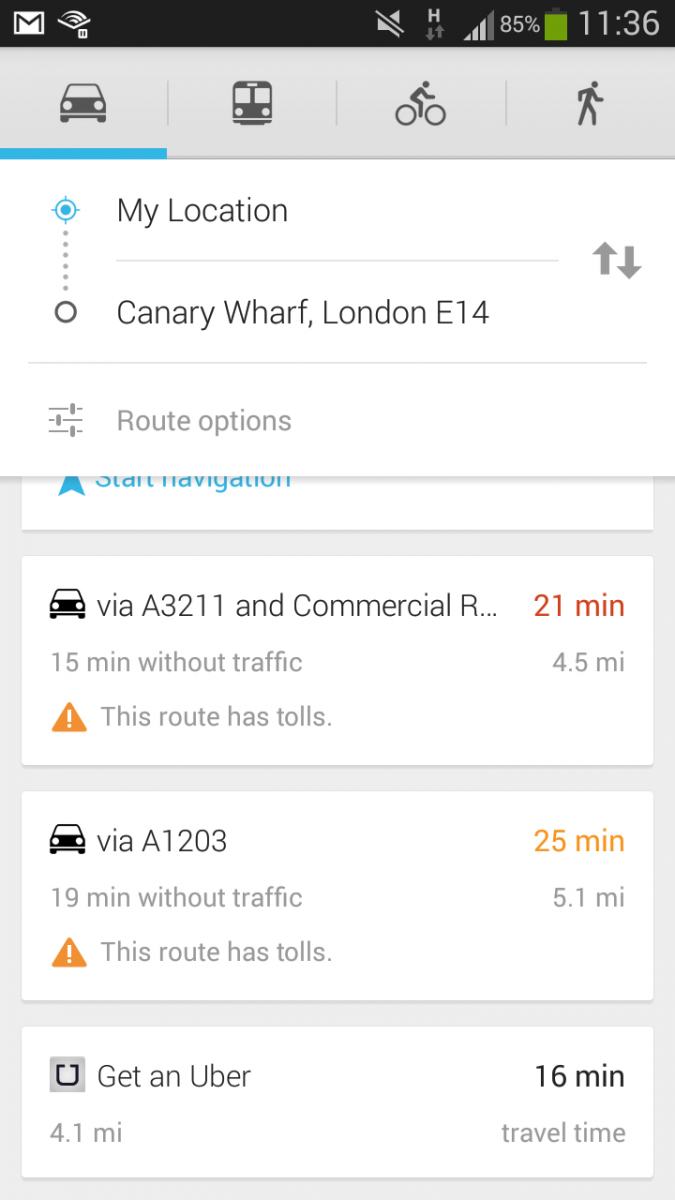 Look at the last item on that list: ask for directions, and the map automatically offers you the option of taking an Uber car. Click that button, and it launches the app.

This is not perhaps as surprising as it seems – Google Ventures invested $258 million into Uber last year, in the largest such deal the internet giant has yet made. What’s more, this functionality is not universal – if you don’t have the app, you don’t see the button, and our limited sample size shows it’s not appearing on at least some iPhones yet, either. But it is, nonetheless, quite the win for a taxi firm to get itself integrated into the world’s biggest mapping app. (Team-ups between taxi apps and transport apps are quite the zeitgeist at the moment: last week Hailo announced its integration into CityMapper, too.)

The other piece of news is rather less world-shaking – and may even highlight Uber’s limitations. For the next five weeks, a section of the G train of the New York Subway, which links Brooklyn and Queens, will be closed for repairs. That means a two mile gap in the network, from Court Square to Nassau Avenue.

For commuters, this is a pain; for Uber, it’s an opportunity. The firm has released a promo code which geographically challenged New Yorkers can use to get one free ride to plug that gap. This is quite obviously not a long-term replacement for regular commuters – but it might encourage people to download the app and give Uber a whirl. Effectively, the firm is giving out free samples.

There is, however, a twist. The journey that the promo code covers is, Uber reckons, worth an average of $14. But the exact price of that fare will vary because of the firm’s use of “surge pricing”. At times, an Uber car can be very good value, but the more demand there is, the more expensive they become. To take account of this, the firm has given its voucher a value of up to $30.

But this, remember, is a journey of just 1.5 miles: you could walk it in half an hour. According to TaxiFareFinder.com, that should cost you about $9.41. What Uber is telling us is that its cars can sometimes cost three times as much as a yellow New York cab.

Uber claims that it’s now cheaper than taxis – and, sometimes, it is. But at other times, it’s a lot more expensive. This free sample may, paradoxically, remind everyone of this fact.