Over the last few weeks, you could be forgiven for having failed to register a diplomatic row within Europe that has left two embassies emptied and led to an emergency meeting at the EU.

It is worth examining the chain of events that has led to this swift rise in tensions between Sweden and Belarus: Alexander Lukashenko became President of Belarus in 1994; he maintained power for 18 years by allegedly rigging elections and using his Soviet-legacy KGB to imprison and often torture members of the opposition, journalists and human rights activists; on 4 July this year a Swedish PR firm flew into Belarusian airspace and dropped 800 teddy bears with parachutes carrying pro-democracy slogans. President Lukashenko’s reaction was to arrest two Belarusians – one a student who had posted photos of the bears online, another an estate agent who had considered renting an apartment to the Swedes involved but in the end, well, didn’t.

This provoked outrage from human rights and freedom of speech campaigners across Europe who have since been holding a range of protests and solidarity actions to draw attention to the absurdity of the situation. Turning it into a national security issue, Lukashenko sacked two of his top generals – those in charge of air defence and border control. Since this only drew more attention to the event, he went on to effectively expel all Swedish embassy staff from Minsk and withdraw his own embassy from Stockholm, destroying diplomatic relations between the two countries and creating an international news story out of what was, essentially, a publicity stunt.

Lukashenko then gave nearly two weeks for the story to fade away before dismissing his Foreign Minister on Monday. This was presumably intended as a face-saving move before he inevitably invites the Swedish embassy back to Minsk but has essentially brought the whole saga back into the spotlight by his sheer obstinance.

(It should be noted that Lukashenko claims that the closing of the embassies is unrelated to the teddy bear drop, but he also claimed the bear drop had not taken place, even weeks after Anton Suryapin and Syarhei Basharymau were arrested.)

Meanwhile Russian state media has made a lot of noise blaming Sweden for its provocations while the EU has condemned Lukashenko’s actions and agreed to consider extending existing sanctions in October.

The attitude of the UK Government towards President Lukashenko’s regime tends to be tacit condemnation. In the past the Foreign Office has taken a side against the Belarusian government only when pressed; the most noteworthy reaction they have so far given to the closing of the Swedish embassy has been a tweet from William Hague to Swedish Foreign Minister Carl Bildt: 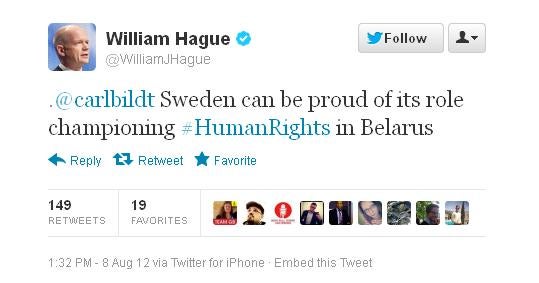 Essentially, the UK Government’s position has always been “leave it to the EU”. Soon however that attitude will not be enough.

Apart from Lukashenko’s blunders, the long drawn out saga created over this has partly been due to chance timing, and there is no indication that this will change over the next few weeks.

The dust will still be settling from the diplomatic row, the PR company Studio Total will be continuing to maximise its hard-earned publicity and human rights groups will be trying to use the rise in tensions to gain support for the release of political prisoners when election time comes to Belarus in September.

Belarus’s 2010 elections saw mass protests, widespread accusations of tampering and the arrests of hundreds of activists – there is little reason to expect these will go any differently. Even with a boycott planned by many opposition groups, there will almost inevitably be violence and a brutal crackdown as seen two years ago. After the recent row with Sweden, Belarus is more isolated than ever. Next month Lukashenko will most likely consolidate his place as a pariah of European politics and there is little knowing what the diplomatic outcome could be.

While remaining comparatively aloof from the situation in Belarus in general, Britain has earned Lukashenko’s displeasure recently by upholding the EU travel ban and barring the notoriously competitive dictator from watching his team’s success at the London Olympics. The President has proven himself to be incredibly temperamental, skewed in political judgement and therefore unpredictable. Events are likely to come to a head next month and once again put Belarus at the forefront of European politics, and it seems unlikely that the British government can remain detached for much longer. This may be wishful thinking on the part of an activist, but it seems almost inevitable that we could soon see our government take some small but genuine stand in support of democracy and human rights, whether they want to or not.