Donald Trump has today shown that he is a master satirist by appearing to credulously retweet a joke news story about his opponent.

The president, whose administration is a four-year-long Dadaist art-crime created to shatter consensus reality, retweeted a “news” item by satirical website the Babylon Bee, which claims to have been running for 6,000 years and describes its reporting as “fake news you can trust”. The article in question reports that Twitter had closed its entire social network and destroyed all of its servers, with hammers, in order to prevent negative coverage of Joe Biden from spreading.

“Wow”, observed the 45th President of the United States, before (correctly) noting that “this has never been done in history”.

This is of course a joke, and a very relaxing and fun one at that. Because if it wasn’t a joke, you’d lie awake tonight thinking about the fact that a man with the power to end human civilisation is not capable of grasping that if Twitter had destroyed all its servers, it wouldn’t be possible to tweet about that.

The 2020 US presidential election in data: why the Trump revolution will live on

US presidential election 2020: why voting is often so difficult 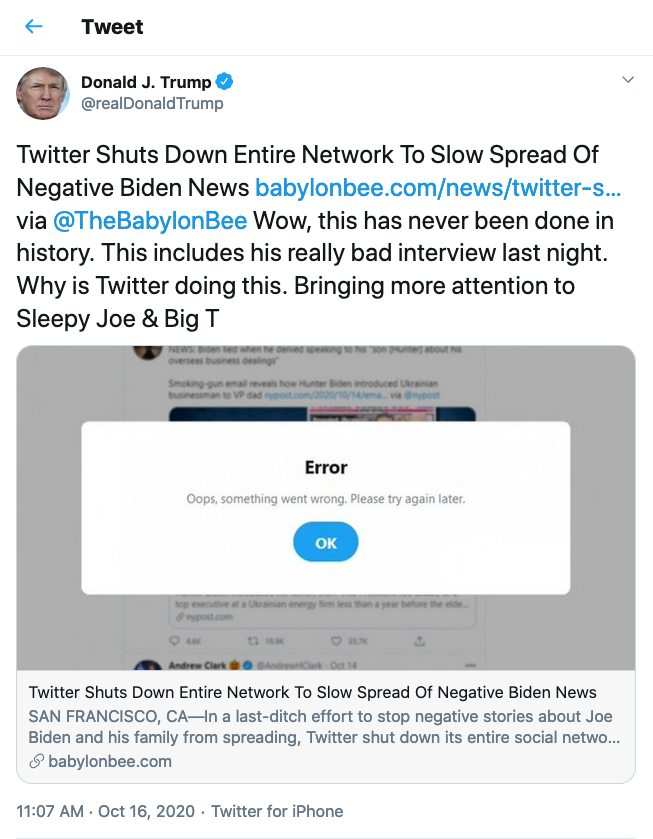 The article in question, which Donald Trump definitely read before posting his clever joke about it, describes Twitter CEO Jack Dorsey “smashing as many computers as he could” with a sledgehammer to prevent coverage that might damage the Biden campaign from making it onto the wider internet.