The landscape paintings of the 96-year-old black American artist Richard ­Mayhew encapsulate a story both ­personal and profoundly, if non-­traditionally, American. He has described his pictures as “internalised experiences on canvas” – but since he is part Native American, part African American he is also deeply aware that his nation’s non-white inhabitants have a historical stake in its landscape: as he says, “their blood is in the soil”. Not for him the old narrative of American manifest destiny, the westward march of white settlers and colonists – but something rather more tangled.

His pictures never show dramatic scenes, nor even picturesque ones. He chooses for his subjects unprepossessing corners of the land – patches of trees, the edges of fields and scraggy meadows, foot-widened paths and streams too slight to bear a name. He soaks them in colour so that they drip with violets, reds and greens that have an electric hum. In this, they hint at the intensified kitsch of the early 20th-century artist-illustrator Maxfield Parrish or, more elevatedly, at Monet’s haystacks and Rouen Cathedral paintings. People, however, are never shown in Mayhew’s pulsating realms – but their ghosts might be. He is drawn to “The feeling of the shadows in the trees” and those shadows can contain mysteries. “I went to a plantation in the South,” he once recalled, “and I was looking at the foliage in the trees around the place, and I said, ‘I wonder what happened in that spot over there?’” It is a line that brings a chill.

Mayhew was born in 1924 in Amityville on Long Island. His father was a house- and sign-painter of African-American and Shinnecock ancestry, his mother African American and Cherokee-Lumbee, which, as Mayhew puts it, “kind of makes me fifty-fifty”. He studied art in New York and learnt about European painting from copies of Apollo magazine his mother brought home from the houses where she worked as a domestic help. When war came he joined the army and, stationed in the south Pacific, rose to the rank of first sergeant in the marines. Between actions he would oblige his men by painting pictures of pin-up girls on the side of tanks. After demobilisation Mayhew became an itinerant artist, trying his hand as a ceramics painter, medical illustrator, courtroom artist, and children’s book illustrator. For good measure he also had a stint as a barrel walker and spent four years as a jazz singer in New York clubs, until he had his first solo exhibition in Brooklyn in 1955. 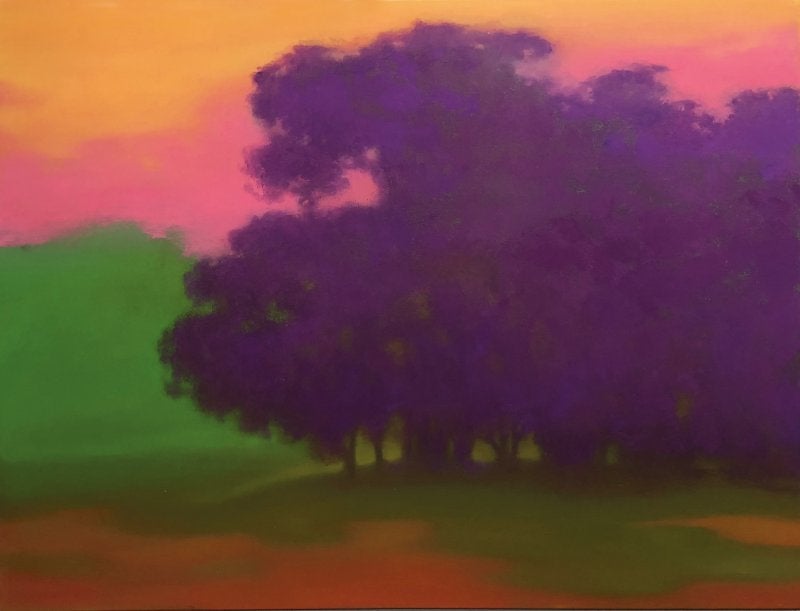 The influence of jazz on his paintings is palpable: his landscapes are essentially improvisations. Although he sketches from nature, he paints indoors and the pictures very rarely reflect a specific place (he says he feels “trapped” by his immediate response to each new landscape) but rather “a state of being”. He has criss-crossed America “six times over and six times back”, as well as spending two years in Europe studying colour theory – how colours act when placed next to one another – in order to paint “the essence of nature, always seeking the spiritual mood of the landscape”. This painting, Sonata of 2018, although more gently hued than many of his pictures, is typical of his work and exudes the numinous, albeit ­hallucinogenic, calm he strives for.

Nevertheless, his landscapes have a social message too – at least when the viewer is alerted to it. In 1963 Mayhew joined Spiral, a New York collective of African-American artists who met to discuss not just their lowly place in the American art world and what to do about it but how, as artists, they could engage with the civil rights movement. The group, numbering Romare Bearden and Norman Lewis among its members, lasted for only two years but was important in raising the profile of black artists. Several of the Spiral artists went on to make directly political art, but Mayhew recognised that his trippy bucolic was ill-suited to overt activism and directed his social energies into teaching instead. He established a multi-racial community arts centre in the Ramapo Mountains in New Jersey, and later took up posts at both art schools and universities.

A certain duality is nevertheless a consistent trait in his art. It is not for nothing that one of his favourite stories is of overhearing two gallery-goers discussing one of his pictures: “That’s Oregon,” said one woman. “No,” said the other, “that’s Scotland.” His landscapes are often two things at once; they teeter on the line between the representational and the abstract, and they bear the influence of both 19th-century romanticism, with its interest in pantheism and spiritual nature, and 1950s abstract expressionism, with its concentration on the emotion of colour and gestural paint. Mayhew knew many of the AbEx painters in their pomp but had his reservations: he recalls, for example, shaking hands with Jackson Pollock at the Cedar Tavern, an artists’ bar in Greenwich Village, and Pollock looking over his shoulder for more important people to talk to. Their work, though, impressed him with its spontaneity.

Above all, his paintings can be read in two seemingly antithetical ways; as a record of one man’s deeply personal sensations in front of nature, and as a sublimation of American racial history. “I’m painting ‘Forty Acres and a Mule’,” he has said, referring to the parcels of land and livestock promised to freed slaves after the Civil War that rarely materialised. “I’m painting the treaty land that was never honoured for Native Americans.” If his landscapes lack specificity – of place, time, even title (Good Morning, Overture, Sonata) – they nevertheless have to do “with Native-American and African-American artists heavily involved in the beauty of colour, feeling, mood. The land, the sky and the water, that’s it,” he says. “The two cultures overlap in terms of the land being important to them.”

At times Mayhew pushes back against the idea that his pictures are landscapes at all: they may look like landscapes, he says, “but that is not necessarily my preoccupation in painting”. They are instead spiritual moodscapes, but perhaps also the product of his search for “The Great Happening”, the ­moment – on and off the canvas – when everything comes right.

This article appears in the 24 Jun 2020 issue of the New Statesman, Political football